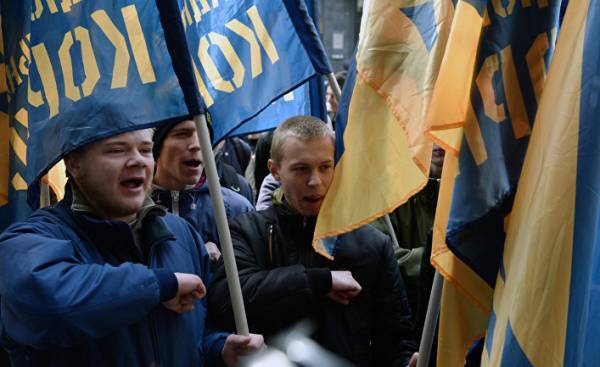 What is the biggest dream of Sberbank of Russia in Ukraine? To leave Ukraine as soon as possible. What is the purpose of the “patriots” of Ukraine? To drive the savings Bank of Ukraine at any cost. Any price for Ukraine. Why is it so often dream of “patriots” coincide with the Kremlin’s desire? It’s too often.

Russian banks in Ukraine fell into the trap. They understand that they have no future on the Ukrainian market. But I can’t leave. There are no buyers. They can’t sell the pot because no one is buying, and can’t just shut it down. In the end, they have to comply with stringent requirements of the NBU. For 2 years the Russian banks have got into the country 73 billion. Two-thirds of all direct investment in the country. Got to save the banks.

They can’t close the banks. But if Ukraine nationalisim them or do even something stupid, it will be a gift. They’ll just shrug. Served on Ukraine in court. And forget about the headache. And Ukraine will get it. In the form of a direct claim, and in the form of relations of investors to Ukraine. Very Patriotic.

Patriotism is a good thing. But the patriots have to think. Fighting ignorance is very costly for the country. Ask those who still remember 1918. The logic of the “Patriotic people” one to one repeats the logic of the Bolsheviks. And faces are the same, intelligence is not disfigured. And if you don’t think you’re dancing to the music of those who have thought.

It is necessary to think. Need to ask questions. In a survey on one channel to the question “do you believe that the blockade will stop the war” the majority replied “Yes”. Very curious to answer the question “how?”. As blockade stops the war? Clear, as does the trade. People either trade or fight. The more you trade, the less you shoot. It is an axiom. Weapons “there” is always, its free Russian supplies. And the less you have of the food, the angrier you. And how, in your opinion, anger and hatred stop the war?

Patriotism is a good thing. But militant ignorance under the mask of patriotism can destroy the country. And destroy. If people do not learn to think.