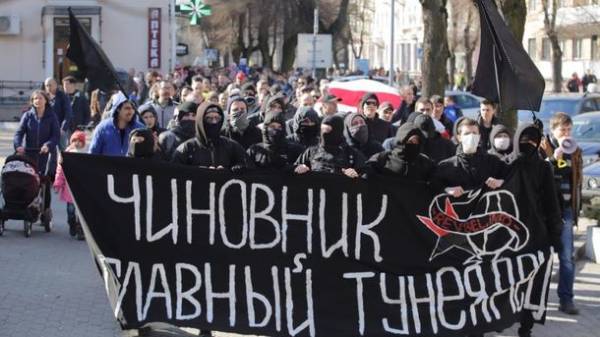 A court in Minsk region scheduled for 15 days of arrest the organizers of the “March of nazirmadov”: the head of the movement “For Freedom” Yuri Hubarevich and the leader of the United civil party Anatol Lyabedzka, the BBC reported .

Activists detained on Friday evening after the rally of opponents of the decree of the President Lukashenko, “On the prevention of social dependency”, which provides for an annual fee from the citizens that are not working.

Inconsistent with the authorities a rally in the town of Maladzechna, according to various estimates, went from 500 to 1000 participants. They marched from Lenin square in the city centre to the building of the local tax office to send back a resolution and to demand the complete abolition of the decree for the dependency.

Together with Lebedko and Hubarevich was detained several leaders of the Belarusian opposition.

Lukashenka’s decree provoked numerous protests across the country. Under the decree were individual entrepreneurs, Housewives who work without official registration, as well as those who simply cannot find work.

17 February “March of the angry Belarusians” in the center of Minsk came about two thousand people, in early March, about a thousand people came to the same action in Brest.

Amid protests, the President A. Lukashenko has frozen the fee “tax for parasites” for one year, instructing to modify the rules of tax collection from the unemployed.