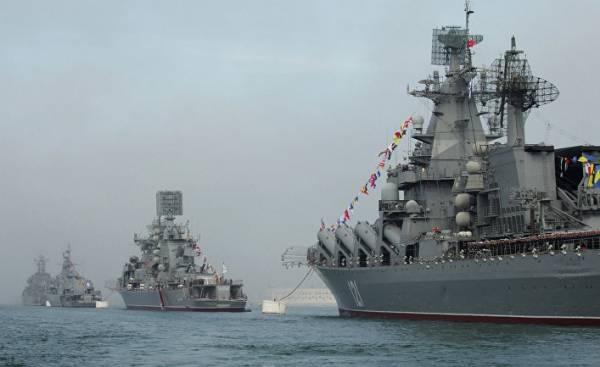 While naval maneuvers of China in the region of South-East Asia cause for concern American and its allies, relations between Russia and Japan are reliving the tension in the question of the Kuril Islands. NATO at this time faces a problem in the form of Russian presence in Eastern Europe, namely in Kaliningrad.

Two new Russian challenge in the Black sea and in Syria is threatening Turkey and NATO in the South-East. Professor of international relations at Galatasaray University in Istanbul bled Corcadorca and associate Professor of world history at the American University in Sulaymaniyah (Iraq), Baran Kayaoglu published in the journal The National Interest the joint study about these events and their impact on Turkey in particular. They argue that the activities of Russia in the Black sea and Syria makes Turkey to worry for several reasons. First, a disappeared relative naval superiority of Ankara on the Black, the Aegean sea and the Eastern Mediterranean. Secondly, there is a need of redistribution of resources from Ankara’s ambitious build-up of forces in the direction of developing strategies and weapons to counter the growing Russian influence in the region.

Corcadorca and Kayaoglu talking about improving Russian-Turkish relations in recent months, however, no one can guarantee the future of these relations. If there’s a crisis, similar to that which occurred after Turkey shot down a Russian plane in November 2015, Ankara will have a tough confrontation with Moscow. In may 2014, the Minister of defense of Russia Sergei Shoigu announced the allocation of $ 2.43 billion for a special program of the Russian Navy’s development and creation of land defense systems and deploy submarines in addition to those that are already in the Black sea.

The researchers also point out that Russia is actively developing offensive and defensive tools in the Black sea. It became clear in September of last year, when chief of staff of the Russian army Valery Gerasimov stated emphatically that his country has regained its dominance in the Black sea, which was lost and given to Turkey at the end of the last century. Moreover, if we move on to times kilometers to the South, on the shore, where the Syrian port of Tartus, the unfolding of a similar situation. There is a Russian aircraft carrier Kuznetsov with rockets of distant radius of action and missile systems “earth-air” s-300 and s-400.

Corcadorca and Kayaoglu believe that the current naval presence of Russia means the creation of zones of influence to the North and South of Turkey, and this seriously limits the country’s ability to maneuver at sea and in the air. Because of this, researchers have come to the conclusion emerged from Turkey of the need to reformulate its strategy of strengthening the naval forces, and begin to control the situation on the adjacent territories.