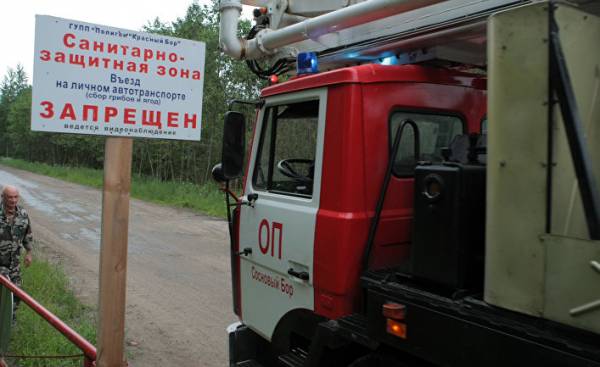 She comes from a landfill for disposal of toxic waste, located near the village of Krasny Bor. The fencing of landfill is on duty, local activist Victoria Markova. It comes down to a small ditch that goes from the pit to look at the brown ice.

The problem is located in the suburbs of Saint-Petersburg toxic waste dump “Krasny Bor” the last time we raised frequently in the Russian news, as threatening the Gulf of Finland poisonous wave finally attracted the attention of Moscow.

The leadership of the country and had raised the issue of “Red Bor”, and in early February the Minister of natural resources and ecology of Russia Sergey Donskoy visited the ground and announced that he was appointed Chairman of the group of specialists who will study the situation. His words caused a fragile hope from the neighbors.

At the same time deputies of Legislative Assembly of Petersburg intend to facilitate the transfer of the landfill Krasny Bor for disposal and clearance in Federal custody.

Landfill of toxic waste “Krasny Bor” is located just 30 kilometers from St. Petersburg for more than 40 years. According to some estimates, there are about two million tons of waste, any toxic substances there is − unknown to anyone.

When about a year ago, representatives of the newspaper Helsingin Sanomat took samples from one pit, were found, including polychlorinated biphenyls, cadmium, Nickel, pesticides and solvents.

Here the waste is no longer received. There are concerns that the pits, some of which, moreover, remains open can be overwhelmed, if the spring will drop a large amount of precipitation.

About “Red Bor” many said in print because shortly after the visit of the Minister of the landfill waste at the request of the representatives of Rosprirodnadzor was stripped of his license.

St. Petersburg authorities have opposed this decision as from-for it at the landfill site will not take any action. They even appealed to the Ministry of natural resources.

“We cannot allow the company stopped work on the isolation and neutralization of toxic waste. Especially in anticipation of spring floods. Without control, dangerous substances can get into the Gulf of Finland basin and the Baltic sea, and it will be an ecological disaster,” said Chairman of the Legislative Assembly Vyacheslav Makarov news Agency “Fontanka”.

However, as explained by the representatives of the environmental authorities news Agency RBC, the revocation of the license does not interfere to maintain order in the territory, including, to carry out anti-flood measures. But the system of operation of the landfill “Krasny Bor” does not meet the requirements for the processing of waste and creates the risk of groundwater contamination.

“But almost nothing has changed, right?” − it refers to the head of the rural settlement Yuriy Kvasha.

“Decisions are made, and do not do anything,” he replies.

“The problem has been known for more than 20 years. When Putin heard about the problem, saying that he was surprised. He thought that everything is already decided,” says Markov.

Kvasha said that he could not understand the sluggishness of the St. Petersburg authorities. Next to the “Red Bor” streams flow into the river, where the city receives drinking water.

“Finally, a high chief, Minister Donskoy, understand the impact of the “Krasny Bor” is having on the environment. Let’s hope that something will change,” − said Kvasha.

In “the Red forest” is the largest toxic waste landfill in the North-West region of Russia, exploitation of which began in 1970-m to year.

Finland raised the issue of the danger of the range for the Gulf of Finland even at the bilateral meetings of the presidents.