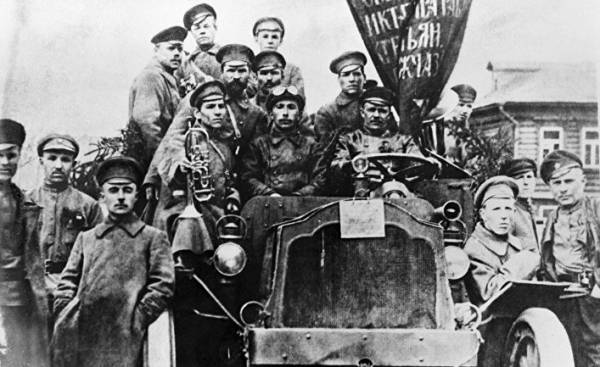 Petrograd, the Bolsheviks decided that on March 8, 1917 (February 23 by the old Julian calendar) used to strike, because “the party isn’t strong enough yet, and between the soldiers and the workers still lack a strong relationship” (Trotsky, “the History of the Russian revolution”).

But it was international women’s day, women workers of a textile factory disobeyed the Communist leaders went on strike and sent delegates to the metallurgists to sway them to his side. Thus began the February revolution — the days of the popular uprising that led to the abdication of the king (the Emperor) from the throne.

As proven by the capture of the Bastille, sometimes political leaders were carried away by the whirlwind, which they are not able to manage. However, in Russia in 1917, as in France in the late eighteenth century, the overall direction of the revolution were formed on the ideological battlefield.

Centrist and center-left parties that after the abdication of Nicholas II formed a Provisional government, imagined Russia as a constitutional and parliamentary democracy. The collapse of the Provisional government — crushed by the adversities of war, economic chaos and social disaster — is extremely important for understanding the coming to power of the Communist dictatorship, however, this factor alone is not enough.

Russian Marxists in 1903 was divided into Bolsheviks and Mensheviks. The split deepened, and in 1914 became a phenomenon in the international order. The dilemma was whether to support the government in the European war or to turn the war into a revolution.

The Bolsheviks, under the leadership of Lenin have long imagined the future of Russia as a drama in two acts, between which ran for decades. In the first act called “bourgeois revolution” of the tsarist autocracy was planned to replace a democratic Republic.

The second was to be “proletarian revolution”. The main place in this democratic Republic was to take socialist power. Nothing in this scheme were no signs of attempts to “accelerate the history” through the second revolution.

However, in April 1917, Lenin abruptly changed course. After returning from exile was given by the Germans of the train, where he successfully crossed the Germany controlled territory, Lenin put forward the slogan “All power to the Soviets”.

Based on the theses of Trotsky’s “permanent revolution”, the Communist leader refused the gap between democracy and socialism. “Power to the Soviets” (workers ‘ unions members) was the password for the overthrow of the Provisional government by the Bolsheviks. The prospect of multi-party parliamentary Russia disappeared with the revolutionary horizon.

On the night of 7 November (25 October), the party of Lenin stormed the Winter Palace. The October revolution was not a popular uprising, but the military operation carried out by soldiers of the Petrograd regiment and sailors from Kronstadt who obeyed the orders of the Bolsheviks.

The next day was open all-Russian Congress of Soviets, the national Assembly of workers ‘ deputies. In this small stratum of the Russian population, the Bolsheviks had a majority. In accordance with the expected scenario, the Soviets approved the Communist government established a few hours earlier.

In fact, the slogan “All power to the Soviets” meant the dictatorship of the revolutionary party.

November 25 elections to the Constituent Assembly. Its convocation represented a rare moment of consensus between the parties who opposed the tsarist regime. But the Bolsheviks saw him as a relic of the scheme, which preceded the return of Lenin.

In the Constituent Assembly the majority of votes were cast center-left parties (socialist-revolutionaries and the Mensheviks). The Bolsheviks and their allies got less than one third seats.

Lenin urged the members of the Constituent Assembly to endorse the decisions of Councils, in defiance of the elected Supreme power of the people. Due to the expected refusal of the Bolsheviks disbanded the Assembly force. The Communists did not need the support of the majority, they had enough company “historical patterns”.

From April to November, the left broke up into two irreconcilable camps. Lenin called the Mensheviks “garbage of history”. With these words he unconsciously opened the way for the totalitarian dystopia of Stalinism.

Meanwhile, defeated the Mensheviks were a source of inspiration for European social democracy. One hundred years later, after the February revolution, their legacy remains an important part of the political dialogue, which is not true of Leninism.