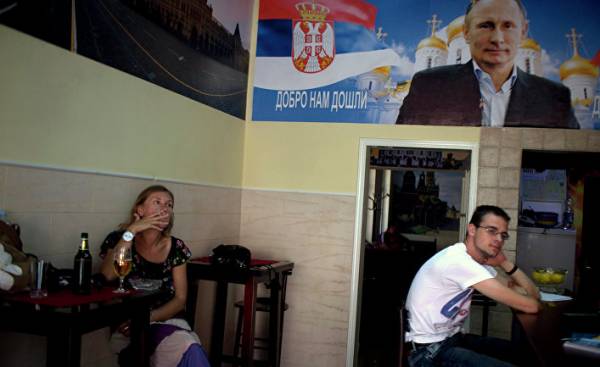 In the twentieth century, the West headed by the USA took specific geopolitical position towards the Balkans. Its essence is expressed in a policy of limited and controlled by outside tensions, all of the practical value of which is that if necessary, they can be used to achieve major geopolitical objectives of the West.

This well-mastered the recipe to control the unruly countries of the West should be in the new Millennium. Now, guided by the principle “what is good, it is not necessary to change” Western centers of power again, resort to provoking a new Balkan conflict, to the struggle with radical changes in the international arena to maintain its position in this part of the world. In recent months, South-Eastern Europe is again turning into a powder keg.

The main obstacle to complete domination of the West in the Balkans is, of course, Serbia. Being a traditional ally of Moscow and a state with a pronounced continental geopolitical nature, Serbia is a link between the Balkans and Russia. It is “open the gates” for the expansion of the Eurasian influence in the “belly of Europe”.

Therefore, any attempt of Serbia to strengthen its position the key of the Balkan States and as a factor of regional stability is a serious threat to commanding the seas of the West, which fears a full-fledged return of the Third Rome in the Adriatic and in Europe.

In other words, the idea of Euro-Atlantic partnership, which endured two major geopolitical monster of the modern world — the European Union and NATO seriously threatened the growing international role of Russia and its geo-strategic position in the Balkans.

Worried about the strategic Alliance between Moscow and Belgrade, the NATO attempt to destabilize the region and with the policy of controlled chaos to stop the further strengthening of economic and military influence of Russia in the region.

It is in this context that we must consider recent events close to us, the product mentioned the Western development paradigm of controlled tensions.

1. Direct intervention of the functionaries of the NATO in the internal Affairs of Skopje and attempts to form an (anti-Serb) the Macedonian government. The threat of armed revolution to advance the idea of “federalization of the state structure”, which openly supported the Albanian party in Skopje, but which actually marks the beginning of the end of the Macedonian state and its forced integration in the Great Albania.

2. Support the creation of a “Kosovo army”.

3. The organization of a coup in Montenegro with the aim to present Russia as the factor that threatens regional security, and to justify the continued existence of NATO.

4. The incitement of the authorities in Sarajevo to ensure that they initiated a review of the decisions of the past years in the International court and again raised the issue of “Serbian guilt” for the genocide in Bosnia and Herzegovina.

5. The tacit support of the revival of the policy of the Ustashi in Croatia and the recognition of Velikoivanenko ideas at the international level.

For these purposes, and founded the so-called Western Balkan Fund is a member of Kosovo as an independent state, strengthening the international position of Pristina as a subject of European political processes. For these purposes Pro-Western regimes in Zagreb, Tirana and Podgorica encourage NATO to strengthen its positions on the Balkans to Kosovo as a member and to strengthen the military component of the Albanian expansionism. For these purposes, the terrorist Thaci Duo — Rama incites to break the Macedonian constitutional order and calls the Albanians in the Balkans “to take their rights into their own hands” and move toward Albanian unification.

It was the support of the project “great Albania” is the basis of anti-Serb, and therefore anti-Russian policy of the West in the Balkans. It is through the actualization of the “Albanian question” created a new regional hotbed of tension. Start the process has put the desire of the Albanians to revise the boundaries and norms of international law, which led to the illegal separation wineservice region. In the end, all should lead to the creation of a “natural Albanian state” in the Balkans.

A crucial role is played by the European Union, who for many years was seeking gradually to deprive Belgrade of all the attributes of statehood. Brussels “saps” Serbia politically, economically and militarily, leading (extortionate) negotiations on accession to NATO, as the Albanian political factor in the region is growing.

Inhibition of Serbian integration, on the one hand, and (active) support unification of the Albanian ethnic space, on the other, that’s the core of the policy of Euro-Atlantic integration. It will inevitably lead to the breakup of the Serbo-Russian relations and to oust Russia from the Balkans at the geopolitical level.

There are many examples confirming that the current “sick of Brussels” in his desire to transform the Serbian people into a powerless mass of individuals without faith, language, state and historical traditions is very similar to the former “prison of Nations”, called Yugoslavia.

For a change we all know the popular expression of the time of communism, “the weaker Serbia, the stronger Yugoslavia,” it is the Anglo-American “the less Serbia, the greater Albania”.

For many years, there have been well-designed attempt, to take the form of different regional initiatives, homogenize the Albanian factor in the Balkans, to unify Albanian territory into one state formation, and the Serbian land for a long time to disintegrate and bring to the level of ordinary, fully separated from other occupied units.

Last year’s announcement of the construction of the highway NIS — Pristina really is a prerequisite for the operational functioning of the custom Union in the Balkans, conceived by Brussels and Berlin, and additional means of strengthening geopolitical Velikoivanenko vertical. This will create the conditions for further dissemination of militaristic and expansionist policy of the Tyrants in the region.

Our “friends and Western partners” are actively working to weaken the Serbian state. Going to their targets, they use the already proven methods of provoking an artificial crisis. Crisis, which should create a zone of tension around Serbia. And then our country will be intimidated by the appearance of a larger conflict that she willingly agreed to complete disappearance from the political map of the Balkans.

The ultimate goal of these planned conflicts to surround Serbia, to weaken its strategic potential in the Balkans and to prevent Belgrade has consolidated its sovereignty and revived uniting the state’s political idea.

The main reason for the new campaign of NATO on Serbia in an effort to once and for all exclude Moscow from the regional political processes. This should trigger the rejection of the only viable geopolitical double Euro-Atlanticism — the Russian concept of the “Balkan Quartet” (B4). In other words: “In the struggle for their influence, the West will do everything to prevent any attempt to create a Union of Serbia, Republika Srpska, Montenegro and Macedonia in the Balkans under the patronage of the Russian Federation”.

In the geopolitical context of Serbia it remains a few options. In fact, there is only one, the only option if we want to save our state. It is a sovereign policy! A policy that will give the West to understand that his anti-Serb political paradigm forever failed.