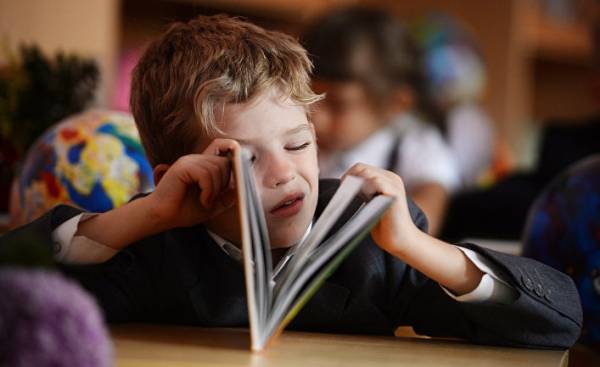 The Russian government is making active attempts to raise the status of Russian literature in schools. Authorities are considering whether to take over the old Soviet methods.

In Soviet times school literature lessons were of great importance, and was thus permeated with Communist ideology.

Today, the literature in school is given the same number of hours, but the ideology it is no more, and the status declined.

However, the interest of students in literature remains.

“We have quite a lot of hours of literature, where we do an analysis of the books. There we develop our Arsenal of analytical tools and generally find out why literature is so important,” says Konstantin Vladimirych, pupil of the 10th class of school No. 209 in St. Petersburg.

“In real life there are often situations reminiscent of events in the books. And if you are familiar with the literature, this knowledge can help to make the right decisions in everyday life” — said the schoolgirl Katya Polikarpov.

School No. 209 is one of the largest in St. Petersburg, there are 650 people. The building belonged to the school back in 1850-ies. Specialization — history and languages, but in the schedule there are four classes of literature in a week.

In the Soviet era the authorities were clearly determined which books everyone should read during their studies at school. The final exams were all essay in literature. Today the choice of topic is free, and the literature prefers only one of the eight students.

But, as before, the Ministry of education publishes a list of books for school reading. Basically it is the Russian classics of the XIX century.

Now, however, this list is only a recommendation, and teachers can choose which books to read with their students, and add what is not in the list.

“Sometimes you can add a small piece, but no novels — the disciples simply no time to read thick extra volume, — explains the teacher Tatiana Kopeleva. — You can take novels and short stories, but this is extra-curricular reading.”

The Ministry of education decided to limit this freedom of school choice and return to the Soviet system with the obligatory lists of references. Thus the authorities want to force the younger generation to read more. But there are other motives.

Today, Russia is becoming increasingly important religion and patriotism, including at school. And the Ministry hopes that the correct selection of literature will help to strengthen the love of youth to their native country, and perpetuate religious values.

“We are constantly talking about our “Golden Canon,” and, in my opinion, walking away from him, we have offended our young generation. Our own Soviet generation had access to it, and I think we need to fix”, — said the Minister of education Olga Vasilyeva.

In light of this new policy, the teacher plays a vital role to provide the right interpretation of the classics. The authorities expect a rebirth of patriotism by asking the right questions to the material.