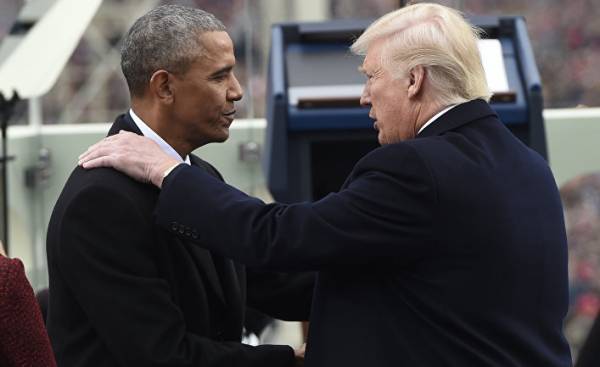 I want you to stand in front of a mirror.

Now imagine Barack Obama, since his inauguration which took place only 40 days, and who during his campaign repeatedly and inexplicably speaks highly of Russian President Vladimir Putin.

Now imagine that at the end of his election campaign and during the few weeks that followed his election to the American intelligence Agency come to the reasonable conclusion that Russia hacked into the system of the national Committee of the Republican party, and has published several thousand stolen emails, significantly damaged the reputation of his opponent.

And that the representatives of the election the Obama campaign vigorously denied the existence of any contacts and ties with Russian officials before or after the election.

Now imagine that shortly after the inauguration, it turns out that Obama’s adviser on national security lied about his contacts with Russian Ambassador Sergei Kislyak. In fact, he was talking to Ambassador in December, the very day when the outgoing President imposed sanctions against Russia in response to its intervention in the presidential election.

But the questions remain. Gradually begin to emerge new evidence that Obama officials had contact with the Russians during the election campaign.

Imagine that Obama continues to deny the conclusions of the intelligence community and to reject them, calling them “fake news” and criticizing the intelligence Agency for leaking this information to the media.

Yet calls to investigate the relationships of the representatives of the election headquarters of Obama with Russia grow louder, it turns out that Obama appointed the attorney General had been insincere during the hearings in Congress, lied in response to a question about his contacts with the Russians. He said that such contacts did not, however, it appears that he twice met with the Russian Ambassador, and one of these two meetings was held during the national Congress of the Democratic party.

Imagine how the attorney General convinces everyone that his meeting was part of his duties as a Senator, but then it turns out that the trip to this Convention was paid for from the electoral Fund of then Senator.

Under pressure from the attorney General Obama finally refuses to participate in the investigation of the connections of the members of the campaign staff Obama with Russia.

Now imagine that in this moment — remember, we are talking about the first 40 days of the Obama presidency — it appears that the dismissed adviser on national security Affairs met with the Russian Ambassador in the Chicago home of Obama, which was also attended by son-in-law of Obama. (You also need to imagine that Malia Obama is married and that one of the officials of the White house Obama recently attempted to advertise a clothing line Malia in an interview shown on national television. I know it’s hard, but try to imagine it.)

Imagine all of this. And remember that President Obama and members of his campaign staff a long time strongly stated that any contact with the Russians they had.

Now look in the mirror in front of you.

If all that were true, you would want independent investigation of possible contacts to representatives of the Obama team with Russia? You would have experienced the wrath?

If one of these questions you answered in the affirmative, but hold a different opinion about contacts between aides of Donald trump and Russia, you have to ask yourself: what is the difference between Obama and trump?

Now again look in the mirror, look carefully. Because you have to ask yourself one last question.

And I think you already know the answer.