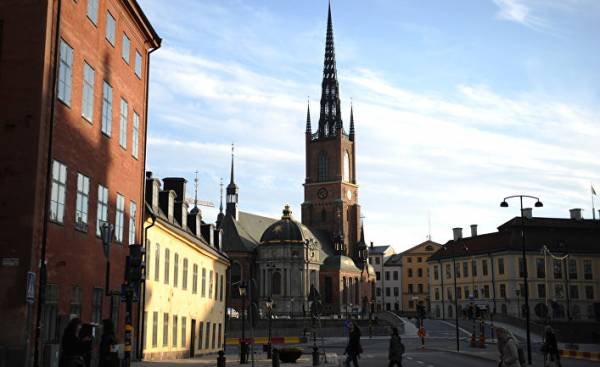 By a long and methodical work Russia is trying to recruit agents in Sweden to get to the information and try to influence Swedish foreign policy.

And SEPO and the Ministry of defence is aware of these attempts.

The other day Aftonbladet published an expose about what a member of the Green Party was forced to leave his post in Parliament. The official reason for this was a love story, but in reality, according to Aftonbladet, the reason was connected with the Russian policy.

According to information received by Expressen, the man also received gifts from their friends in the Russian Embassy in the form of gift cards.

According to the security police, some 15 countries conduct intelligence activities in Sweden. Typically, the purpose of this activity is to obtain information which may be useful for a particular country, but it may be different — for example, to affect the political interests of the country. Work is being done by intelligence officers, which are usually placed at the Embassy of the country. In Russian office of investigation is called a residency.

The work is long and structured. It starts with the analysis phase and continues with the phase of the search of the targets, in which the definition of the right people. Then examines the family circumstances of the selected individuals, their personalities and weaknesses. Only after this happens the first approximation. The first meeting is organized in a way that seems random and spontaneous. Then the phase of convergence shifts to friendship. Only then appears on the scene gifts. Relationships are built, sometimes for several years before there is a regular recruitment attempt.

Optional also that the victim understands that it is trying to recruit.

“As for knowing, that the person trying to recruit some know what’s going on immediately. Others did not understand this ever. In addition, the possible harmful effects and ways of influence on a person may vary from case to case,” says Simon Bynert (Simon Bynert), a spokesman SAK. He added, however, that all of this information must not contact any particular case.

“What it looks like in each case, I can not propagate. Partly because this information involves the privacy of the individual, and partly because we, in the worst case, can give ways own operational activities, commenting on the details of cases of this kind.”

Policies “green Party” was moved in Parliament in the spring of 2015. Later that year expired the term of his mandate, and after some time he left his political activities in the party and now works for the company, which including receives orders from the Swedish arms industry.

Only a small circle in the “green Party” seems to know the circumstances of the dismissal of this officer, and senior representatives of the party deliberately kept in the dark and did not intervene in this case. If this information reaches the public, were written detailed service information.

SEPO was also aware of the situation.

Defence Minister Peter Hultqvist (Peter Hultqvist) did not want to comment on the case of the politician of the green Party, but believes a well-known fact that Russia is spying on Sweden.

“I’m not going to go deep and talk about the case at all. But it is well known that Russia conducts espionage in Sweden. This follows for example from the annual report of SAK. For this you need to follow. It is good that the public is informed about it in different ways, because it raises the consciousness of people in this matter. There is interest in Swedish military structures and in the recruitment of different agents. There is interest to illegally obtain access to confidential information. I can only say that I’m not surprised that spying occurs and that can happen trying to recruit,” he said.

The incident is the responsibility of the chief of staff of the “green Party” Anna Stenvinkel (Anna Stenvinkel), but it is to give comments has refused. Her press Secretary Tangbo Pontus (Pontus Tengby) instead of notes referred to an interview she gave to Aftonbladet. In an interview with Anne Stenvinkel confirms that the official was relieved of his post, but says no details about the reasons, explaining that the party does not comment about the personal Affairs of a particular person.

Expressen tried to contact the official, but also with speakers of the green Party Fridolina Gustav (Gustaf Fridolin) and Isabella Levin (Isabella Lövin), but they also refused to comment.