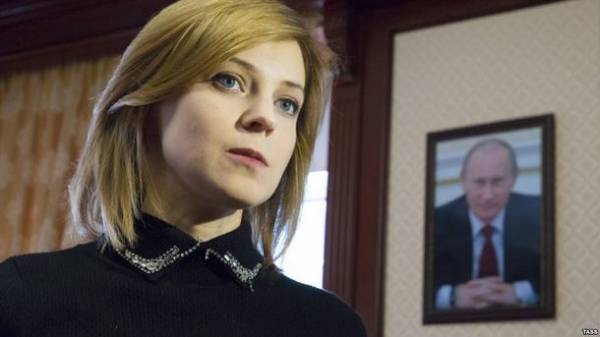 The former so-called “Prosecutor” of the Crimea, and now an illegitimate member of the state Duma of the Russian Federation Natalia “Nyasha” Poklonskaya recently disappeared from the sight of the media. So she decided to remind myself.

The day before she said that in the Russian-occupied Simferopol “zamirotochila” bust of Nicholas II.

“My employees call from the Crimea, the Prosecutor’s office, taking care of a chapel. You know, this morning, the bust of Nicholas II, the sovereign of our own, which we installed in the square near the chapel, zamirotochila!” she said.

According to her, to bust people with sick children, “to make them.” “It is a miracle that does not explain no scientist, no” added “nyash-myash”.

Statement Poklonskaya has inspired a wave of ridicule on social media:

When Poklonskaya in the Hague come off at the insanity, and then laugh.

There is a version that Poklonski in advance to mow the insane, to avoid the Tribunal in the near future.

Scientists have long noticed, where is the worst medicine and steal more, there is often streaming myrrh douche.

Gabriel bust was made of bronze
Gabriel began to stream myrrh.

Andrei, we have the bust. Perhaps the myrrh-streaming. For horses.

In Moscow sadangel a portrait of Igor Sechin

Social networks perfect: it turns out the investigation is about corruption, all discuss it, and then have some Poklonskaya zamirotochila bust. Corruption forgotten

And there is a video where Poklonsky streaming myrrh bust?

Poklonskaya usually something breccia after another shame on the authorities. And now, with Medvedev switched to her. For this, and it contain.

the shield that poklonski is a true symbol of the Crimea, it can be said, the essence of

We will remind that on February 21 , GPU caused Poklonskaya on Kiev for the presentation of new suspicions.