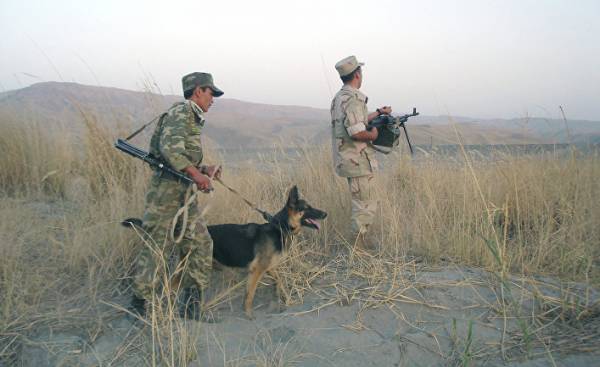 The visits that the President of Russia Vladimir Putin took place in Kazakhstan, Tajikistan and Kyrgyzstan, were regarded as efforts aimed at improving security measures in Central Asia, where, as noted, growing radicalism and terrorism.

In the last two days of February, Putin visited Kazakhstan, Kyrgyzstan and Tajikistan, where the Russian military facilities in Central Asia, in talks with leaders of those countries at the forefront of security issues.

While at the meeting of Vladimir Putin with President of Kazakhstan Nursultan Nazarbayev discussed issues of bilateral economic and trade relations, the talks with President of Tajikistan Emomali Rahmon was dominated by the topic of preventing the spread of the terrorist threat emanating from Afghanistan. The Russian and Tajik leaders agreed to make active use of the Russian base in Tajikistan to protect the Tajik-Afghan border to prevent the spread of ISIS (banned in Russia — approx. ed.) and other terrorist and criminal groups in Afghanistan.

And during the visit to Kyrgyzstan, Putin noted that members of the Organization of collective security Treaty (CSTO) will coordinate joint actions to ensure the region’s security and strengthen the military power of Kyrgyzstan.

The expert of the analytical club “Dalil+” Mars Sariev, who commented on the visits of President Putin to the country and they made statements to the Anadolu Ajansı, noted that more than five thousand people from Central Asia who are currently fighting in Syria are members of ISIS.

In the permanent truce in Syria terrorists through Afghanistan to return to Central Asia and create instability in the region. “Terrorists can sneak in through the poorly protected border of Turkmenistan and to enter the area of Aktau. There, terrorists can join radical local groups. As you may remember, last year in Aktobe city has been a series of terrorist attacks,” Sariev continued.

In addition, Sariev drew the attention of terrorists across Tajikistan to get to Kyrgyzstan and to reach the goal of destabilization in the Ferghana valley. “The Fergana valley like a cauldron, which can jerk at any moment. Because there are many groups of religious orientation. When the terrorists will be in Kyrgyzstan, radical cells, consisting of groups of 10-15 people who are now staying in sleep mode, aktiviziruyutsya”.

According to Sariev, with the infiltration of terrorists into Central Asia break out of these wars, which it would be impossible to intervene like in Syria, and Putin is concerned about this. Among these countries, which could erupt a war, Kyrgyzstan and Tajikistan, while in the military doctrine of these two countries, the priority is given to the defense.

In the future to prevent the spread of terrorism in Central Asia will expand the operations in Afghanistan, suggested Sariev. “Russia and the Russian military base Kant in Kyrgyzstan sent planes on a military base in Tajikistan. There is an active preparation. In the framework of the CSTO in Kyrgyzstan and Tajikistan are often held military exercises”, — said the expert.

To stop terrorism by military means is not easy

The expert of the Kazakhstan information-analytical centre “Caspian Bridge” Zamir Karajanov noted that Russia is concerned about the lack of stability in Central Asia. “Some of the processes that may start in the region could destabilize the region. The attack, which occurred last year in the city of Aktobe in Kazakhstan, acting as a stable country, shook the region”, — said the expert.

The participation of immigrants from Central Asia in the war in Syria — a problem for both Russia and Turkey, said Karaganov. He further continued: “to Stop terrorism by military means difficult, and Russia’s military presence in the region will not solve the problem. To combat terrorism it is necessary to improve the material conditions of people and development in the spiritual sense”.

The risk exists that those who went to fight in Syria will return back and will start to commit terrorist acts in the region, and to prevent this requires the active work of the intelligence services, the expert added.