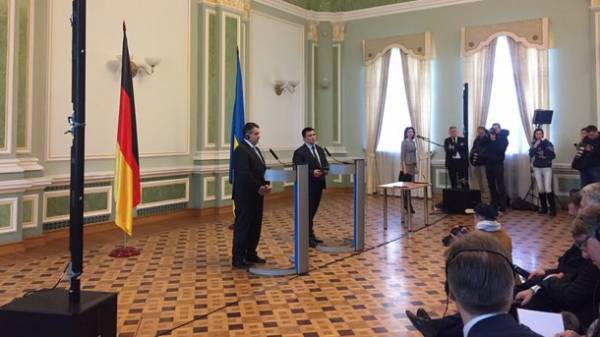 During the bilateral meeting the foreign Ministers of Germany and Ukraine discussed the expansion of work in the Donbas Special monitoring mission of the Organization for security and cooperation in Europe (SMM OSCE). This was at a General briefing on the results of negotiations with German foreign Minister Sigmar Gabriel said the Minister of foreign Affairs of Ukraine Pavlo Klimkin.

“We had a very good conversation which of course was primarily focused on what we can do together what we can do within the “Normandy format” to bring peace to the Donbass and force Russia to implement the Minsk agreements. Thanks to the initiative on the part of the Sigmar a few days ago in Munich (in the fields Mushashi security conference – Ed.) there was a meeting in the “Norman format” at the Ministerial level. We are now working on how to strengthen our OSCE SMM how to still achieve a real cease-fire. And most importantly, effective control of the SMM and clock control not only the contact line, but also the whole territory of Donbass from the uncontrolled part of the Russian-Ukrainian border”, – said Pavlo Klimkin.

Also, according to the head of the Ukrainian foreign Ministry, with his German counterpart, they discussed the humanitarian aspect, the political hostages, the results of yesterday’s meeting in Minsk.

“And that was our basic theme. But, of course, we also touched upon bilateral issues. I expressed gratitude for the assistance that Germany has provided us with very important help in many areas. We will expand this cooperation. We will expand, of course, trade and investment cooperation. Now we have General chamber of Commerce, today in Ukraine there are one thousand German companies. Just last year, with investments created almost 5 thousand jobs. We are all aware that now, for sure, no one car that is made in Germany, not made without certain parts, which produce in Ukraine”, – said Klimkin.

The Minister of foreign Affairs of Germany, in turn, promised to continue to help Berlin to the implementation of the Minsk agreements.

“Mr. Klimkin said that in the last days we met three times with each other, had a lot of telephone calls. And we can say that, unfortunately, the situation in the East of Ukraine is the dominant theme of our conversations. Intervention of Russia, the annexation of Crimea contrary to international law, Russia’s attack on Ukraine,” said Sigmar Gabriel.

He stressed that Germany remains faithful to all his promises of assistance to Ukraine.

Also, Sigmar Gabriel promised the help of Germany in the aftermath of the explosion at the mine “Steppe” in the Lviv region, where today killed 8 miners.

Recall, the foreign Minister of Germany, Sigmar Gabriel, March 2-3, visited Kyiv with the visit for meetings with the Ukrainian leadership.

Earlier Sigmar Gabriel said that without the implementation of the Minsk agreements, there is a risk of “intensive military escalation with many further casualties among civilians and the continuation of stagnation in the political process.”

On 18 February the foreign Ministers of “Norman Quartet” at the meeting agreed on the ceasefire in the Donbass. They also called for an end to the blockade of the railway and other paths in the Donbas.