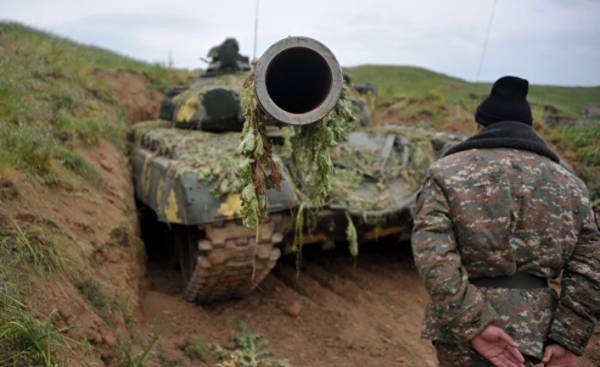 It was predictable that on the eve of anniversary of events in Khojaly Azerbaijan will take “something” on the line of contact with Karabakh. But this time this trick has played a cruel joke with Baku.

The day before the Khojaly events, on the night of February 25, the Azerbaijani side attempted sabotage on two fronts — Anka and Martuni, had grave consequences not for Artsakh, namely Azerbaijan.

The losses of the Azerbaijani side in the direction of Martuni were so great that in the ranks of Azerbaijan started to panic, like the despair which seized them in April last year, when Armenian troops launched a counter-offensive. In Azerbaijan again began to spread controversial news again began fleeing shepherds.

The excitement was so great that Azerbaijan did not even know how to introduce the public to the incident. And while the selection was stopped to limit the statement about the loss of five soldiers remaining on the contact line, one behind the other followed by statements of experts, representing the countries of the mediating OSCE Minsk group, and later the Declaration of the Minsk group of the OSCE.

In this context, special attention should be paid to the expert and former co-chair of the OSCE Minsk group, organizers of the Key West talks, Kerry Cavanaugh, the essence of which is that you need to fix the “attacker” and to apply to it sanctions, using the levers of the UN.

The current situations and the probability of a new fruitless visit of Minister of foreign Affairs of Azerbaijan Elmar Mammadyarov in Moscow made it clear that Baku does not have permission to start a new war April, but at the same time, there is no will and desire to implement the decisions adopted on the outcome of the April war in Vienna and St. Petersburg. Azerbaijan does not even represent its own public estimate made in the night of February 25, provocations.

Turkish foreign Minister, taking on the responsibilities of their Azeri colleagues, unable to respond, issued a statement confirming the Azerbaijani version of events, and called on Armenia to “monitor the ceasefire and to stop the aggression”.

Of course, do not be surprised the Turkish cynicism, because, if God forbid, the Azerbaijani infiltrators would have reached their goal, the Turkish foreign Minister has repeated the same song, but without the sympathy directed to the Azerbaijani people.

It became apparent that, although the co-chairs of the OSCE Minsk group, as before, his statements do not indicate which attacked the party, and the Ministry of foreign Affairs of Turkey continues to adhere to its racist positions, in total, the current situation is a new trap for the leadership of Armenia and Azerbaijan.

In the past such attacks the Ilham Aliyev administration took the image of a strong hand, gave to understand the co-chair countries, will continue the destabilization of the frontline, if they don’t start to realize welcome to Baku, the resolution of the conflict.

Now happens exactly the opposite. Everyone understands that the initiator of instability was the Azerbaijani side, which itself has suffered many casualties and with the help of the red cross trying to evacuate the bodies. So if Ilham Aliyev will once again turn to intermediaries, they very easily can make it clear — “who made the mess, let him disentangle,” and they wash their hands.

In such circumstances, a new visit of the foreign Minister of Azerbaijan Mammadyarov to Moscow becomes simply meaningless. Therefore, for the sake of the situation, Ilham Aliyev himself is forced to be sent to Ankara with the hope that perhaps Erdogan will tell him how to get out of the trap. It is obvious that the purpose of the visit stems from a desire to involve Turkey in Nagorno Karabakh conflict. At the same time, making Ankara a mediator of their relations with Moscow, Aliyev only tighten the already the clear position of Russia.

Moscow itself wants to become the main moderator of the Karabakh conflict settlement, but for this it needs time, at least until the end of expected elections in Armenia. It is also clear that the West will not mind a parallel with the process of the OSCE Minsk group mediation on the basis of the Madrid principles. However, the problem is that Baku wants to revise also the Madrid principles, while leaving aside their fundamental sense — the issue of implementation of the right to self-determination of Nagorno-Karabakh.

The Azerbaijani leadership now expects Turkey, as a regional power, getting involved in the process of settlement of the Karabakh problem, may make an opposition to the possible mediation of Russia. And the only “justification” of such involvement can be the threat of direct involvement of Turkey in the conflict. Perhaps this explains the recent military exercises of the Turkish troops near the Armenian border.

This means that the “hereditary monarch” of Azerbaijan, this time has far-reaching plans. And if these plans will receive final approval in Ankara, it is possible that we will be dealing with larger conflict than military action in April. As evidence of what was said, recall that last year, prior to his military adventure of Azerbaijan Ilham Aliyev visited Turkey and after the talks, Erdogan Aliyev Foundation was solemnly escorted to the airport for a very long time and shook his hand, wishing good luck in beginning with a few days later, the April war.

In the coming days, you need to be extremely attentive to the so-called “private” meetings and negotiations of Erdogan and Aliyev, never hiding their intentions. If repeated the scene of farewell with hugs and long handshakes, then Mr Ilham sends to war.