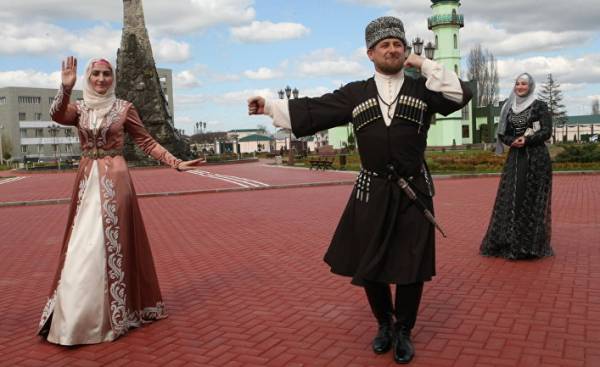 Loud dramatic music is heard in the sports hall in Grozny. Variegated light from the darkness snatched the exultant crowd, the Boxing ring. “Akhmad Kadyrov” — shouts intoned the moderator, introducing the fighter in the red corner. That just turned ten years old, his height is 145 cm.

He is the son of Chechen President Ramzan Kadyrov. There is another little boy, Damir Showhouse, he is presented as “Circassian”. The battle begins, the audience whistles.

14 seconds later a small “Circassian” lying on the floor, knocked out. The President’s son freaking out and jumps around and beats his fists tight around the ring the grid. “Akhmad Kadyrov struck a great blow into the case,” says the moderator. His opponent lies prone. “The doctors once again put him on his feet. Akhmad Kadyrov hit his liver.” The winner is declared. Defeated Showhouse looks like tears.

This evening two of the younger son of the President will be in front of the public to fight and win. Father sitting in the audience watching and applauding graciously. Later Kadyrov published a short video footage of combat in Instagram. Combat sport for men is developing at the highest level. And their sons as Kadyrov’s raising a little macho.

In November coach children as a gift to learn the Porsche Panamera — like from the younger children. They already have cars of class “luxury”. One of the sons, Adam, on your eighth birthday last year got a sports car Mercedes SLS AMG camouflage coloring.

“A true horseman”, a courageous and dexterous rider and a fighter — that’s the standard idea of the men in the Russian region of North Caucasus. But in reality, men are torn between ancient rhetoric and contemporary reality. They suffer from unconscious fears that they have no right to Express. In the family they use force, and in politics is powerless.

In the Muslim republics living together more and more determined by religion, but also old customs and secular laws that contradict each other. Impotence and inability to focus often result in violence or radicalization.

On the situation of women in the North Caucasus, their rights and domestic violence a lot is known, but of similar men, the little. It made the Chechen NGO Sintem, together with the Fund name Henryka Boll and sociologists from Moscow to study the status of men.

“Where is stronger the Patriarchy, the pressure on women and men, more, — said Irina Kosterina, gender coordinator of the Heinrich böll Foundation. All the time to be a true horseman, a real man, to control everything and for everything to be responsible is a heavy burden”.

Employee Sintem tell that by answering the researchers questions, many men have received a rare or even first ever opportunity to talk about their own problems. That’s why more men want to participate in the survey although questionnaires had accumulated enough.

For men from all the republics of the North Caucasus family comes first. But the role of the head suggests that he is responsible for women for the spouse and for unmarried sisters. “You always answer for everyone, as for cousins, for their children, nieces and nephews,” says 27-year-old Chechen Ahmet. Public opinion, neighbors of the accused man, if the women of his family behave “inappropriately”. Speech can go even about a loud laughter with friends at the Mall. Absolute taboo for women in the North Caucasus is sex outside of marriage, and for men the opposite.

In emergency cases, still sometimes there are murders of women that from the point of view of a Patriarchal society behave “immorally”. Ahmed condemns the killings and any form of violence against women. But he says: “a woman’s chastity is the family of great value to all relatives”. Domestic violence, which is a big problem all over Russia, the North Caucasus republics — business as usual. “Some men can easily tell that they beat their wives,” reports Dempsey from the Fund Boll. Men often shift the responsibility on women: they had to know or feel how they should behave in order not to be “punished”.

But violence contribute not only to the tradition. The political and social situation of people in these countries also contributes. The ideal image of a man who provides for his family, always strong and courageous, in practice almost no one can match. Men in the North Caucasus see their biggest problem in the economic situation. Almost everyone who belongs to the elite around the powers that be, it is difficult to get a good job and a family to feed.

Another problem, which is particularly evident in Chechnya, is injustice. Proud Chechen man at the mercy of the authorities and must fear that criticism of Kadyrov anytime he can be publicly humiliated, kidnapped or killed. “When a man is under pressure from the powers that be and public opinion, it leads to domestic violence,” says Dempsey.

After the collapse of the Soviet Union in the region have greatly increased interest in Islam. The consequence was a kind of regress: the younger generation is more religious than a generation of Soviet-style socialized parents. Sometimes it leads to conflicts. So, in one family in which the father during the holidays is always willing to stop drinking alcohol and thus consistent with the usual in the Soviet Union the image of “real men”, the daughter against the wishes of the parents wear the hijab (head scarf that leaves open only the face).

Religion casts out the old values of traditional village communities. Islam manifests itself in many different forms. “Some Muslims use Islam to oppress their wives, says Dempsey. — Others say: who am I to decide something for you? You’re a Muslim, I am Muslim, so we are equal”.

Islam in the North Caucasus has spread polygamy. It existed in the Soviet Union, but only secretly. Now it is legitimized by the Sharia. In Chechnya men openly talking about the fact that they willingly took to himself a second wife, if I could master from a financial point of view. President Kadyrov expressed the hope to allow polygamy.

Sociologists observe that many men are using Islam to break up with village norms. The first wife in most cases is chosen by the parents. It should be respected, but love is not required.

Second wife the man himself is looking for, she accompanies him on trips and in society, thus, it is more about emotional intimacy. For women the situation is more problematic: some of them voluntarily become “second wives”, the other makes a family.

For some men the Islam in its most radical form became a means of protest against social injustice and oppression. Years young Chechens and Dagestanis join the Islamist underground. Many of them are fighting in Syria on the side of different groups, including “Islamic state” (organization banned in Russia — approx. TRANS.). There they are considered to be particularly brave fighters, they are often sent to the front.

“There is injustice, and all can see her, explains Dempsey. Jihad offers answers, promises an ideal and fair state.” Less religious in the Republic of Kabardino-Balkaria radicalization, too, has become a big problem. 28-year-old Martin from this region sees one of the reasons for the inability to determine orientation.

“Young people do not know what is good and what is bad. There is a certain system of values,” he says. Many are literally torn between modern, new religious and traditional values. It happens that someone who is not religious, within a few months becomes a radical.

Martin from Kabardino-Balkaria and Ahmed from Chechnya together with other young men took part in a number of activities that the Boll Foundation has organized the completion of the work. They learned to speak about their own weaknesses and mistakes, and had a discussion about fathers and children. Some now want to change something in their country, others in the family.

Ahmet began to think about why he is in the presence of his father never plays with my own children. According to Chechen traditions is unworthy, the father is responsible for monitoring, not for emotional intimacy. “I do not forbid, but somehow I was rooted confidence that you can’t do that,” says Ahmet.

Now he decided to let my kids. If it’s raining and they want to play in the puddles, he calmly looks at it. “They need to discover the nature and the world”.