During the cold war in the middle East there was a system of collective security: the Baghdad Pact. The Treaty was signed in 1955 and dissolved in 1958 Iraq revolution. The Pact was signed by Turkey, Iraq, Britain, Pakistan and Iran. USA acted as the observer. The purpose of the agreement to protect middle East from Communist and Soviet threat. Since then it has been more than 60 years, and now the balance of power in the middle East has completely changed.

In January of this year, Astana hosted the peace talks on Syria. They changed the structure of the middle East crisis and geopolitics in Eurasia. The fact that Russia, Turkey and Iran formed an Alliance in order to solve the Syrian problem and to destroy the “Islamic state” (banned in Russia — approx. ed.).

Russia and Turkey were in confrontation due to the fact that Turkish troops shot down a Russian plane in November 2015. Between Turkey and Iran had a strained relationship in connection with ground operations in Syria. Russia and Iran have supported the Assad administration to recapture lost ground. Despite the clash of interests, these three countries are responsible Nations, as they can openly tackle the Syrian problem.

This contrasts sharply with the removal of the Obama administration from the Syrian issue and the EU does not interfere. The presence of these two parties that do not propose specific options of the Syrian settlement through the UN, practically is not felt. Even the statement of Assad that order and stability is much more important than the idea of a security zone proposed by trump, look more convincing.

The Turkish military campaign was to oust Islamic state from the border regions and to divide the people’s protection Units into two parts: Eastern and Western.

While for Russia the emergence of a Shiite forces or new Persian Empire from Tehran to Baghdad and from Damascus to Beirut is nothing like a threat to military interests and the sphere of political influence, which she provided to the East of the Mediterranean sea and Syria.

To restrain the excessive growth of Iran’s influence can only be a traditional ruler of Sunni Turkey. President Putin has sent Chechen troops Sunnis in Aleppo, due to which he managed to contain Iranian power.

Iran took a temporary Alliance during the meeting in Astana because the President trump took a hard line against Iran. The US has already signaled that the confrontation with Iran began in Yemen. Tactical Alliance of the three countries is the political quintessence of the three superrealist: Putin, Erdogan and Khamenei. The position of Assad also unsafe.

It seems that one adage has forced Erdogan to change his attitude — “if you can’t defeat your enemy, become his friend”. This does not mean that the Union of countries with different interests will last longer than a three year old Baghdad Pact. 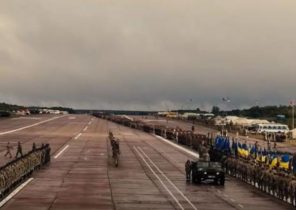 At the parade Independence Day there will be surprises: details from the military