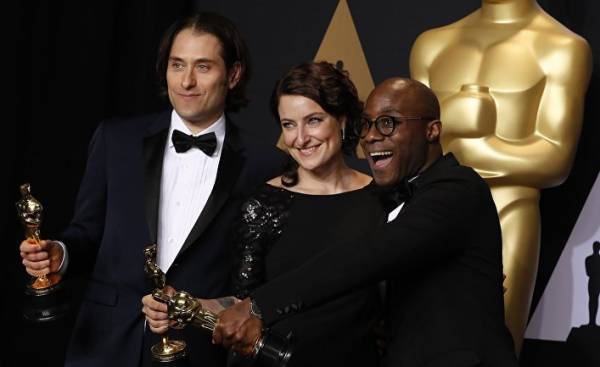 It seemed that on the 89th of the ceremony of the Academy awards most nominations will take “La La land”. The Director of the musical Damen of Sazell (Damien Chazelle) won the Oscar for best Director, his star Emma stone (Emma Stone) was awarded as best actress, and many already thought that this project — a sort of nod to the old Hollywood is sure to be named best film.

Although many were rooting for “Moonlight” is a non — profit cinema dedicated to the thrilling story of growing up black men, it became clear that the jury has once again opted for the safe option.

The creators of “La La land” came on the scene and began to receive awards and to thank those who supported them, but there was one problem — in fact, their film didn’t win. It turned out that Beatty and dunaway made a mistake, and the prize was awarded to “Moon light”.

Here is such a “sudden plot twist”!

When the creators of “Moonlight,” I realized that they are the real winners, they got up on stage and Director Barry Jenkins (Barry Jenkins) told the audience: “I never even dreamed of, but damn the dreams are reality!”

After the unexpected victory of the “Moonlight” Twitter exploded with congratulations:

Late in the Moonlight…hour God’s gonna turn it around…

@AfricanDad At a late hour, in the hour of “Moonlight”… God will reward all merit… (allusion to the gospel “We are blessed” — approx. TRANS.)

This was literally me when they announced La La Land and then Moonlight really won pic.twitter.com/9ztFCH8ZNG

​
@MatthewACherry this is how I looked when first announced “La La land”, and then defeated the Moonlight.

@zblay Is the victory of each black man who was forced to watch as white praise mediocrity. Squeal with joy.

O. M. G!!!!#Moonlight won Best Picture! I’m not even gonna look at the accidental announcement of that other movie. The fuck?! #Oscars

@ItsNasB my God!!!! “Moonlight” is the best movie! Not even going to watch accidentally announced another film. What the…?!

Samuel L. Jackson IS CRYING!!!!!!!! He knows how important this is to the culture! #OSCARS!

​
@BritniDWrites Samuel Jackson (Samuel L. Jackson) is crying!!!!!!!! He understands what is important for the culture!

​
@merelynora awards Transfer crew of the “La-La land,” “Moonlight” is our reparations.

​
@ConstanceWu’m thrilled for “Moonlight”!!!! It breaks my heart!!

Congratulations to the Moonlight team. It truly is a beautiful film. Well done

​
@johnlegend Congratulations to the crew of “Moonlight.” Great movie, keep it up!

YAY MOONLIGHT. So elegant and moving and passionate and tender.

Congratulations to Barry Jenkins and crew of “Moonlight” with the main film award!