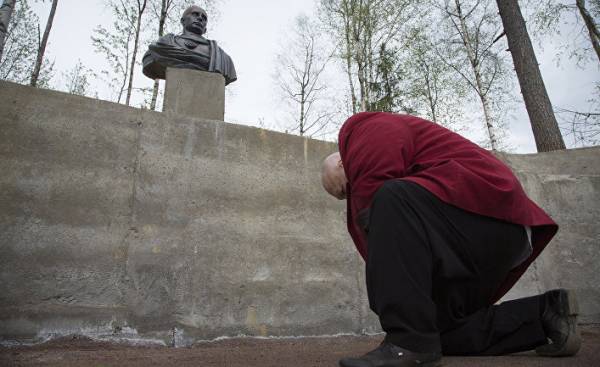 Near Petersburg local Cossack brotherhood, a monument to Vladimir Putin. The Russian President is depicted as a Roman Emperor. His shoulders covered by the toga, on his chest — a medal with the Russian coat of arms. At first glance, this seems exaggerated demonstration of loyalty members paravenous public organizations and quite comical flattery of the ruling elite. What does Putin have to do with Rome, what the hell is that? But can this be considered just clowning?

Looking at dressed in Cossack uniform men who stand guard at the bust of “the Emperor”, have the feeling that we are dealing with a serious signal — with the desire of the ideologues of the Putin regime to create an iconic image of the leader, to canonize him. Now the bust is made of temporary material, and later he is to be cast in bronze and to increase the size twice. The first attempt turned out pretty invisible — it’s like probing people’s reactions, finding the most effective ideological reversal of the mill, so in the minds of the Russian people, Putin has consolidated as the Messiah for Russia.

We are talking about the concept of “the Third Rome”. It is quite capacious for a flattering consciousness of the Russian people and praised the Russian election term. The statement “eternal Rome” it is very symbolic since ancient times. In ancient times Rome was the symbol of the world ruler, and all roads led to Rome. With the collapse of the Roman Empire split and the ancient Christian world. Part of the Christians remained loyal to Rome and the Pope, and the other part began to call themselves Orthodox. The Orthodox Church has found a home in the Byzantine Empire centered in Constantinople. Adherents of the Orthodox Church began to call Constantinople the Second Rome. The Slavic tribes their religion — Christianity — borrowed from Constantinople of the Greek Orthodox Church. Over time Constantinople was under Turkish rule.

Among the Orthodox there was a split under which the Russian Orthodox Church separated from the Byzantine Church and declared his center of Moscow. Since then, the Muscovites began to call itself the Third Rome — the last and the eternal. They said the Third Rome will eventually become ruler of the world, because the first two are no more! Here, the explanation for the bust of Putin in the clothes of a Roman Emperor, but with the symbol of the Third Rome — the two-headed eagle — on the chest. The Russian President is the ruler of the Third Rome, the purpose of which is to make Moscow and all Russia a world center!

In truth, the Russian legend of modern times has created a full swing. In Russia filmed powerful, most expensive time of the movie “Viking”. This epic tape, you can also watch in the cinema Riga. No one can convince me that Putin’s Russia can create a movie with multi-million dollar budget just.

This ambitious film contains a clear ideological message. The story tells about ancient Russia, Prince Vladimir Svyatoslavovich, the king who converted Russia to Orthodoxy. It remains to add together two cornerstones who, in all probability, laid the basis for today’s Russian legends. Saint Vladimir introduced in Russia Orthodoxy, Vladimir Putin makes of the Orthodox Russia — the Third Rome — the ruler of the world. No more and no less. And not so the absurdity of the bust of “the Emperor” at the walls of St. Petersburg.