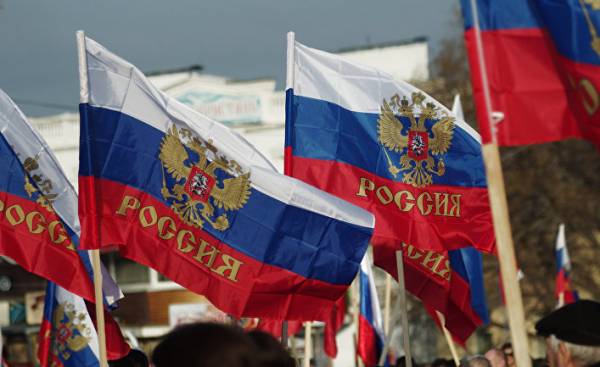 Meeting 26 February, which three years ago resulted in a confrontation between supporters of Russia and Ukraine on the Crimean Peninsula, began the illegal process of annexation. After this meeting the Pro-Russian armed force, the so-called “green men” seized buildings of the Crimean Parliament and government, and the Parliament at gunpoint, took the decision on the referendum.

The illegal annexation of the Autonomous Republic of Crimea, which was part of Ukrainian lands was under the sovereignty of Ukraine, from Russia began three years ago with “the events of February 26”.

While on Independence Square in Kiev continued protests launched by supporters of the West in late 2013, former Ukrainian President Viktor Yanukovych was forced to flee to Russia. After the control of the Kiev administration has assumed a Pro-Western group, the Crimean operation Russia has gained momentum.

When during the Kiev demonstrations, security forces opened fire on protesters and killed about a hundred people, it divided the society in the Crimea, as well as throughout the country, supporters of Ukraine and Russia.

Demonstration of supporters of Russia entailed the mobilization of the Crimean Tatars. At this time, the Crimean Parliament has not followed any appeal for calm to the inhabitants of the Peninsula in connection with the alarming socio-political situation in the region and the country.

The visit of the speaker of the Crimean Parliament Vladimir Konstantinov in Moscow contributed to increased Pro-Russian sentiment and forces in the Crimean society. During this visit, Konstantinov expressed the idea that in the case of the departure of Yanukovych from the post of President of Crimea should secede from Ukraine.

The creation of a new Pro-Western interim administration after Yanukovych fled the country, led to further activation of supporters of Russia in the Crimean Peninsula. In different cities began to be active military units that were at the Russian base in Crimea.

However, the movement of these groups on the Peninsula and their action was contrary to the agreements that were signed between Russia and Ukraine on 28 may 1997 and 21 April 2010 and regulates the position of the Russian black sea fleet.

One of the reasons that contributed to the growth of tensions on the Peninsula, was the fact that the Chairman of the party “Russian unity” Sergey Aksenov contrary to Ukrainian law have created a paramilitary regiment consisting of three and a half thousand people called the “militia forces”.

Moscow to accelerate these initiatives was sent to the Crimea delegation of deputies. Arriving on the Peninsula, the delegation headed by the Deputy of the State Duma Leonid Slutsky met with the leader of the party “Russian unity” Sergey Aksenov and a member of the Crimean Parliament Sergey Cecevim. Tsekov in its statement, expressed readiness for rapid decision-making, accession of Crimea to Russia.

After Parliament speaker Konstantinov announced the intention to discuss the question of the referendum the next day, the party “Russian unity”, who wanted the annexation of Crimea to Russia, decided to hold a rally in front of the Parliament of the Autonomous Republic of Crimea. The Mejlis of the Crimean Tatar people, who spoke for the integrity of Ukraine, also announced the intention to hold a rally on the same day, February 26, in the same place, in front of the Parliament building.

After this decision, the paramilitary forces, illegally, Aksenov, surrounded the Parliament building.

26 Feb 2014 in front of the Crimean Parliament was held large-scale rallies, during which the Majlis of the Crimean Tatar people clashed with the party “Russian unity”. With the aim to prevent the adoption by Parliament of decisions related to the separation of Crimea from Ukraine and support the territorial integrity of Ukraine the meeting was attended by more than seven thousand activists, mainly Crimean Tatars. Crimean Tatars in front of the Parliament were opposed by about five thousand Pro-Russian activists, demanding the annexation of Crimea to Russia.

In fights that occurred during these protests, two people died. Because of these developments, the Parliament failed to discuss the topic of the referendum, which was to lead to the secession of Crimea from Ukraine. But that night, Pro-Russian armed forces in uniform without emblems and insignia, the so-called “green men” seized buildings of the Crimean Parliament and government.

The Parliament of the Autonomous Republic of Crimea, which met on March 6, under the supervision of armed Pro-Russian “little green men” at the meeting about the future of the region said about the decision to hold a referendum on joining the Crimea to Russia.

From the very first day Pro-Russian forces of armed militia, who worked on a regular basis, put pressure on the Crimean Tatars and Ukrainians, trying to get them to leave the Peninsula.

On the so-called referendum held on 16 March under the control of “little green men”, the decision was made on the accession of Crimea to Russia.

21 March in the Kremlin the President of Russia Vladimir Putin signed a law on “accession of Crimea and Sevastopol to Russia” and “creating new regions”, thereby endorsing the illegal annexation of the Peninsula.

The third anniversary of the “events of February 26” the leader of the Crimean Tatar people, Ukrainian MP Mustafa Abdulcemil Kirimoglu (Abdülcemil Mustafa Kırımoğlu) in an interview with Anadolu Ajansı commented on the illegal annexation of Crimea.

Kirimoglu, noted that the deputies were under pressure so they wrote a letter on the annexation of Crimea to Russia. “Crimean Tatars gathered in front of Parliament, not allowed to do this, they drove out Pro-Russian activists and did not allow them to realize their intentions. But that night, in the morning, armed men of Russian special forces, the so-called “green men” without insignia, seized the Parliament and government. Then from Kerch in the Crimea began to come in tanks and helicopters. Thus began the Russian occupation”.

Mention on 26 February rally, Kerimoglu recalled that some Crimean Tatars were imprisoned, and as grounds for arrest was given as holding a “rally without the permission of Moscow.”

Kirimoglu emphasized the desire to tell the world about these injustices: “Now, as under the Stalinist regime, on the Peninsula of the Russian security forces conduct daily raids in the homes of Crimean Tatars, schools, mosques.”

Kirimoglu drew attention to the fact that nobody in the world knows about the real events in the Crimea. “Russian propaganda is very strong. The OSCE, in the European Parliament they have paid members. In the parliamentary Assembly have their horns. But despite this, we are trying to tell the world community about what’s really going on”.

Kirimoglu also noted that the position of President of the United States Donald trump in respect of the Crimea has changed: unlike the election campaign, now he insists that Russia must return the Crimea, and expresses the need to maintain sanctions.