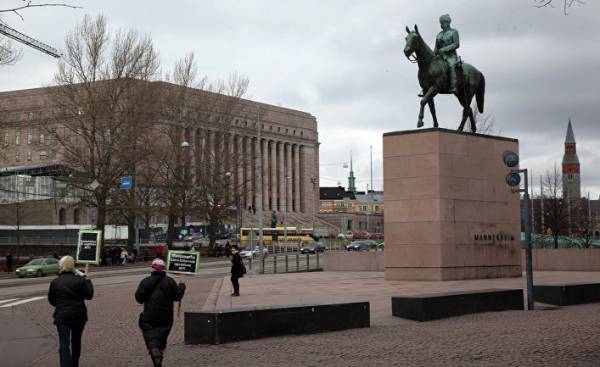 The flight of Vilho Pentikainen (Vilho Pentikäinen) in the Soviet Union brought down the entire spy network in Finland.

Journalist Martti Backman (Martti Backman) in his book “Spies” (Vakoojat) returns the reader to the difficult period of the history of independent Finland. The book presents both known facts and elements of fiction.

In the book “Spies” tells about a case which at the time was known in Finland as “the great spy scandal”.

The scandal broke when the Lieutenant of the Chief of staff of Finland’s Vilho Pentikainen fled to the Soviet Union in 1933.

Prior to that, he for many years gave the Soviet Union information about the plans of the Finnish defence, weapons, plans for the conduct of operations at sea and many other secrets of the country.

To this end, Pentikainen mostly used his night shift at the Main headquarters, which was then located in the former office of the secret police of the Russian Empire in Helsinki.

He photographed at night, the documents and send them through an intermediary for making copies, even outside of the building. In the morning he returned all the secret documents in the safe, and no one noticed the incident.

Sensing danger, the spy decided to defect to the Soviet Union.

Only at that stage, the Central criminal police of Finland on the trail of an espionage network which worked Pentikainen. Thanks to a happy coincidence, many detention and interrogation network collapsed like a house of cards.

The tentacles of the spy organizations reached out to different countries, so the revelation of the spy was a great win for a long time headed the Central criminal police Riekki Esko (Esko Riekki).

Based on these data, Beckman creates a suspenseful piece that begins with a story about how Pentikainen hiding in the Soviet Union, and ends with the appeared information about his life in Russia in 2007.

If you believe this information, Pentikainen, despite rumors, was not able to return after the continuation War (Soviet-Finnish war of 1941-1944) Finland as a member of the allied control Commission. In 1941 he was detained in the Soviet Union on charges of spying for Finland (!). The following year he died in a prison camp.

Beckman jokingly writes about the fall of a spy network, and tells how the Central criminal police of Finland catches useful idiots, austere Communists and the big boys system. In the book there are pictures of them all.

The most memorable character is a Mary-Emma schull (Marija-Emma Schul). Born in Riga, the waitress led espionage activities in Helsinki, posing as an American public figure. Resistant woman did not survive the interrogation and received nine years in correctional prison.

Shul is missing from the pages of history during the continuation War, when it was transferred to Nazi Germany.

Possible feelings of these people who lived so long ago, their reasoning and way of thinking is what makes this work, based on facts, more like a documentary novel. Beckman, however, not very actively uses the techniques of fiction, and many of the characters remain unexamined.

Pentikainen given special attention. A traitor is in the book and how the home life.

The great merit of the book is that it brings together large amounts of information scattered across different sources.

All of these sources are listed at the end of the book. Notably, Backman received most of the information from the interview, which he took himself.