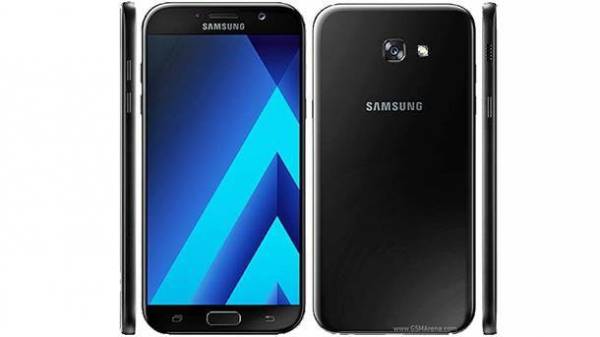 Noticeable upgrade was received by all members of the line, including the older model – the A7. The most expensive member of the galactic trio has some hardware improvements in the chip and memory. The device has received more capacious battery and the new advanced cameras.

Updated Galaxy A7 looks like a real flagship. Externally, the phablet resembles the Samsung A7 through the elegant combination of aluminum frame, 2.5 D curved glass Corning Gorilla Glass 4 and identical elements on the front panel. The glass covers the body from all sides, adhering to metal without any gaps. 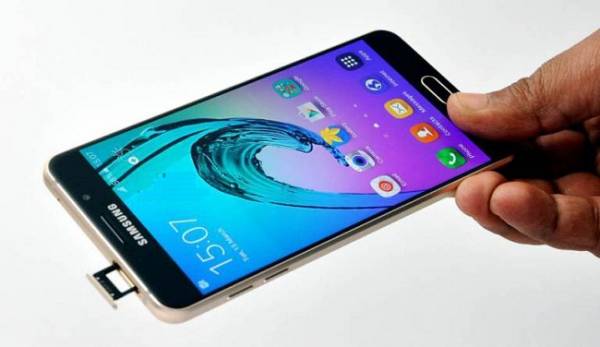 A sealed enclosure has dimensions of 156.8 x 77.6 x 7.9 mm. last year’s Model was already slightly shorter and thinner. Like the previous version, the A7 (2017) fully protected from dust and is not afraid of a 30 minute immersion under water to a depth of 1 meter (protection class IP68).

Display updated devices increased from 5.5 to 5.7 inches, keeping the same resolution. The increase in 0.2-inch impact on pixel density Super AMOLED-matrix – it has decreased with 401 ppi to 386 ppi.

The changes were all internal components except the RAM – noted in Foxtrot. Responsible for the performance of RAM with the same volume of 3 GB. Improvements have been made system-on-chip – the new version is 7580 Exynos Octa (1.6 GHz) installed 7880 chip Exynos Octa (1.9 GHz). The performance gain is confirmed by the results of the test AnTuTu, the model 2016 012 scored 44 points, and the updated version was 65 024 points.

The amount of persistent memory the updated A7 has doubled – now file storage available for 16 GB and 32 GB. Part of the storage capacity allocated by the operating system Android 6.0 Marshmallow, which will soon receive an upgrade to Android 7.0 Nougat. Built-in memory can be supplemented by microSD card up to 256 GB for it a separate slot. The autonomy provided by battery capacity of 3600 mAh, replaced the battery at 3300 mAh.

Camera and other features

Positive changes have affected the two cameras. Instead of modules 13 and 5 megapixels, the manufacturer has equipped the device with two 16-megapixel sensor, complemented by a lens with an aperture of f/1.9. The rear camera is equipped with flash, autofocus PDAF and optical stabilization.

Other features of the smartphone remain the same – the model supports NFC technology, the identification of the fingerprint (fingerprint sensor built into the Home button), navigation systems GPS/ GLONASS and modern standards for wireless data transmission – Bluetooth 4.2, Wi-Fi 802.11, Wi-Fi Direct and LTE. The model is equipped with a standard audio Jack of 3.5 mm and two-way USB port.