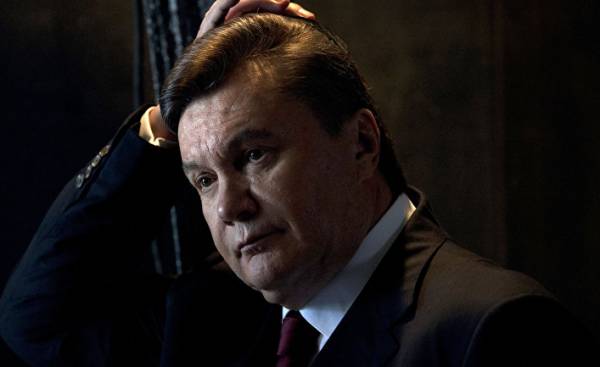 Kiev — the Smell of 2006. Then it was already a political corpse by the name of Viktor Yanukovych unexpectedly and illogical back into Ukrainian politics became a Deputy, the head of the largest parliamentary factions, the Prime Minister — and so, in four years reached the level number 1 in Ukraine — presidential. All first laughed, then wondered.

And now, as it turned out, it is again a political corpse, but still accused of treason, the execution of the Heavenly hundreds and billions of dollars of thefts, the former head of the electoral headquarters of Donald trump by Paul Manafort and his own adviser, offered to give under the control of war-ravaged Donetsk region. This was told by a close member of Manafort Constantine kilimnik in an interview with “Radio Liberty”. The remains of the Luhansk region according to the same plan, it was envisaged to entrust Sergey Levochkin, one of the closest supporters of Yanukovych, but it is not very important. Levochkin, the current Ukrainian politician, people’s Deputy and head of the faction “Opposition bloc” seems to be involved in this situation, so beneficial to shade the figure of the professional political corpse of Viktor Yanukovych. But, still, main — Rostov fugitive, a politician, a repeat offender, the arrest and conviction of which, at least in words, wants the Ukrainian government. Therefore, is it possible to “reincarnation Yanukovych,” No. 2? You is able to believe?

There is such bearded joke. A pregnant woman almost every day in the morning tells her husband that she had a nightmare: that the child was born black and with two heads. All nine months the family lives in the mood. Now it’s time, the husband brought his wife to the hospital in the Morning… uses — and to the midwife.

Morality in this case: people can prepare for anything and everything. You just need to decide on the strategy and to ensure the quality of the execution is scheduled. What this means in view of our history?

With Manafort clear. He had his own interest in the former Ukraine remains in Russia today. It is necessary to neutralize the negative from the possible investigation associated with the “left” in the millions, which he received in accordance with the records in the “barn book” the Party of regions. In addition, it sends a signal that it is too early to scrap it, he is very interested to prove their effectiveness to potential customers. And this efficiency, just like in the above anecdote does not mean the appointment of Yanukovych’s head of the region, which will be formally remain part of Ukraine, but de facto they will steer Moscow, reliably limiting the sovereignty of the Kiev authorities to functional children’s toy. To do so we discussed it a fantastic option with a return of Yanukovych, and not the essence of the plan itself, which is nothing but a fixation of the defeat of Ukraine in the war with Russia and de facto independence of Ukraine consumes. It’s very simple. You don’t like Yanukovych (black with two heads), but as you the same Lyovochkin, Medvedchuk? Well, black, but the head — one!

Let’s discuss the plan of Manafort in fact. It is unacceptable for Ukraine. Yes, the fire no longer and “the economy im. Rinat Akhmetov” nothing will threaten. Somehow local elections will be held. And, if objectively, does not significantly matter whether at that time Ukraine established control over the state border, or not. To win, just a decent result in the elections for the Pro-Ukrainian forces in the Donbas today is impossible. Therefore, the key question of the Donetsk settlement “diplomatic means” is a “special status”, or rather, his hell in terms of powers of the region, for which independent Ukraine has no right to cross. Will it provide — then “two-headed Yanukovych” is not so terrible.