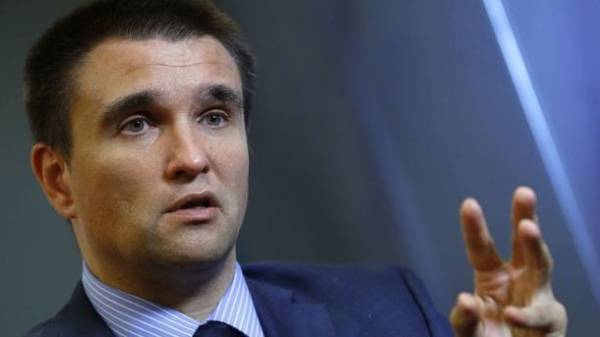 The exact date of the meeting of the President of Ukraine Petro Poroshenko and the President of the United States Donald trump is still being discussed and selected the dates of meetings with other members of the new Administration of U.S. President, Minister of foreign Affairs of Ukraine Pavlo Klimkin in an interview ZN.ua.

“We are now discussing different options. Today I can not say more, so consciously, so to speak, not to keep the intrigue,” said the Minister, answering a question about whether it is possible today to speak about the specific date of the meeting between the Ukrainian and American leaders, in interview to the edition “Mirror of week. Ukraine” (ZN.UA), which was published on Saturday.

The head of the Ukrainian foreign Ministry said that his Agency also selects the date of the meeting with the new Secretary of state USA Rex Tillerson and a few other representatives of the administration trump.

“We now select a date when it would be most likely to meet immediately and Tillerson, and with the newly appointed national security Advisor to the McMaster, and with the new defence Minister Mattis, as there are many aspects that need to be discussed with different members of the new American administration,” – said Klimkin.

We will remind, in January, the Ambassador of Ukraine to the United States Valeriy Chaly said that the first meeting of the President of Ukraine Petro Poroshenko and U.S. President Donald trump may take place in the 20 days of February during the visit of the Ukrainian President to Washington.