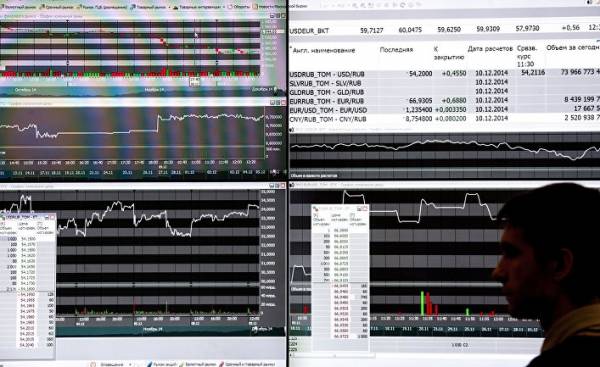 Listed in Moscow shares offer the best in the world dividend yield.

The MICEX index fell and is now lower than global equity markets.

The most generous dividends in the world today are not in demand, and the most significant quarterly rally since 2012 on emerging markets has led to the backwardness of the Russian stock market.

Investors ignoring the yield, which, according to estimates, will amount in the next 12 months 5.3% and dropping quoted on the Moscow stock. This is due to fears about the fact that the United States is not going to weaken the imposed against Russia sanctions as quickly as expected. Dividend income in Russia are the highest among the markets with a market capitalization of not less than $ 100 billion, and they are even higher than income from sovereign bonds. However, Russia is unable to attract funds of investors.

With the expansion of the gap between Russia and other emerging markets, the arguments in favor of the acquisition of Moscow-shares are becoming more convincing. Some investors will be cautious about the rally taking place in the vast from India to South Africa and Mexico, as the assessment becomes more costly, and the volatility was fixed at the levels that preceded the collapse in the past. If these markets zabuksuet, the portfolios with higher dividend income in the case of Russia — could be interesting other options.

“In other markets such yields will require two times more shares, says Ekaterina Iljutcenko (Ekaterina Iliouchenko), investment Bank Manager Union Investment in Frankfurt, under which are the Eastern European assets in the amount of $ 215 million. — Because the associated with trump, the rally ended, sustainable crude oil prices and good corporate results should cause investors to return to the Russian market”.

The index of MICEX decreased in the quarter by 8.8%, while the emerging markets MSCI Index (Morgan Stanley Capital International Emerging Markets Index) gained 12%. This allowed Russia to look cheap. Shares MICEX offer the highest dividends compared to other similar markets since 2008. The expected income from those expressed in the dollar index of RTS in the past 12 months has grown three times faster than the yield on the MSCI rating.

Although estimates on the MICEX are tempting, investors continued to Express concern about two other factors that usually determine their interest in Russian assets. They look at the prospects for oil prices, as well as on the contours of U.S.-Russian relations.

Here are the opinions of some other investors about the attractiveness of Russian dividend income:

Elena Loven (Loven Elena), who helps to manage assets in Russian shares at € 1 billion ($1.1 billion) located in Stockholm Swedbank Robur: “High dividend yield is an argument in favor of Russia. However, dividend yield is not enough for the resumption of the market rally in Russia. This requires additional triggers. In my opinion, the Russian market may go down from current value. Currently the stock market is not as cheap.”

“Many investors are negative about the prospects of oil and optimism about the easing of sanctions quickly evaporated. People get income, but they do not connect big hopes with this market. Does not make sense to buy Russian stocks just for the dividends.”

The risks and volatility

“The Russian stock market has an attractive dividend yield. However, this risk premium and volatility. To rely exclusively on dividends is a bad idea, because if stocks fall 10% to 15% in one week high dividends cannot compensate for losses”.

“If the sanctions are lifted, then the stock will rise in price, and dividends will be reduced by 4%. Despite the high dividend yield in Russia it is possible to quickly lose money in a falling market.”

“High dividend yield is very attractive. It shows that Russian companies generate a large quantity of flows of cash and investment discipline has improved significantly compared to the situation that existed a few years ago.”

“Market growth contribute to many things, including the geopolitical situation and commodity prices. Over time, however, only the cash flows determine the price of companies, and in this respect the dividend is very useful. In addition, Russian investors will get large amount of dividend streams, and much of it is likely to be reinvested”.

“Dividend income is one of the evaluation options under consideration. By itself, it is not overly stimulating. A modest correction this year, of course, made all estimates bole attractive, including dividend income, but we have not changed our strategy in this regard. There is a normalization of the revenue forecast for Russia, and it may be more interesting than the modest dividend growth.”