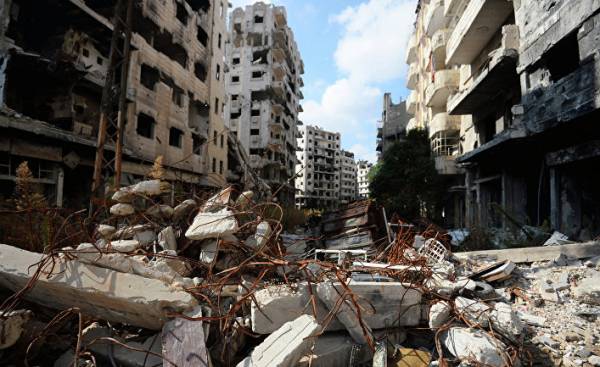 The news of those killed during the civil war in Syria has long come to Russia. Only now it became known that last Thursday in HOMS province killed four Russian military. According to the Ministry of defense in Moscow, their vehicle hit a land mine, the blast four passengers died and two were seriously injured. Thus, from the beginning of the Russian military operation in September 2015, according to official data, in the civil war in Syria killed 27 Russian soldiers.

Moscow newspaper “Kommersant” reports that the victims of the incident was military advisers. They had to deliver to the Syrian army, the plan of the General staff of the Russian armed forces. However, the relatives of one of the victims, artillery officer Vadim Magamadova, told the newspaper that he fell victim to enemy fire.

Circumstances of death not clear

The Moscow research team Conflict Intelligence Team does not exclude that Magamedov and his companions died as a result of artillery battles against terrorists “Islamic state” (LIH) (banned organization in Russia — approx. ed.). The next day after the death of a loved LIH Amaq news Agency released a video about the artillery pieces of the Islamists with which they are shelling firing positions of the Syrian army and forced the soldiers in a panic to flee.

“Kommersant” writes that Magamedov served ostbataillone motorized rifle brigade, stationed in the Kemerovo region. According to Kommersant, as well as by 120th artillery brigade, one of her howitzer artillery battery at the end of 2015 were relocated to the province of HOMS, over which the battles were fought.

Artillery refers to land troops — and the Russian officers from the beginning, assured that Syria is not planned to use ground units. However, in the circumstances of the Russian military commanders increasingly difficult to stick to given word. In the end, to get around their promises, were drawn from the mercenaries and auxiliary troops.

In December it became known that in Syria involved hundreds of fighters of the Chechen national guard. And recently, the President of neighboring Chechnya the Republic of Ingushetia Yunus-Bek Yevkurov announced that Chechens will change the Ingush battalion of the military police.

These measures ostensibly applied to protect the Russian air base “Hamim” and officers of the Russian “reconciliation Centre”. However, according to the Russian Middle East expert Alexander Shumilin, Caucasians are involved in hostilities, especially in Aleppo captured: “They need to ensure that Iranian Shiite militias not staged killings of local inhabitants are Sunnis. About the same time Russia has agreed with Turkey.”

Russia’s allies in Syria, mainly Syrian government troops in the military are considered unreliable. In December of last year, they surrendered militants of ISIS ancient city of Palmyra, who in March was won because of Russian support. The fact that at that time, hundreds of Russian mercenaries, “the Wagner Group” fought on the front lines in Russia is the “secret to the whole world”.

“The Wagner group” — is a private mercenary squad, named at the call of their leader Dmitry Utkin. In Russia officially banned the creation of military formations, but in December at a reception in the Kremlin suddenly appeared Utkin, a former officer of the Russian military intelligence. He was awarded the order of courage.

Some Russian media, citing the Ministry of defense and ex-mercenary, reported that in Syria killed 27 soldiers to 600 from the “group of Wagner.”