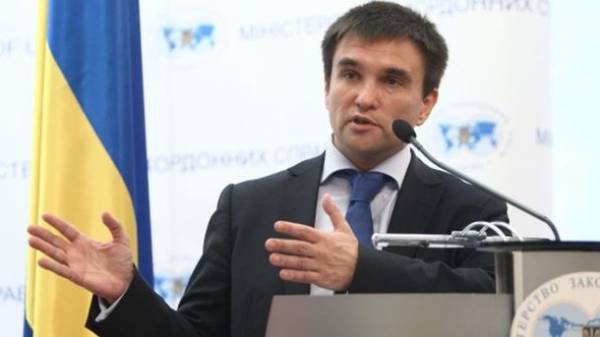 Foreign Minister Pavlo Klimkin urged to reform the UN Security Council to eliminate the abuse of the veto by its permanent members.

About this Klimkin said during a speech at the open debate in the UN security Council at the Ministerial level on “the Observance of international peace and security: conflict in Europe”, transmits radio “Freedom”.

“The Security Council must be able to give an effective response to the bloody conflicts, regardless of the possible presence of the parties to the conflict at the table, as a permanent member of the security Council,” – said Klimkin.

According to him, in the future, it is unacceptable that the paragraph of the UN Charter that “a party to the conflict must refrain from voting” and then “blatantly violated”. Need to establish clear procedures for compliance, said Klimkin.

In his speech, the foreign Minister drew attention to a number of conflicts in Europe that are caused by the actions of “one state” that creates the continent’s many hot spots for technology: to bring the conflict to take part in it, support it, and then to undermine peace efforts instead mediate them.

“If the aggression of the state will not be kept, every “frozen conflict” to become hot, and the aggressor state will create new threats and challenges to stable points,” – said Klimkin.

Also, the Ukrainian Minister stressed that the problem of the UN is that “the architect of this strategy of” sitting at the table, as a permanent member of the UN security Council. “Having a grave responsibility to preserve peace and security, this state – Russia – violates the provisions of the documents developed as the cornerstones of peace is the UN Charter, the Helsinki final act and the Paris Charter,” he said.

Klimkin said that Russia is using the weaknesses of others for the benefit of themselves. And one of these institutional weaknesses, which the abuses of the Russian Federation, is the right of veto in the UN security Council and the rule of consensus in the OSCE. “An effective mechanism to attract the attacker accountable for his violation have not created,” – said the Minister.

We will remind, people’s Deputy Vladimir Aryev reported that after Ukraine has started chairing the UN Security Council, it will be able to convene meetings when necessary. At the same time, Russia has veto power in decisions and could block them.