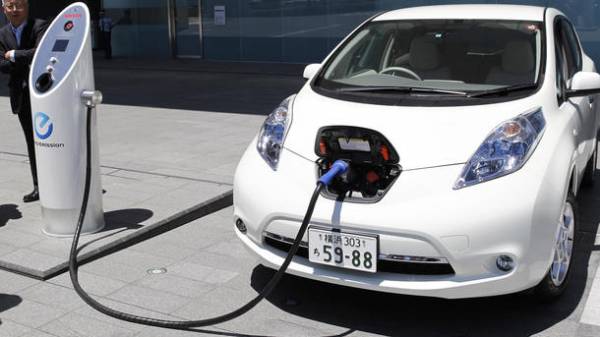 Infrastructure Ministry wants to increase the share of electric cars on the country roads up to 15% in 2020. Electric cars will drop to 21-22% if the Ministry of infrastructure will embody the statements of support for sustainable transport. Manufacturers of domestic machines promise to exempt from income tax and land. The website “Today” found out will drop if in 2017, electric cars, and whether to increase their number in the Ukrainian roads to 15%.

Cancellation of taxes: how much cheaper electric cars

In Ukraine, about 3,000 electric vehicles, but in total sales last year amounted to 0.7%. The government want to achieve a 15% – almost the level of Norway, where the share of electric cars is 16%.

The Ministry of infrastructure offers to 2021 for the release of imported electric cars from: VAT – 16,8%, Pension Fund – 4.8% and excise tax – 109 Euro. In addition, the Ministry want to make a tax rebate to the dealers to the income tax and to reimburse part of the cost of a car buyer. For domestic manufacturers of electric vehicles – to abolish VAT and introduce a reduced rate of tax on land up to 2028, the Pension Fund will cancel only up to 2021. Also plan to cancel duties on import of components for electric vehicles and install a reprieve from paying VAT for six months.

For example, the new Nissan Leaf 2010 production costs 17500 dollars, with the abolition of taxes, the electric car will drop to 13 745 dollars. When the current of 0.71 UAH per kWh of electricity, fully charging the car will cost 17 UAH, this is enough for 160 km. Cost more cheap Smart Fortwo ED 2014 release will decrease from 11702 to $ 9 153. That price will be subtracted another state grant, the amount of which is still unknown. 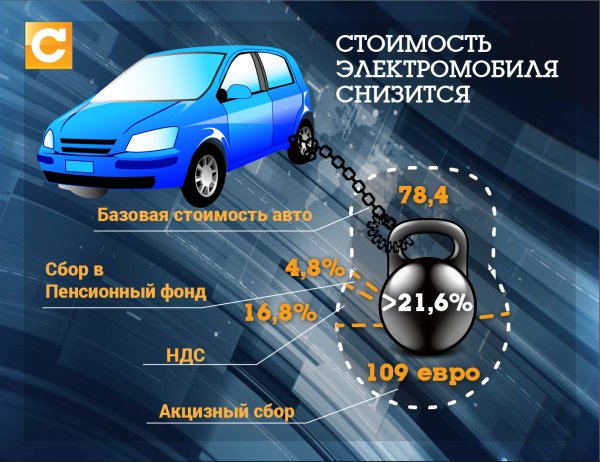 In the words of the Minister of infrastructure Volodymyr Omelyan, preferential conditions for electric cars to attract major automakers: Toyota, Volkswagen, Hyundai, Nissan and others.

The details of how it will be reimbursed to the buyers of the cost of electric cars the Ministry was not disclosed. But, most of all, it embodies, believes Executive Director of the Ukrainian Association of participants of the market of electric vehicles Sergey Bogush.

“It is ideas, they are part of the promotion. We were offered is the abolition of VAT, to give benefits. But in our country, retired people are unable to pay the fine, and tomorrow we will say that these articles have no money. The system of social guarantees, unfortunately, does not work,” he says.

ElectroCars Alexander Kravtsov, the CEO, believes if grants leave, it would be difficult to obtain. “Subsidies for purchase of electric vehicles will have little impact on the development of the market, it is unlikely everyone will be easy to get them,” he predicts.

Also read: gasoline Prices reached 30 UAH/liter in the second half of the year – expert

Infrastructure for electric vehicles: where to charge

For the transition to electric vehicles has all the conditions, experts say. In the country over the last three years have appeared three hundred charging stations near the hotels, cinemas and some of the Parking lots. While 90% of these stations are free, some may charge a fee for the place, including spending on electricity. Developed network of stations allowing you to travel around the country, said CEO ElectroCars Alexander Kravtsov.

“When you consider the number of charging stations on highways and the ability to continue the ride for another 100 miles using the generator, and travel in Ukraine – not the problem. In large cities no longer have any difficulties with charging of the electric vehicle, in the whole country there are about 300, a third of which in the capital”, – says Alexander Kravtsov.

“Charging station – a device that “communicates” with the car. Not just transmits electricity, and the computer station is in contact with the machine. Such stations in Ukraine, about 300 and 100, which actually represent the electrical outlet. We are a year and a half trying to introduce the concept of “charging station” as it is understood in the world,” he says.

When you cancel the taxes

In 2015 in the Verkhovna Rada tried to consider bill No. 1912 of the abolition of VAT and excise duty on electric vehicles. But the project lacked four votes of the deputies felt that snyatie taxes threatens the domestic auto industry. According to experts, the situation has changed, and the deputies this time to support the initiative of the Ministry of infrastructure, especially in the project direct benefits to Ukrainian producers. 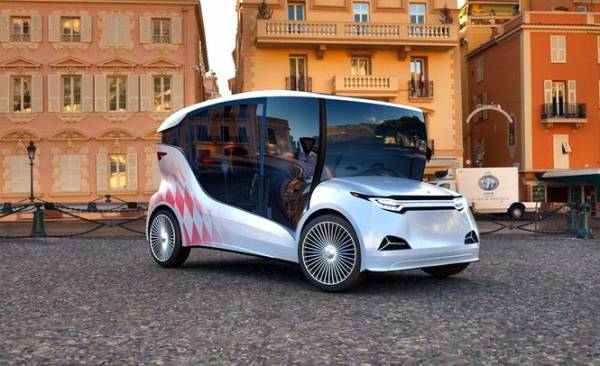 “In 2015, the electric vehicles were a rarity. Now the situation has changed. The bill is modified. We sent letters to each MP and received answers, some 300 parliamentarians support the development of electric vehicles. I do not think that among them there will be resistance,” – says Oleg Nazarenko.

In 2017, electric cars will not become cheaper, because the project and its adoption takes a year, said Alexander Kravtsov. Therefore, cheap electric cars should be expected from 2018.

“It would be surprising if the authorities continue to ignore electric mobility trend in Ukraine. I wish all the items from the plan of omelyana (Minister of infrastructure – approx. ed.) failed to realize in the planned timeframe. But there is one “but”. On average, the laws are accepted throughout the year. If you take the job right now, in the middle of 2018 Ukrainians feel that the state is “For” electric vehicles not only in words,” he says.

The state should not be limited to the adoption of laws, said acting Director of the Ukrainian Association of participants of the market of electric vehicles Sergey Bogush. At the state level should establish a program of converting public transport to electric cars, and building standards to anticipate installation in the underground Parking lots of apartment buildings with charging stations.

“About 90% of urban transport is moving within the city. All vehicles can be transferred to electric, and thereby to reduce harmful emissions and save on fuel. In city budget it is a huge saving – gasoline is 20-30 times more expensive than electricity. The money saved can be spent on the development of other industries. We have to look forward what will happen in five years and what trends will in the world”, – says Sergey Bogush.

Also, the government should consider the arrangement of the charging stations in the underground Parking lots of apartment buildings, experts say.

“In addition to the abolition of taxes should be the strategy for infrastructure, development of algorithm to connect the charging stations in apartment buildings and other bonuses, such as free municipal Parking lots, travel lanes for public transport. It is the additional benefits that would encourage city dwellers to move to the ecological car,” adds Alexander Kravtsov.