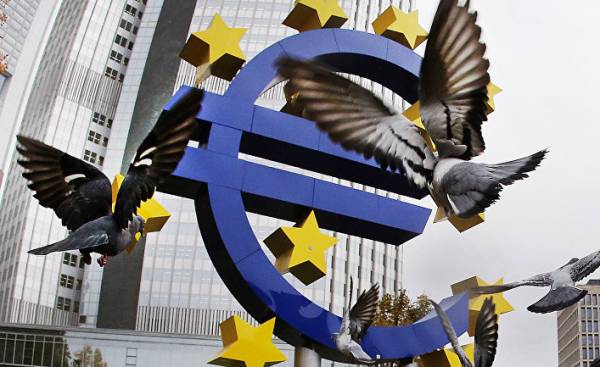 European politicians look at the turbulence in 2017 and estimate the market for bonds of the Eurozone with growing concern. Sale of government bonds, a trend that is now observed worldwide, adds stress to the already vulnerable economy of the unit, especially in southern Europe. The differences in yields between French and German bonds, for example, has reached unprecedented from 2012 levels, when the sovereign debt crisis was almost fatal for the currency Union. Economic risks in the Eurozone are compounded by the political. The recent failures of the unit in an attempt to break the cycle between banks and governments in the Eurozone only increased the threat to her. New ideas to fix this vicious circle can run into stiff resistance in Germany, where elections are scheduled for September. Experts from the us private intelligence analysis company Stratfor said on what countries in the Eurozone unable to leave due to the threats in front of her this year.

Analysts remind that this year’s planned elections in the Netherlands, France and Germany, because of the future of their results have a lot of fears are particularly worried about American spies a chance to win the leader of the French “National front” marine Le Pen, who promised to withdraw France from the Eurozone as quickly as possible. Although the electoral system in France is designed so that the extremist party “national front” can be left out, however all the other presidential candidates have flaws that could prove fatal for their campaigns. Accordingly, the likelihood of her winning there.

In Italy, written by the scouts in his report, fragile government and disunity in the ruling Democratic party increased the likelihood that the election could be this year. In the result, the new government will largely be influenced by “five star Movement” or “Northern League” party, who want Italy left the Eurozone.

If euroscepticism minded forces are able to gain access to power in any country, they don’t necessarily have to win a referendum on leaving the Euro, to damage her. The mere act of scheduling a vote in France or Italy may precipitate a crisis which will shake the whole monetary Union according to the forecast.

Greece is another cause for concern among the leaders of the Eurozone, which is opposed to the program of financial aid to Athens was delayed in implementation due to the expectations of the elections on the European continent. Yet Greece has enough money, say us analysts, but if the financial question is not solved till July, it will have to start negotiations about a totally different program of salvation. This will cause another Greek crisis in 2015, when there was a risk of a Greek exit from the Eurozone.

At the same time, economic risks continue to circulate, particularly around Italy. So, the third-largest economy in the Eurozone has the second largest ratio of debt to gross domestic product (by 132.4%), while the banking sector has grown 276 billion euros of bad loans and on the verge of crisis. In addition to these troubles Italy is the Euro zone, which is very vulnerable because of a vicious circle: Italian institutions are the largest holders of the debt unit of its government, which accounts for slightly less than 12% of the total assets of the banking sector.

Previously, a vicious cycle caused by the Greek crisis, which nearly led to the collapse of the Euro zone, reminiscent of Stratfor. Then the authorities tried unsuccessfully to break the connection on the bonds between banks and their governments. The offer of Germany to limit the amount of debt of their own government, which the banks can hold, hotly contested in Italy and Spain, as its implementation will lead to massive disruptions in their economies.

Now European governments are looking for another way to break the cycle. For example, in January it was proposed to create a European “bad Bank” that would buy loans of EU banks, thus improving the financial health of the sector. Another idea, first announced in October 2011, is gaining momentum in recent years: the creation of European safe bonds. Under this plan, the company will buy bonds of all Eurozone countries and to create two pools: one for more risky economies, and the other for more secure. And, on this basis, they will create two types of bonds. In September the European systemic risk Board, headed by ECB President Mario Draghi (Mario Draghi) has established a task group to study this idea.

Analysts from Stratfor regret that Germany — the most influential voice in the Eurozone — was opposed to both ideas. The German public is strongly opposed to any proposal that might be related to subsidizing debt. Over the past few years, Germany has taken steps to protect themselves from the possible dissolution of the Eurozone. So, German banks stopped lending to companies based in other Eurozone countries, preferring instead to keep their money in Germany is another step in the direction of integration. So any idea that involves the pooling of risks is likely to get the heave-Ho from Germany, especially in an election year.

The Eurozone has entered a difficult year, and some investors are showing more and more doubts in her ability to survive. If Europe is successful the political obstacles that stand in front of her, uncertainty in the market should quickly disappear and return the money on the bond markets, analysts say. But even if this happens, economic risks (which were exacerbated by political factors on the continent) will continue to generate fears for the future of the currency Union.