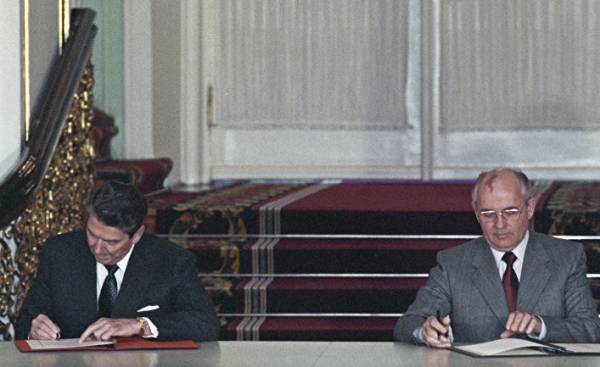 The New York Times reported that the Russians have violated the Treaty on the elimination of intermediate and short range from 1987 secretly placing on its territory of a cruise missile with a range over 500 km. attracts Special attention, however, not only the placement of missiles, but the fact that Washington for two years tried not to notice.

The fact that the New York Times published information from the us administration, in February 2017, is as important as the fact that the Russians have deployed a new missile. This means that Americans have for two years tried on the official level not to notice the danger of a new Russian missile programs, while (at least since 2008) perfectly knew about them.

Reports that the Russian army tests land-based missiles, medium-range, even got into print in 2014 and 2015. The alarm should have beat already, since the test was a serious violation of the restrictions, which was recorded as adopted in the 1987 Treaty on intermediate and short range. However, this did not happen. Apparently, because the noise would be evidence of the ineffectiveness of actions taken by the administration of President Barack Obama.

Its representatives have repeatedly tried to convince the Russians to suspend the program for the development of cruise missiles, ground-based, another phase of testing. In may 2013, the state Department for the first time officially drew the attention of the Russian leadership to the threat of violations of the INF Treaty, and in January 2014, Americans reported their fears NATO allies.

The issue raised by President Obama in an official letter to Vladimir Putin on 30 July 2014. The Kremlin, of course, called the accusations baseless and coming from the “other motives”. However, in 2016, it became clear that the negotiations failed, and in the Russian armed forces were mobile missile launchers with missiles with a range over 2,000 km.

The us military knew this, as evidenced by the statement of the former commander of the United armed forces of NATO in Europe, General Philip Breedlove. In 2016, he publicly warned that the deployment of cruise missiles, ground-based, radically change the military situation, and therefore “should not remain without a response”.

In November 2016 in Geneva, even for the first time in 13 years, convene a special audit Committee, which, according to the INF Treaty, is designed to test how parties fulfill its conditions. Russia again denied the facts of breach of contract, despite the fact that the Russian defense Ministry in 2016 officially announced the acceptance into service of new missile systems (and even released pictures of them).

Meanwhile, the message about placing missiles appeared in the United States only in February 2017. In the United States are trying to further defuse the situation, downplaying the number of rocket launchers, in fact, appeared in the Russian army. Americans believe that the Russians now have two battalions, each containing four launchers of cruise missiles. Each of them can be equipped with six missiles, two of which are ready to run.

One of these battalions reportedly conducting exercises at the Kapustin Yar, and the second in December 2016, was transferred thence to one of the missile crews, located, in all probability, in the Central part of Russia. Questions is also coded designation of new Russian missiles. Americans use the index SSC-X-8, which corresponds to the weapons under test (in this case we use the letter X). Meanwhile it is already known that the new missile entered service appeared in the Russian ground forces.

To speed up and hide the whole process of appearance of weapons in the army, the Russians used the launchers for the ballistic short-range missiles (up to 500 km) “Iskander-M”. Modifications affected only the upper part of their design, which was changed to accommodate two long containers, which contain 3M14 missile system “Calibre”. For such technical solutions have a special name — “Iskander-K”, which is misleading because, in fact, each launcher can use different types of missiles.

The Russians can use different launchers in the same unit, and are already doing this. This allows the missile crews to strike as with cruise and ballistic missiles. In addition every place that hosts a complex “Iskander” should now be considered a firing position “land “Caliber””. So self-propelled launchers of cruise missiles may already be in Crimea, the Kaliningrad region and even in Syria (there was also transferred the complexes “Iskander”), and not only in Central Russia.

As noted by the New York Times, the violation of the INF Treaty, will be a test for President trump and his administration facing a crisis in relations with Russia. The theme resonated on the background of continued formation of the new administration: Trump will have to find a candidate for the vacant following the resignation of Michael Flynn (as Michael Flynn) the post of national security adviser.

If we talk about Europe, the emergence of a new cruise land-based missiles will not be a revolutionary fracture. In Russia in recent years, actively entered into service the marine modification of missiles 3M14 “Calibre” for both surface and submarine vessels. So the Old continent is in the area of the lesion.

The situation is different for the United States. The Americans finally realized that the new missiles pose an indirect danger. Their analysts now officially say that cruise missiles, sea and ground-based will allow “to unload” the strategic nuclear forces of the Russian Federation, so they could focus primarily on targets in the USA, not in Europe and China.

While the press Secretary of the state Department mark Toner (Toner Mark) stated only that “he would not comment on issues related to intelligence.” However, the situation is dangerous as the Russians used the war in Syria, to test the cruise missiles they were launched from the Caspian sea (from surface ships) and from Mediterranean sea (including submarines). So now we are talking about properly functioning and “zeroed” the system.