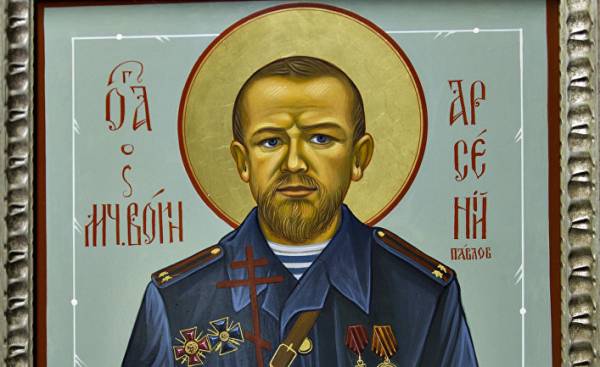 The ranks of the Orthodox army of heaven has been enriched with the Martyr-warrior Arseniy Pavlov, life and death are an example to us all. We put forward the initiative about his canonization. Holy warrior Arseny, pray for us! — calling to one of the most famous fighters of “Russian spring” Arseny Pavlov, Motorola, the radicals of the organization E. N. O. T. Corp, which posted on its website a fiery Manifesto, and an “icon” depicting a new “Saint.”

The icon, created according to the canons of the images of saints, Motorola appears dressed in full uniform of Colonel of the so-called Donetsk people’s Republic. In his right hand he holds a cross and in the left a sword. From under the coat is visible vest, pointing to a link “Holy” with the Russian army.

The Manifesto of E. N. O. T. Corp and portrait of a bloody separatist in late January, went on social networks and popular Russian Newspapers. These publications have revived the legend of Motorola, which gradually began to forget.

Since his death (the bomb exploded in the Elevator when Pavlov returned home) several months passed.

The perpetrators could not be found. The leadership of the DNI said that the attacks are the Ukrainians, however, this version was discarded forensic experts familiar with the specifics of Donbas: nobody could put a bomb in the Elevator carefully guarded house of Motorola. Responsibility for the attack claimed by a group of nationalists from Kharkov called Misanthropic Division (banned in Russia organization — approx. ed). However, in addition to posted to YouTube a spectacular video in which young people in the hood something to cry and confessed to the murder of Motorola, no evidence of their connection with the attack there.

To find those responsible for the death of other people, who are persons of “Russian spring”, also failed. Last week died the first Chapter LNR Valery Bolotov (the official version, from a heart attack, according to unofficial — poisoning); Deputy Minister of labour and social policy DND Sergey Tretyakov (a young man who didn’t look sick, died for unknown reasons); the chief of police LNR Oleg Anashchenko (a bomb planted in his car). A shot from a grenade killed one of the most famous fighters of the commander of the battalion “Somalia” Mikhail Tolstoy, better known by the nickname Givi. It’s a bloody Geneva only the last days. The hands of the murderers was killed and the other commanders of the separatists, in particular, Alexey Mozgovoy, head of the team “Ghost”, or Pavel Dremov, nicknamed “dad” (when he was driving for his own wedding, in his car, a bomb exploded).

“Putin will eliminate inconvenient witnesses,” writes critical to the Kremlin press. Some fighters, in all probability, killed in clashes robbing Donbass and competing groups, the circumstances of the death of the rest remain unknown. In Ukrainian publications, says that the masterminds of violence or even the actual perpetrators are Russian special services. The separatists and Russian media, in turn, accused the Ukrainian secret services that control subversive groups.

Action in front of the camera

The anonymous authors of the Manifesto calling for ranked Motorola the saints, I think his death is a testimony of martyrdom for the true Orthodox faith. However, in the biography of the candidate in the saints there is no evidence of ties with the Church or follow the ten commandments.

Before becoming a “star Donbass”, Arseniy Pavlov worked at the car wash in Rostov-on-don. Behind him was the military experience: he participated in the Chechen campaign. In interviews, he liked to tell a story he saw on the Maidan crowd, which was thrown at the police “Molotov cocktails”, he realized that Ukraine “seized by the Nazis”, and war is coming. Then he got on the train and arrived in the city Yasinovataya Donetsk region. “I came by myself, nobody invited me. Russian here, so I came here, — said Motorola. When I heard that for each of their, they will kill ten Russians, I decided I have nothing to wait for. I was looking for an opportunity to resist fascism”.

This version is not confirmed Igor Girkin (Strelkov), who was involved in the organization of the subdivisions of the “Russian spring” that raised the rebellion in the East of Ukraine. According to him, Motorola participated in the capture of the Crimea in February-March 2014, and then was sent to Kharkov. After the failure of the “Russian spring” in this city, he was in the vicinity of Slavyansk, and then came to Donetsk.

Motorola quickly moved up, he had military experience, he became a company commander and then battalion, to whom he gave the name “Sparta”, drawing it from a computer game. Pavlov knew how to behave in front of cameras and became the hero of many stories, which were distributed to local TV stations and the Internet. He became the media face of the war in the Donbass. Contacts with the media have made him a good business: for the “day” he took journalists $ 500. Available online videos depict not only the battles on the front (people familiar with the subject, saying he did not rush himself in battle and was famous for the fact that he used to cover civilians, and shooting for television was staging, designed to create battle fame), but the scenes in which Motorola mocks the Ukrainian prisoners. In the same interview he confessed to the murder of 15 Ukrainians.

In the comments under the articles about plans to canonize Motorola possible to find such statements: “a Great candidate is a criminal, who came to Ukraine to kill and plunder, seized in Donetsk several apartments. In addition, he is a bigamist (Rostov he is survived by his wife and son, and in Donetsk it is with great noise married Elena, whom he met on the front).” “Motorola will be the patron of those who travel in the Elevator?”

Perhaps the Manifesto of the E. N. O. T. Corp is one of the many “stuffing” the ongoing information war. However, it especially makes you look to the reactions.

Some took the call at face value and began to collect testimonies of miracles that were doing the candidate for the Holy order to strengthen their bid for canonization. Network circling the story about how ally Motorola went to St. Petersburg to present the functioning of the informal Museum of new Russia the cap of the dead commander. The car, which drove a “relic” collided with a truck, but the driver, as he says, “miracle,” survived, all thanks to the amazing power of the popes.

The Russian Orthodox Church did not comment about the canonization of Motorola. In the Manifesto sounds like a criticism of the Church hierarchy who do not respond to Donbass events properly and betray believers into the path of ecumenism. The authors emphasize that the official Church they disagree.

Meanwhile, in the Orthodox Church, there are groups of supporters of different causes of ambiguous figures like Grigori Rasputin or Ivan the terrible. Supporters of the ascension on the altar of Motorola could seamlessly fit in with this motley picture. To canonize “all those who fought for the new Russia” called already in January 2015 the writer Alexander Prokhanov, the singer of “the Russian world” and the concept of civilizational community of peoples under the patronage of Russia. So the idea is not new.

The fact that the initiative of canonization of Motorola made the organization ENOT Corp, does not cause surprise. This group is known by different actions from the organization aid for Donbass separatists to participate in other conflicts, training of volunteers and funding armed groups. The head of the organization women Milenkevich (“Water”), ex — military, activist organizations of veterans associated with the radical national-Patriotic movement, which actively appeals to Orthodox values.

Play around Donbass is entering a new phase. The “waste” pieces of the commanders of the “Russian spring” at this stage, are unlikely to render some service of her political masterminds and patrons. Canonicalization will not.