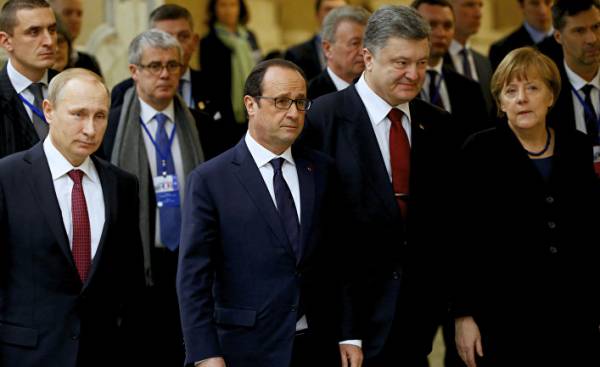 The President of Ukraine Petro Poroshenko, his Russian counterpart Vladimir Putin and the leaders of the West continue to hide the true nature of the three-year military aggression of Russia against Ukraine, calling it anti-terrorist operation, not war.

From terrorist acts in the world killed far less people than the war in the Donbass. Thirty years of conflict in Northern Ireland killed 3 thousand soldiers, police, terrorists and civilians. In three years of war in Ukraine, the UN estimates that I believe are undervalued, killed 10 thousand civilians, and about 10-15 thousand combatants: the Ukrainian soldiers and volunteers of Russian soldiers and separatists. The war, which killed about 30 thousand of soldiers and civilians (German intelligence indicates a figure of 50 thousand), it is simply immoral to call ATO.

However, the President Poroshenko has, at least, three reasons to give the war for the “ATO”.

First, it allows him and his oligarchic allies to continue to earn on the illicit trade in so-called DPR, LPR and the occupied Crimea. Calling war anti-terrorist operation, the President Poroshenko and Prime Minister Vladimir Groisman justify their unwillingness to carry out reforms, allowing them to continue their own corrupt practices. The latest report from Vox Ukraine has shown a complete lack of progress in any reform during the past month, while the recently published corruption perception Transparency International, Ukraine ranked fifth from last among the 15 former republics of the Soviet Union. Or maybe something more absurd than the fact that all five members of the Eurasian economic Union have a low level of corruption than the signatory of an Association Agreement with the EU, Ukraine?

Second, “the state of anti-terrorist operation” allows the President to avoid the need to develop military strategy and plans to return control of the Crimea and occupied territories of Donbass.

Thirdly, it gives the SBU control over the fighting of Ukraine is corrupt and nedokomplekta institution. It is important that Poroshenko controls the SBU. Britain with a population 20 million bigger than in Ukraine, has 6 thousand employees of the intelligence services, while Ukraine — 34 thousand.

Westerners, in turn, it is convenient to use the term “ATO”, but not the war, because it allows them to step back from the conflict and do nothing to resolve it. According to their official position that the West cannot provide Ukraine with defensive armament and with the expected implementation of the Minsk agreements. In doing so, the Western countries ignore their own obligations under the Budapest Memorandum of 1994 and the Charter on a distinctive partnership between Ukraine and NATO of 1997 — two documents that provide support for the security and territorial integrity of Ukraine.

The reluctance of the US and Britain to help Ukraine according to the Budapest Memorandum gives Ukraine the moral right to seek alternative ways to ensure its own security, including through membership in NATO. Poroshenko could hold a referendum on joining NATO at any time during the three years of his presidency.

Putin this terminology gives an opportunity to get everything at once, being both the aggressor and peacemaker. The Minsk agreement and the substitution of war “ATO” turn a blind eye to Russian occupation of Crimea and allow Russia to avoid legal responsibility for the occupation of the territories of Donbass.

After the signing of the Minsk-1, Putin gave complete control of Russia for economic, financial and security aspects of the functioning of the DNI, LC, grossly violating the document they signed. He turned the “Republic” in pseudocereal, 70-90% dependent on Russian financing, Russian creating a shadow government only four months after the signing of the first Minsk agreement in September 2014. Two months after Minsk-1 Russia made the ruble the official currency of the DNI, LC. During the time between Minsk-1 and Minsk-2 Putin also established a 40-strong army under the leadership of the Russian officers, which is more than the army half of the 28 countries-members of NATO.

The reluctance Poroshenko called the conflict in the Donbas, a Russian-Ukrainian war, and to consolidate the territories of the DNI, LC status occupied by Russia entails two negative consequences.

First, it demonstrates once again that politicians are insincere with their own citizens and don’t respect them. According to survey results, the vast majority of Ukrainians (80%) believes that their country is at war with Russia. As most know that on the territory of Ukraine are Russian occupying forces. Three-quarters of Ukrainians have a negative attitude to Putin, the Duma and the Russian government, and consider Russia as “aggressor state”.

The second negative consequence is that the substitution of the war on the ATO gives a false sense of detachment from the terrible conflict that takes place in the plant and along the line of contact in Donbas. Walking on Kiev, it is impossible to realize that the war in the country.

Continuing to call the war “ATO” Ukrainian leaders look weak and hypocritical in the eyes of international organizations. MP from the faction “Batkivschyna”, the Chairman of the Verkhovna Rada Committee on state building and local self-government Sergey Vlasenko reported that during the last session of the parliamentary Assembly of the Council of Europe said to him, “why are we in PACE have to vote for what is war? If your legislation is the anti-terrorist operation. It is not known against whom you are fighting there?”

The PACE and the international criminal court referred to the conflict that is happening in the Donbass war. The decision of the ISS taken in November 2016, said: “the Situation in the Crimea and Sevastopol, equivalent to the international armed conflict between Ukraine and the Russian Federation”. ISS described the situation of Crimea as Russian occupation and came to the conclusion that the detention of Ukraine’s Russian military “refers to direct confrontation between Russian armed forces and Ukrainian government, evidence of the existence of an international armed conflict”.

In Washington, the Congressman asked a similar question of Yulia Tymoshenko during her recent visit there: “You’re talking about war, that war destroys Ukraine? Show at least one document, where this war would be called the war, which actually declared the occupied territory, on which there is an external aggressor?”

It is therefore necessary to carry out four steps.

First, the President should have the courage to describe the DNI, LC, as did the PACE last year as a “hybrid annexation”, together with “illegal annexation of Crimea is unacceptable from the point of view of international law”.

After three years of Russian aggression, Ukrainian President time to declare that these territories and the Crimea are under temporary Russian occupation”. Calling them is occupied by Russia, Ukraine will send a clear signal to the outside world: Putin lies about the “civil war” and the absence of Russian troops on Ukrainian soil.

Secondly, it is necessary to call the conflict a war, not “ATO”, and enter the military situation in the conflict zone. This will take control of the fighting from the hands of the SBU.

Third, in light of the available facts and evidence to the President Poroshenko has to declare that he had no confidence in the fact that the Russian President will once interested in the implementation of the Minsk agreements. Western experts, in particular former employee of US state Department David Kramer, have long noted that the Minsk process should be to admit failure.

In the end, it is necessary finally to act according to conscience and to cease all trade with the Crimea and the DNI, LC, since Ukraine has no right to trade with the invaders of her land.

The President has a choice.

The first is to finally tell the truth about the Russian-Ukrainian war and implement the four steps. Second — to hold early presidential elections, allowing another leader to show courage inherent in soldiers and volunteers on the front lines.

It’s time to declare publicly inside and outside of Ukraine that Russia is fighting with Ukraine.