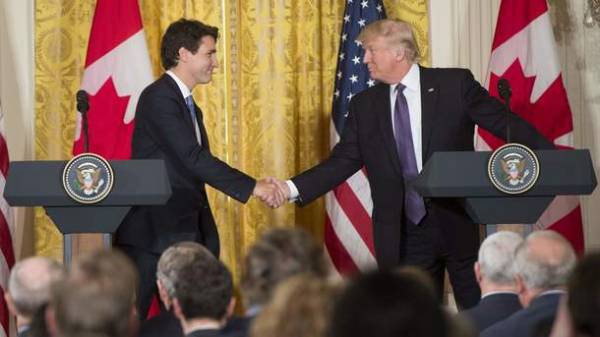 President Donald trump and the Prime Minister of Canada Justin Trudeau held his first meeting on Monday, after which they vowed to strengthen cooperation between the two countries, writes the BBC Russian service.

At a joint press conference held in a very peaceful manner, they have repeatedly stressed that the two countries have common interests and goals.

Trump promised to continue to cooperate with Canada in achieving these goals. Trudeau spoke about the special relations that bind both countries and a deep mutual respect that exists between them. He mentioned that relations between neighbours are sometimes quite complex.

At the meeting, the two leaders took a Central place in issues of trade and economic relations.

In the responses to the questions were shown and the differences between political views of both. Trump defended his policy, aimed at limiting unwanted migration, stating once again that will not be allowed into the country the “wrong” people.

The canadian leader said that he had spent with his American counterpart a fruitful discussion on the topic of immigration.

However, according to him, Canada will continue to pursue a policy of openness towards refugees in compliance with all the measures that guarantee its own security.

Trudeau later said that there was a time when the two countries took different positions in the approaches to different issues. However, according to him, Canadians would not understand him if he was lecturing the President of a large country on how he should act and deal with internal problems in their country.

Upon arrival at the White house, Trudeau gave Donald Trump a personal gift – a photograph of a young trump with his father, former Prime Minister of Canada Pierre Trudeau.

Trump said that he knew and respected Pierre Trudeau and will now keep this photograph in the place of honor.

This was followed by a roundtable discussion with the participation of women entrepreneurs from the US and Canada.

Trump and Trudeau announced the creation of a special Commission that will deal with the question of strengthening the role of women in the labour markets. Trump stressed the importance for women to feel fully as workers and benefits the economy. Trudeau emphasized that women still have to overcome many obstacles to professional growth.

Daughter trump Ivanka attended this meeting and helped in the selection of its participants and defining the themes of the meeting. According to correspondents, it was another confirmation of its growing influence in the White house.

Trudeau, who is 45 years old, and trump, who’s 70, are often diametrically opposite views on various issues.

Trudeau is a liberal in the American sense of the word, defending the principles of free trade and open policies of immigration.

In Canada it took about 40 thousand Syrian refugees. Trudeau calls himself a feminist, and his Cabinet is half women. In contrast, trump intends to drastically reduce the influx of immigrants to the United States from conflict zones, takes a protectionist position in international trade and his Cabinet almost is composed of women.

Relations with the United States has been a priority for Canada because of its southern neighbour accounts for over 75% of canadian exports, and 18% of American exports go to Canada. Many Canadians fear that trump’s intention to seek a review of the Agreement on free trade in North America (NAFTA) can lead to damage to Canada and Mexico.

The personal contact established by the two leaders can ease these fears. Trump obviously had to do with Trudeau otherwise than with the President of Mexico and Prime Minister of Australia.

According to one of the canadian diplomats, the Trudeau administration has proposed to create a joint Commission on women, as the Prime Minister considers this issue important in his political and economic program.