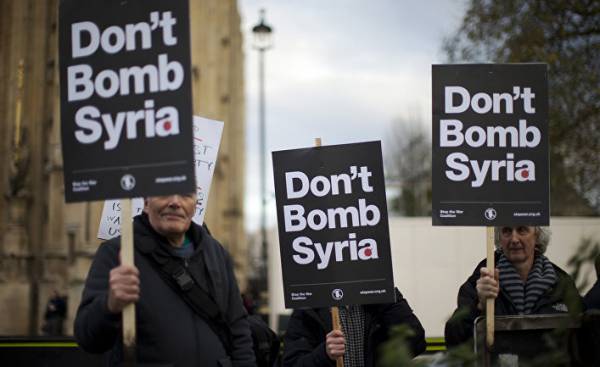 It was the first direct American attack on the forces of Bashar al-Assad. When the missiles “Tomahawk” tonight destroyed the base Shirt, killing at least six government soldiers. It was the turn of the Syrian regime a taste of your own medicine. After the operation for six years, possessed undisputed supremacy in the skies, I suddenly found that it too vulnerable to air attack.

But the Syrian regime knows what it means for aircraft and helicopters, without their air force, he failed again to take control of Aleppo and, most likely, he wouldn’t be able to keep the rebels to the Syrian capital, Damascus.

This means that the night attack is a serious challenge to President Bashar al-Assad and his people and to his allies in the region, primarily in Iran.

The fact that the attack on Syria concerns not only the ongoing war, but the Middle East as a whole. In the Sunni capitals such as Riyadh and Istanbul, as well as in Israel over the role of Iran are watching with fear and discontent.

Victory trump and his sharp attacks on the nuclear agreement concluded by his predecessor, has caused great concern in Tehran. Now that trump has launched a military operation against the most important ally of the Iranians, they had even more reason for concern.

Iran has invested in the Assad regime large sums. It is a matter of prestige. Night attack is thus an attack on the key interests of the Iranians. First and foremost, this may have consequences for the neighboring countries of Iraq, where Iran has yet to match the interests of the United States to deal with ISIS (a terrorist organization banned in Russia — approx. ed.)

The decision of Donald trump, is a consequence of the gas attack that took place on Tuesday, but maybe not just her. It is closely related to American foreign policy and the fact that many military and foreign policy circles was unhappy with Barack Obama. He identified the red line for the use of weapons of mass destruction in Syria. But when hundreds of Syrians died in a gas attack in 2013, Obama has not taken any steps.

It was a blow to the prestige and interests of the United States in the middle East and found the hole she tried to fill in Russia. Everything happens at the same time as trump is trying to form its own middle East policy in which he seems to be interested in closer alliances with the Sunni Arab world and in pursuit of resolving the conflict between Israelis and Palestinians.

In addition, the attack also fits into a longer American tradition.

In particular, President bill Clinton made several separate rocket attacks in the 1990s, and Sudan, and Afghanistan. In practical terms, this had little effect, but was the signal for the world and public opinion within their own country.

And now the question — for both the United States and the Middle East: will occurred a single attack in the tradition of Clinton, or the Americans will continue to attack Assad’s forces and attempt to overthrow the regime. Yet all it seems that trump the pleasure of only one night attack. But what would happen if civilians would be killed again, even by conventional weapons? Will the trump to withstand the pressure of its allies, should continue? As you know, the war is easier to start than to finish.

And in this case it would be not only about the new rules of the game for continuing six years of civil war, but about a whole new war, that can start a war which will have large consequences for the entire Middle East.

In addition, the trump can not answer the call, which was still standing in front of Obama, namely: what are the forces among the rebels, the Americans want to support.

During the war, the movement of the opposition became more radical groups associated with al-Qaeda (a terrorist organization banned in Russia — approx.ed.) become much stronger militarily. In addition, ISIL controls more territory in the East of the country.

This is just one of many dilemmas to determine which should Trump the whole world.