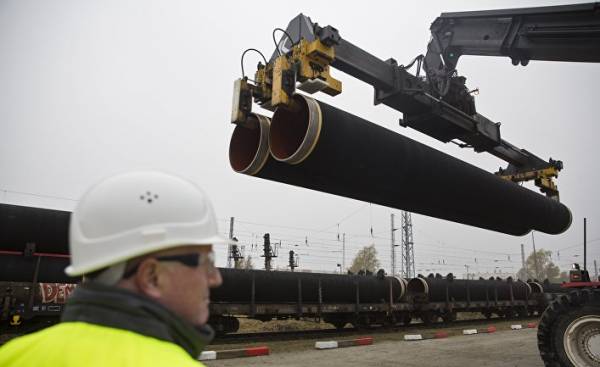 Russian President Vladimir Putin remains optimistic: the expansion of the gas pipeline under the Baltic sea has all the “chances of success”, he said at a meeting with the head of the oil company Royal Dutch Shell Ben van Bearden (Ben van Beurden). The head of the Kremlin stressed that it is a “purely commercial project,” which aims to cover the growing demand in Europe for energy. Putin estimates future energy consumption by up to 510 billion cubic meters per year. “It seems to me. we must engage in dialogue with our partners in a friendly atmosphere”, — Putin said, thinking that I had found a recipe for success for the project.

Van Durden Putin does not have long to persuade. Shell, along with companies OMV, Engie, Uniper and Wintershall is a contender for a partnership with Gazprom in the construction of the gas pipeline “Nord stream — 2”, which should become operational in 2019 and is designed for a capacity of 55 billion cubic meters of gas per year.

Four European gas supplier has recently assured Gazprom in the provision of 4,75 billion EUR (corresponding to half of planned construction costs) in the form of long-term loans, which later can potentially be converted into shares. However, this Treaty threatens the legislative initiative of the Senate: senators want to ban larger investment in the Russian pipeline.

In Berlin and Vienna are already irritated. In a joint statement, Austrian Chancellor Christian Kern (Christian Kern) and foreign Minister of Germany, Sigmar Gabriel (Sigmar Gabriel) has banned such interventions from overseas. In this case, it is likely that to exclude competition from us liquefied gas, criticized both the social-Democrat. German Chancellor Angela Merkel joined the criticism of his Minister of foreign Affairs.

Van beurden confirmed at a meeting with Putin despite threatening sanctions an interest in expanding the Baltic pipeline, which will “ensure Europe’s energy security”. The representative of OMV said that “it is too early to judge risk”, while the law has not yet entered into force.

Operator “Nord stream — 2” is insured against the possible departure of the Europeans: according to Russian media, he has consulted on the possible entry of Chinese banks as lenders to the project. Messages relied on both business and government circles.

“Nord stream — 2″ offers a good rendita and small risk. Chinese banks could be interested in this”, — commented the Deputy Director of the national energy security Fund Alexei Grivach these messages. Also the Director of the Moscow Institute of modern economy Nikita Isaev believes in the support from the East. The interest of the Chinese to the “Nord stream — 2” sincere for political reasons. “At present, China is trying to fight against the United States to build the axis Beijing-Berlin and to engage Moscow.” he said.

Sergey rozhenko, Manager energy consultancy Arup, is more skeptical: “From a commercial point of view, for China, it makes no sense”. he said in an interview with the newspaper Handelsblatt. The orders for the construction of the Chinese can not count. “They are not experts in the field of manufacture of pipes”, — said rozhenko. In addition, Beijing is thereby created would be the competition itself: with a new pipeline to the West, Russia will have more space for price negotiations with China.

The dispute about the “Nord stream — 2” and without that is not a purely European-American show of force. This conflict occurs also within the EU. While Germany is gaining strength in Eastern Europe, there is resistance, especially in Poland and in the Baltic States. But also Scandinavia against. The EU Commission also skeptical in relation to the planned construction of a new pipeline under the Baltic sea.