Profil: After the inauguration of the new US President Donald trump will soon end if the ice age in relations between Russia and the United States?

Sergey Lavrov: of Course, we followed closely the fact that Mr. trump talked about Russia during the election campaign and after winning the election. Its stated position on the necessity of establishing a normal dialogue between our countries inspires some hope for positive developments in bilateral relations.

As repeatedly emphasized by President Vladimir Putin, we are ready to go part of the way to improve relations with the United States. Their deterioration in recent years has occurred not through our fault, as a result of a deliberate policy of the previous administration in Washington. We have always been open in order to develop a predictable partnership based on the principles of equality, mutual respect and consideration of each other’s interests.

— Trump called for improved relations with Russia and even called NATO an outdated organization.

— We understand that to overcome the severe damage caused to the relations under Barack Obama, will require serious effort on both sides. While probably too early to talk about how we’ll work with the Republican team on specific issues. Have to wait for the staff of the new administration will define its foreign policy priorities. We are confident that with mutual interest of Russia and the United States, of course, are not only able to move forward in addressing bilateral issues, but also to make a joint contribution to effective mitigation of the key problems of our time. Especially needed coordination of our countries in the fight against international terrorism. In addition, we have a big unused potential in mutually beneficial cooperation in trade, investment, innovation and technological spheres. It is noteworthy that, despite the sanctions and pressure from the Obama administration, most us companies in recent years, did not want to leave the promising Russian market. It is for them has been and remains very profitable. We are also interested in expansion of cultural-humanitarian exchanges. I repeat: to establish effective cooperation between Russia and the United States possible — but only on the basis of mutual respect and consideration of interests.

— Russia’s military intervention in Syria strengthened the position of the head of the Syrian state of Bashar al-Assad. However, organized by Russia, Turkey and Iran meet to resolve the Syrian conflict in the capital of Kazakhstan Astana was not efficient.

— We are satisfied with how there has passed the international meeting on Syria in Astana on 23-24 January this year. We see it as important, qualitatively new step in the efforts towards a settlement. At the negotiating table together for the first time were representatives of the Syrian government and the armed opposition, which until now was not involved in contacts with the government and more generally in processes related to negotiations on the future of Syria. Although their approaches to the Syrian side has not changed, they reaffirmed their willingness to dialogue, first under the indirect, and then we hope and direct contacts. The meeting resulted in a statement on behalf of the three guarantors — Russia, Turkey and Iran that reaffirms commitment to the sovereignty, independence, unity and territorial integrity of the Syrian Arab Republic as a multi-religious, multi-ethnic, without any division of religion, democratic state. Of particular importance is the paper’s recognition that the Syrian conflict cannot be resolved militarily and that its solution is possible only through a political process based on comprehensive implementation of the resolution 2254 of the UN Security Council. It is fundamentally important that the document declares the determination of Russia, Iran and Turkey to continue joint struggle against ISIS and “Dzhabhat EN-Nusra”, now calling itself “Jabhat Fatah al-sham” (both organizations are banned in Russia — approx. transl.), as well as to facilitate the separation from them of armed opposition groups. Astana has been able to strengthen the cessation of hostilities in Syria in accordance with the agreement dated 29 December. Established a tripartite mechanism to monitor compliance with this regime and investigate violations. On the eve of the meeting was to sign the agreement with representatives of Russia and Jordan, as guarantors of the truce between the factions of the “southern front”.

— Is there still a point in continuing the Geneva peace process on Syria under UN auspices?

— We do not intend to replace the Geneva Astana. We support the resumption of intra-Syrian talks under the auspices of the special representative of the UN Secretary General to Syria Staffan de Mistura (Staffan de Mistura). We continue to believe that their format needs to be extensive and inclusive, as provided in resolution 2254 of the UN security Council. We are taking specific steps to assist the Geneva process which received additional impetus in Astana.

— What do You expect from the Austrian presidency in the OSCE?

— Russia is interested in active and constructive chairmanship of the Austrian delegation to the OSCE. We expect that our Austrian partners will show an objective and impartial approach to the development and implementation of the Organization’s agenda with the interests of all States parties. This is what was discussed during our talks in Moscow on 18 January this year with my colleague, Federal Minister for Europe, integration and foreign Affairs of Austria Sebastian Kurtz, with whom we discussed our cooperation in the OSCE. We note with appreciation that the proposed Vienna program in 2017, which we have carefully studied, is tight and pragmatic and, importantly, pays equal attention to all dimensions of security. The main task for the coming year — restoration of the OSCE confidence and opportunities for equal dialogue and collective decision-making in the field of security. We are convinced that the Organization should continue to act as a major platform for discussion of approaches to all key issues on the European agenda. We understand that this position is shared by our Austrian colleagues. Among the priorities of the OSCE should remain the fight against terrorism, drug trafficking and cyber threats. No less important are important at this stage as protection of traditional values, the harmonisation of integration processes.

— What contribution can the OSCE in the settlement of the conflict in Ukraine? Russia rejected the introduction of the armed police of the OSCE mission in Eastern Ukraine.

We hope that during the Austrian presidency, the Organization will pay due attention to resolve conflicts in your space. First of all it concerns assisting in the settlement of the internal Ukrainian crisis. The fullest possible involvement of the OSCE for these purposes, especially in demand today. In this regard, I would like to note the effective work of the special Representative of the Chairman-Austrian diplomat Martin Sajdik in the Contact group, where the dialogue of the conflicting parties — Kiev, Donetsk and Lugansk — are addressed and must be addressed practical issues of settlement. The important stabilizing role played by the Special monitoring mission of the OSCE. We believe that the OSCE will continue to contribute actively to the negotiation process on the conflict settlement within Transnistria and Nagorno-Karabakh, which is especially important against the background of aggravation of the situation in the region last year. We hope to continue in a constructive spirit of Geneva discussions on Transcaucasia. Will provide Austrian colleagues support in successful implementation of these important tasks.

— Whether to lift the sanctions of the West against Russia along with Russian counter-measures? Sebastian Kurz suggested step-by-step cancellation. Is Russia ready for such a step?

— We did not initiate sanctions. Therefore, their cancellation does not depend on us.

— Do you think that we should continue to remain under European sanctions, but to cancel our countermeasures?

— No, I didn’t say that. We are talking about step-by-step the abolition of all sanctions.

We introduced these countermeasures, for one simple reason. European sanctions do not help our banks to get loans to Finance our agriculture. This means that the agricultural products from the European Union could use in the Russian market an unfair competitive advantage. We had to call it. 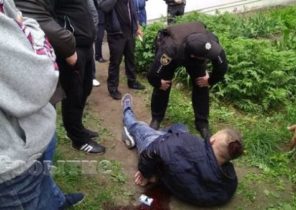