In Poland profit of the first 3.5 thousand us troops within a 9-month mission, which began on 8 January. For an armoured brigade of the US is the duration of the mission in Eastern Europe is unprecedented. Battle group, 3rd armoured brigade from the 4th infantry division moved in żagań and Pomorskie, and 87 tanks M-1 Abrams followed them on the train.

This was the beginning of the rotation reinforced the military contingent of NATO, whose task is to confrontation with Russia. This in addition to the tanks of the armored brigade carries with him 18 self-propelled howitzer “paladin” a few hundred cars Humwee and 144 armored infantry fighting vehicles “Bradley”, which will be distributed throughout Eastern Europe.

Since the cold war in Europe was not the us military forces of this magnitude.

However, when the U.S. military will be żagań, they will fall into the coverage area of Russian attack land-based missiles deployed in Kaliningrad — an enclave located between Poland, Lithuania and the Baltic sea. Over the past few years, Russia has invested heavily in building its military capacity in the area.

In the event of a military conflict in the Baltic States the Russian missiles can be fired at NATO troops moving from Poland. This may slow down the speed of reinforcements, if Russia wants to invade with Latvia, Lithuania or Estonia.

The Baltic States will desperately need these reinforcements to have a chance — even if it is very little to stop the advance of the much more numerous Russian army. Today the Russian army has become smaller in comparison with what it was before, but her strength will be enough to “break any defense, which it can oppose the army of the Baltic States”, as stated in the study conducted by the RAND Corporation in 2016.

Deployed in Kaliningrad missiles represent a serious obstacle for NATO.

For illustration, we present here an interactive map, on which are marked the missile “bubbles” showing the range of impact of different types of weapons in Europe. This map was prepared by the experts of the Center for strategic and international studies in Washington.

On this map you can see the range of strikes Russian weapons to destroy ground targets, air defense systems and weapons, sea-based, located at the Russian border. This map should not be considered exhaustive, moreover, the point of location of sea shells on it fixed, although in the case of real conflict, their location may vary. As for NATO, you can watch the range of naval guns of the Alliance to destroy ground targets, and missile defense facilities, and the location of key ports of debarkation, where the Alliance can bring reinforcements by sea or by air.

Although this information is not new, in this visual version, it causes some anxiety. Russian ballistic missiles “Iskander-M”, equipped with high-explosive warhead, can fly several hundred kilometres into the territory of Poland. Of course, the Baltic States fall completely in their range.

NATO base in Żagań is located on the edge of the range of the missiles “Iskander-M”.

In 2015 and 2016, the Russian military ships repeatedly launched their cruise missiles SS-N-30 “Caliber” from the Caspian sea to Syria, that is, the missiles crossed the distance of not less than a thousand miles. If the issue of missiles “Caliber”, is very similar to American cruise missiles “Tomahawk”, from the Black sea, they can easily reach most European countries.

The Russian Navy is greatly weakened since the collapse of the Soviet Union, and now he is best suited for coastal defense and power projection in the region, but for these tasks the Kremlin does not need a large fleet. In the Caspian sea, Russia has had a small missile ships of the class “brawler” from which to launch missiles “Caliber” and which also is armed with its Baltic fleet.

The Western border of Russia is framed by the objects ABOUT. The radius of anti-aircraft missile systems s-300 and s-400 covers half the territory of Poland and covers the whole territory of the Baltic States — that is, in the event of a conflict, NATO will need to neutralize these systems, then the aircraft of the Alliance are to ensure the protection of Lithuania, Latvia and Estonia.

Meanwhile, on this map are also visible vulnerabilities of Russia.

NATO warships with Tomahawk missiles can easily attack the major cities of Russia — including the capital — while at a very great distance from them.

In short, the military conflict between Russia and NATO will be chaotic, violent and terrible. 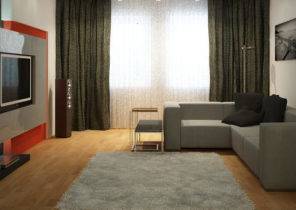 How many years will have to save up for a apartment in Kiev, Moscow, Minsk and Warsaw