Adopted state building codes “Thermal insulation of buildings” will help the country to save annually about 1 billion hryvnia per year, which will enable the population to reduce heating bills by 15%. This was told during the presentation of the new building regulations, the Deputy Minister of regional development, construction and housing and communal services Leo Partskhaladze, the press service of the Cabinet.

According to him, after five years a saving of energy of Ukraine could rise to 5 billion hryvnia.

According to him, the main thing that laid the basis for a new state building codes – a comprehensive assessment of the buildings, normalized costs of energy not only for heating, and energy consumption – heating, cooling, ventilation and hot water.

He also noted that in the year the country can save about 150 million cubic meters of gas.

“With a new norm we will be able to save annually about 150 million cubic meters of gas. For new buildings the energy savings will increase by 30%, and in the reconstruction of buildings, built according to Soviet standards – in 2,5-3 times”, – said the Deputy Minister.

Earlier, Prime Minister Vladimir Groisman said that he wants three times to reduce gas consumption for heating in homes. “Our strategy is: to consume less longer produce. If we are going to produce our own gas, we don’t have it for hard currency to buy abroad.” 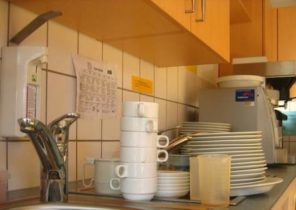 Study: sponge for washing dishes teeming with billions of bacteria