The granting Ukraine visa-free regime inhibit as bureaucratic factors and domestic in some countries-EU members. But despite this, the procedure of visa liberalization has already begun. To date, the most likely scenario would be its successful completion in 2017. This “Segodnya” said political analyst Volodymyr Fesenko. However, the expert said, this process can intervene and other unexpected factors intervened in the process of ratification of the Association Agreement between Ukraine and the EU referendum in the Netherlands, where residents voted against it.

Last year Ukraine and the EU have initiated the process of liberalization of the visa regime. In order to complete it, the document needs to pass a vote in the European Parliament, after which a final decision will be made by the Council of Europe. Relatively speaking, half of this procedure, Ukraine has already passed, but the delay was at the stage of negotiation of a mechanism for temporary suspension of visa-free regime, says Fesenko. The expert notes that the decision on visa liberalization was tied to this mechanism, although it applies to all countries, not just Ukraine. At the end of last year, this problem was solved, but now all procedures must be completed.

On the one hand, the process slowed Brexit, referendum in the Netherlands on the ratification of the Association Agreement between Ukraine and the EU

However, this is only the bureaucratic factors that slowed the Ukraine bizwise. But there was still political in some EU countries. So, on the one hand, the process slowed Brexit – we will remind, in the summer of 2016, the people of the UK voted in a referendum for the country’s withdrawal from the EU. On the other Advisory referendum in the Netherlands on the ratification of the Association Agreement between Ukraine and the EU. Then the Dutch voted against ratification. In December 2016 at the request of the Netherlands at the European Union summit adopted a decision on the Association Agreement between Ukraine and the EU. It stipulates that the SA does not grant Ukraine the status of a candidate country for EU membership and does not oblige the Union to grant this status to Ukraine in the future, does not contain obligations of the allocation of Ukraine of direct financial and military aid and does not provide a right of Ukrainian citizens to freedom of residence and free choice of employment in member countries of the EU. Although SA and bezviz for Ukraine is not associated, the referendum in the Netherlands, the liberalization process slowed down, said Fesenko.

“The Association agreement is not directly connected in any way with bezveza, but politically these topics were in the same implication, therefore, in Brussels take into account including a referendum in the Netherlands”, – he said.

Another factor that influenced the delay in the issue of visa liberalization, some sources called the presidential elections in France, which will take place in April 2017. However, other sources deny this. Information leakage about what the French side asked to postpone the granting Ukraine bezveza appeared on the eve of the summit Ukraine-EU in the end of last year. However, it was denied in France and in Brussels, said that countries that block all bezveza Ukraine, no. According to Fesenko, indirectly, elections in France in some way still be affected could.

“Although Deputy Minister of foreign Affairs of Ukraine Olena zerkal said that, after all, the decision likely will be made before the elections. But will take effect after” – said Fesenko.

A more concrete date of a possible decision on granting Ukraine a visa-free regime yet. At the moment the situation looks like that, most likely, in 2017 Ukraine will receive, Fesenko said. However, to be completely sure that the end of this process it is impossible, says the expert.

“Today, the more likely that epic bezveza will end in 2017, and it will give us”

“The political decision has been made, the procedure has already begun. Theoretically, there may be a variety of surprise with the completion of the ratification of the Association Agreement. The Netherlands has ratified, but then there was a referendum and a situation that one country’s ratification of the Agreement appears to be frozen, – said Fesenko, – today, more than likely, that epic bezveza will end in 2017, and it will give us. This is the most likely solution. But a 100% guarantee, unfortunately, no,” – said Fesenko.

Recall that the European Parliament has removed from its website the indicative date for the vote on visa-free regime for Ukraine. Initially it was assumed that MEPs will consider the Ukrainian question on 18 January. However, later the date was changed to February 1 and after a few days in the registration card of bill “bezveze” there are reports that the vote on Ukraine will take place on 3 April, but then disappeared and it: information about the future of voting completely removed from the site. 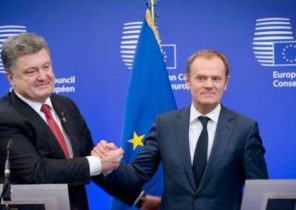