For 25 years after the collapse of the Soviet Union, Russia conducted several building their military capabilities at the border, and sometimes this was accompanied by the rattling of nuclear weapons in response to the provocations of the United States. However, the muted reaction to the recent statement by Donald trump that the United States should increase its nuclear capacity reflects the availability of other military and economic reality for Russia — reality, in which Russia realizes that it cannot afford to maintain the necessary pace in the new arms race.

Made by trump on 23 December, the statement that the nuclear potential of the United States should increase, occurred just at the moment when President Barack Obama signed the vast bill on military expenditures in the amount 618,7 billion dollars. These observations trump, and especially his strange statement about the resumption of the arms race, drew criticism from the Kremlin. Press Secretary of Russian President Dmitry Peskov said that his country will not participate in the arms race, and the official representative of the Ministry of foreign Affairs Maria Zakharova criticized the United States for attempting to bring Russia to death with costs. In recent years, Russia has used the news of the build-up of arms by the United States to justify increasing their own arsenals, but the echoes of the catastrophic consequences of the vast Soviet defense spending in the 1980-ies gave Moscow pause. A more moderate tone of Russia does not mean that it will abandon its plans in the field of defense. Rather, it means that the Kremlin does not want a repeat of that excessive defense spending, which has accelerated the demise of the Soviet Union.

The United States and Russia have long been involved in a tough confrontation over Moscow’s neighbouring States, and tensions between the two countries intensified after 2014 because of the conflict in Ukraine and Syria. Washington and Russia are implementing long-term plans in anticipation of the ongoing antagonism. The United States is taking measures aimed at the strengthening of NATO forces along the EU’s Eastern flank. Washington may have placed ground-based missile system in Romania and plans, starting next year, to increase the rotation of NATO forces. In addition, the United States is in the process of implementation of the plan with funding of $ 350 billion to modernize all three elements of the nuclear triad — bombers, submarines and land-based missiles, but this upgrade is not the same as expansion of its Arsenal.

In response, Russia is engaged in the transformation of its armed forces by introducing a structure of divisional level focused on keeping the most modern of military action against a potential enemy such as NATO. Moscow placed 1st guards tank army on its Western borders as a spearhead force prepared to conduct offensive and defensive operations in Europe, and still there are plans to add three teams with the same challenges and the same opportunities. Moscow in November announced that it will be placed in Kaliningrad, its European exclave, anti-aircraft missile systems s-400 “Triumph” and can be equipped with nuclear warheads mobile missile system “Iskander”.

However, Russia is trying to adapt their skills to achieve strategic advantages to modern realities and not to repeat the mistakes of the cold war. According to the current strategy of Russian foreign policy, known as Strategic vision (Strategic Concept), it prepares for the future hostile actions in relations with the West, which will take the form of a more asymmetrical and to a greater extent mediated regional conflicts such as the conflict in Ukraine, but not direct military or nuclear confrontation.

Global proxy war played a significant role in considerations of Moscow during the cold war, but today its tactics to focus more on the struggle in the regions that are closer to their own borders. NATO remains the main concern, as evidenced by steps to strengthen its military positions, but Russia can not afford to go even further in its confrontation with the West. Prolonged economic recession and falling oil prices forced the Kremlin to reduce the national budget in 2016. Military spending declined from $ 66 billion in 2015 to $ 50 billion, accounting for 4% of gross domestic product. However, a slight recovery in oil prices allow the Kremlin to allocate an additional $ 12 billion of its defense industry. Although Moscow plans to increase the defence budget to $ 60 billion in 2017, military spending of the United States is still ten times better than these figures. However, Russia’s decision to keep half its Federal budget for 2017 means that the true amount of defense spending remains unknown. Making opaque your budget, the Kremlin finds the flexibility and the ability to send money to their defense without having to displease the increasingly poor population of Russia, social support is reduced.

However, the ability to reallocate the budget money will not allow the Kremlin to get involved in such an arms race that existed in the last years of the cold war and contributed to the bankruptcy of the Soviet Union. In the 1970s, years Washington covered ideas about what the Advice is much more powerful than the allies of the United States. The Pentagon changed its strategy aimed at strengthening the offensive capability that can be used against the Soviet Union, and doubled defense spending in the period between 1980 and 1989, by year and in the financial race the Soviets were unable to win. In addition, the beginning of works on creation of anti-missile systems in the strategic defense initiative (colloquially it is called “star wars”) demonstrated the enormous technological superiority of the United States over the Soviet Union.

The legacy of those days continues to exert a strong influence on the decision-making process in the Kremlin during his current confrontation with the West.

Increasing political, social and economic weakness of Russia remind us of the experience of the Soviet Union in the period of its death agony. Moscow can avoid such kind of instability that occurred in the late 1980-ies and early 1990-ies, if it will heed the lessons of that time. The quick reaction of the Kremlin on the assumption trump on a possible future arms race is an indicator of the presence of this kind of thinking.

However, Moscow’s reaction is also a Testament to the opportunities that, in her opinion, will exist in 2017 to mitigate a certain amount of foreign pressure. The differences in the European Union deepened, and the common Western front was pressing against the Russia in recent years, is showing signs of stress.

In addition, Moscow sees good opportunities in a future presidential administration to reduce tensions between the two countries. Although it does not lead to the cessation of conflict, increased interaction can cause a weakening of certain types of pressure such as economic sanctions and military plans. At this stage of the transfer of leadership in the United States, the Kremlin does not want to risk being perceived as a hostile factor. So Russia will maintain its strategic position, directed against the United States and its allies, but will try to make the tension with them was manageable. 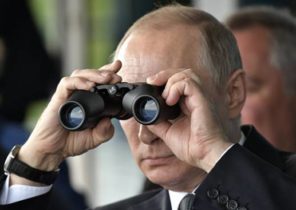