Polskie Radio: We are witnessing a rather unexpected turn in the case of the “Nord stream — 2”. In the US Congress introduced a draft law on new sanctions against the pipeline, which may, in particular, concern the insurance company. Reports on the preparation of new measures, however, there were a few months ago, however, I doubt that they will become a reality. However, the draft amendments to the law “On protection of energy safety of Europe” is already in the Senate. Previous measures have proved very effective: in December from a construction site left the Swiss company “Elsis and Nord stream — 2” the Russians still have not completed.

Mateusz of Kubiak: Signals that the U.S. will again take the sanctions act in relation to the “Nord stream — 2” is, indeed, lately appeared. In February in the German press wrote that Washington is unable to adopt a new law on sanctions in March. It was said that the restrictive measures will apply to future buyers of gas coming through this pipeline. It looked unreal, because in that case, the United States would deal a blow to the largest European companies. This decision had no right to exist for political reasons.

Later he heard other messages. That is working on new sanctions, hinted, for example, Ukrainian concern “Naftogaz”. In the last two weeks of the course of events has accelerated. Finally the project of new sanctions introduced in Congress. As expected, it won’t be a blow to European companies. Previously, there was speculation that sanctions could hit Russia’s Gazprom, but it didn’t look too likely. We see the development of the only truly realistic scenario: we are talking about extension of existing measures so that they remain sectoral, adjusted and hit the most sensitive areas of investment.

— This could be a watershed event, the nail in the coffin of the pipeline “Nord stream — 2”.

I’ll emphasize that on the turn too early, because we don’t know how the situation will develop. Congress must still approve the law. It is unknown when it will happen, how long will you last work on it, although the authors say that on this issue there is a consensus, and we must act quickly. They believe that the law should come into force immediately, despite the fact that the USA is the election campaign. It should also be noted that the text of the law in the course of its review may change. While there is only a draft, need to wait for the final version.

— If sanctions against companies dealing with insurance and laying pipes really is approved, the project “Northern stream — 2” will be blocked, buried?

— I would not focus on insurance companies. The ship “Akademik Chersky” since 2016 the Russian insurance insured Fund, incidentally, is also owned by Gazprom. While the Russians after the imposition of sanctions for the annexation of Crimea has created his own company, which is engaged in the reinsurance of risks. So the problems with insurance of the vessel, construction works and so on arise they should not. In short, I do not think sanctions against insurers a key element of the discussed measures.

So far sanctions have been applied only to the court, lay pipe at certain depths, as well as companies who own them and give them to use. The new measures are intended to apply to firms that provide other services or other equipment to conduct any sort of work associated with the construction of the pipeline (we are talking about all kinds of supplementary activities, such as dredging, filling, gravel).

Important is the fact that the restrictive measures can be extended to companies providing services for certification of the pipelines before commissioning it is necessary to fix compliance of such object to the project on which it was built, industry standards. There may be a problem. The question arises, will not decline if sanctions are to refuse to participate in the company Norwegian certification company “Det Norske Veritas”. This is a company that plays a key role. Such firms are few, they act on a global market and can’t afford to fall under sanctions. Namely, by her standards was designed and built in the Russian pipeline. The Russians signed with “Det Norske Veritas” agreement to certify its compliance with the project and standards. Will the Russian side, if the Norwegians refuse to cooperate, find another company that confirms the compliance of the gas pipeline standards?

In this role needs to be an independent organization, so if the Russians decide to certify compliance on their own, it could theoretically be the basis for challenging the result of such certification. We in the “Asperis” last fall wrote that this is the second of the possible methods how the Americans could strike at the “Nord stream — 2”. This element is particularly important.

— Media reported that in Congress there is bipartisan consensus on the bill. Then the probability that in the coffin of the “Nord stream — 2” hammered the final nail, large.

— You need to wait, as events will develop. The previous law was discussed for a very long time, and the process of its adoption was not smooth, even though formally disapproved of his policies from both parties. You should note that in the present bill is an indication of the sanctions retroactively, from December last year, that is, starting from the moment when the first law on restrictive measures. This item is sure to be challenged, to endorse his political point of view, the Congress will be especially difficult, because in this way open the way for sanctions against companies who worked on the construction of “Nord stream — 2” in recent months.

The very laying of pipes was suspended, but at the same time, work continued related to the exploration of the sea bottom, a filling of rubble. A few days ago was engaged in a major Dutch company that is a major player in international markets. One may wonder, is it right to punish such an organization, because they could not know that could fall under sanctions. I think a point to keep will be difficult, probably, from the final text of the law removed.

But, importantly, even if this paragraph will exclude, the situation with certification companies will not be affected. Importantly, the law adopted on time, because those come in when the construction is completed. We return to a situation in which a key role is played by time. What’s left of Americans ‘ time for approval of a law depends on how quickly will go work on the laying of the remaining length.

— Is it possible to say how long it will take Moscow to complete construction of the “Nord stream — 2”?

— A vessel which, apparently, will finish the “Nord stream — 2”, “Academician Chersky”, is now in the German port of Mukran, there is the barge-laying vessel “Fortuna”. While the Russians are preparing, in June work, they will not resume. We don’t know whether this will happen in July or a break in the construction will be delayed. We can only make assumptions, how long will it take the Russian side. In my opinion, one pipe-laying will take three to four months.

— If you think that the time for the imposition of sanctions, the Congress was left with little.

Time actually not much, it all depends on when the Russians will continue to build. The question is, do not decide whether Western companies that cooperate with them, to suspend work already, although the date of introduction of restrictive measures and their final form remains unknown. It would be impossible to carry out some minor works. If contractors are afraid of having the retrospective nature of the sanctions, in the process of building the “Nord stream — 2”, there will be additional problems.

— In recent weeks, the project was dealt other blows. There were, in particular, the verdict of the EU Court in the case of “Nord stream — 2”. The Russians wanted the norms of the European energy package was not distributed to the sea part of the pipeline. 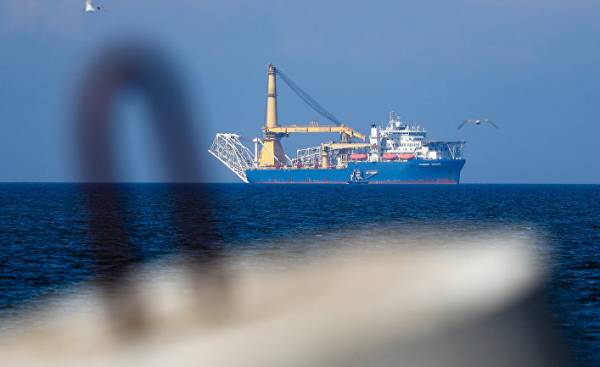 © RIA Novosti, Mikhail Golenkov | go to fotobanka pipelayer “Akademik Chersky” in the port of Kaliningrad— we are Talking about the negative decision of the German regulator, acting by the authority which had to decide whether to make for the “Nord stream — 2” exception in respect of the use of the new EU legislation. From the point of view of simple logic it was the only rightful course of action: to bring the pipeline from the application of the European norms would have to say that its construction was completed in the past year.

— This decision may result for the Russians in serious trouble. There are several aspects: the question of access to the capacity of the pipeline, the separation of ownership (the operator of the pipeline may not be the company that is engaged in the sale of gas supplied by him), transparency of tariffs, ensuring equal conditions for the use of infrastructure for all parties. The Kremlin hoped that he will be able to use “North stream — 2”, on its own terms, but it will not work.

— Polish Office for protection of competition and consumers has initiated an investigation against Gazprom for the fact that he was not going to cooperate in the course of antitrust proceedings.

— While we’re only dealing with a threat to impose a penalty for failure to provide documents and to cooperate in the framework launched in 2018 investigation. We are talking about the mechanism of financing the construction of “Nord stream — 2”. Last year, a large fine imposed, in particular, a French company, “Angie”, which did not respond to the request of USKP and did not provide the required documentation. Now the Agency is threatening to the same Gazprom. However, some further information on the subject of the investigation, that is, the funding schemes of the “Nord stream — 2”, will have to wait.

— The investigation is still ongoing. Thank you for the interview.