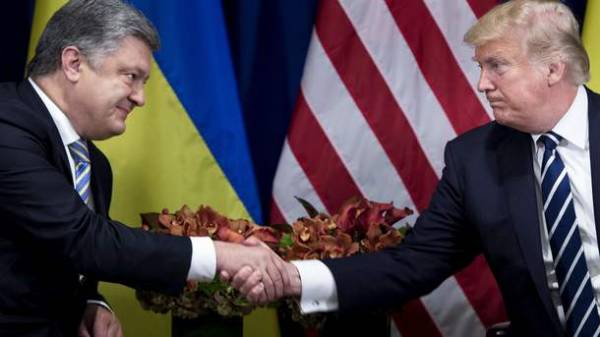 Yesterday in new York on the sidelines of the 72nd session of the UN General Assembly took place the meeting of President of Ukraine Petro Poroshenko and U.S. President Donald trump. The talks lasted more than an hour. In the meeting of the presidents was also attended by Vice-President Mike Pence, Secretary of state, USA Rex Tillerson, the President’s Advisor on national security Herbert McMaster, special representative of the President in Ukraine Kurt Volker and other officials.

What Poroshenko said and trump

President of Ukraine Petro Poroshenko said that the meeting with the President of the United States Donald trump was “extremely productive.” The Ukrainian leader said he is pleased with the unprecedented level of cooperation between the two countries. Poroshenko also said that the United States fully supported the position of Ukraine concerning the deployment of peacekeeping missions in the occupied part of Donbass. According to him, today “a large number of world leaders to support Ukraine in our righteous fight with the Russian aggressor.”

Also, according to Poroshenko, during the meeting they managed to discuss all the issues in the field of security. “It is extremely important that there is shared vision of a new quality of cooperation in security matters. We have discussed all directions of expansion of this cooperation, ranging from cooperation with the military Academy of West-Point and ending cooperation with U.S. Department of defense and other institutions,” he said.

In addition, the President of Ukraine announced reaching an agreement with trump to continue to cooperate in the conduct and support of reforms. “For me it was very important to hear a full, strong support of reforms in Ukraine, and a positive assessment of the results that we have these reforms achieved. It is extremely important to us. And we agreed that our cooperation in supporting reform will effectively continue,” – said Poroshenko.

Moreover, the Ukrainian head of state noted that the details discussed with his U.S. counterpart economic cooperation between the two countries. The President of Ukraine considers the successful placement of Ukrainian securities in the global markets as economic support for the reforms pursued by the official Kiev.

“Investors dollar vote for success and confidence in Ukrainian reforms. And I was pleased that a significant number of these investors were American companies,” – said Poroshenko.

The US President Donald trump, in turn, noted the progress achieved by Ukraine in recent months. “I wouldn’t say that now (Ukraine. – Ed.) is a comfortable country to live in, but you make it better and better every day, and I hear very good things, so Ukraine are going well,” said trump.

As a meeting of Poroshenko and trump experts estimate

Political experts agree that it is important that the meeting Poroshenko and trump place, as well as the fact that it was long. As the Director of the Institute of socio-political designing “Dialogue” Andriy Miselyuk, Donald trump is biased to Ukraine due to the fact that during the US presidential election she supported a rival to trump Hillary Clinton. In these circumstances, any dialogue on the presidential level is a clear advantage for Ukraine because it allows you to convey the most important messages.

“I think this is an obvious indicator of progress in respect of the two presidents have much to talk about and have a desire to discuss the whole range of important issues,” he tells “Today,” political analyst Volodymyr Fesenko.

The expert stressed that the main topics that were addressed at this meeting – the peacekeeping mission in the Donbas and bilateral relations. But equally important was the theme of the possibility of U.S. lethal weapons Ukraine. However, specific statements regarding this issue following the meeting did neither the one nor the other the President.

“There is no doubt that Poroshenko this topic at the meeting with trump was raised. The more that just adopted a draft budget of the USA and there it says. And I think that Poroshenko, probed, questioned, and trump something he answered. But his response he does not want to advertise, says Fesenko – I think that the lack of information about this conversation a bit annoying Moscow, because they don’t know the answer… Besides, trump may understand – very delicate this subject.”

So, trump is still interested to continue the dialogue with Russia, but will not make concessions on Ukraine, Fesenko said. That is, the situation is contradictory – the President of the United States should help Ukraine, and at the same time, and still without completely spoiling relations with Russia. Therefore, such a sensitive topic like the military-technical cooperation with Ukraine and lethal weapons, were not voiced, the analyst believes.

According to Misalucha, the U.S. has not yet approached subject to the decision of a question on possibility of granting Ukraine lethal weapons. Also it is impossible to say that America is ready for extraordinary steps in order to protect the joint Ukraine ideas about peacekeeping contingent in the Donbass, the expert believes.

“Meaning no new message from trump has not sounded. This suggests that, first, today the U.S. administration is not ready to solve neither in the direction of “Yes” nor “no” the question of granting Ukraine defensive weapons lethal action. Second, the US government is not ready to go (with Russia – ed.) any confrontation on the issue of peacekeepers,” – said Miseluk.

Thus, according to political analyst Eugene Magda, today the probability of introduction of the peacekeeping mission in the format in which it sees Ukraine, more real than providing America with lethal weapons.

“Although the fight over the format of the peacekeeping operation in the Donbas continues, Washington’s support for the Ukrainian “blue helmets” throughout the conflict zone makes it not entirely hopeless. As for me, as of today, the peacekeepers are more real than the provision of lethal weapons,” he wrote.

However, as the political scientist Paul NUSS, the results of yesterday’s talks between the two leaders will be more visible over time – after you worked on them at the Executive level.

“Leaders discuss strategically important topics, and you should not expect excellent publicity the outcomes of this meeting. As before the first meeting of Poroshenko and trump, and now, I will say that the outcome of these negotiations will be felt over time, after the drill at the working group level,” wrote NUSS.

We will remind that the President of Ukraine Petro Poroshenko remains on a four-day visit to the United States. On 20 September, the Ukrainian leader spoke at the 72nd session of the UN General Assembly in new York. He talked about the Donbass, the peacekeepers, Russia, de-occupation of Crimea. The full text of his speech can be read here.