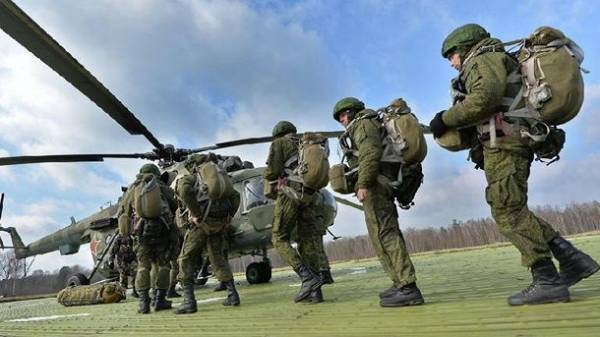 Despite all the fears, Russia will not leave in Belarus after the joint military exercises of its equipment and soldiers to blackmail or put pressure on the Baltic States, Poland and Ukraine.

Comments about this “Today” said the national security Advisor of the office of the President of Latvia Janis kazocins.

“Undoubtedly, Ukraine is now a very worrying time, not only because of the illegal annexation and occupation of Crimea, ongoing war in the Donbass, but also because of the exercises “West-2017″. It is a clear threat to Ukraine. At the same time I think there are a number of factors which currently deter the Kremlin from aggression. First, the Kremlin wants the abolition of the Western sanctions, because economically they are beaten in Russia. Secondly, Russia in 2018 will accept the world championship on football which for Russian prestige is extremely important. So I think that in the current realities for Russia and Putin personally, it is important to stand in the status of a peacemaker, for example, on North Korea, which the Ukrainians, of course, do not see. But he tries to present himself that way. The Kremlin is more focused on the things that will give Putin the impetus for his next presidential term,” – says Janis kazocins.

difficult to guess that Russia will take. Along with this Russia is really not interested in escalation. The purpose of the exercise “West-2017” in many ways – to practice in a very fast movement of a vast array of personnel and equipment.

“Negative diplomatic consequences that will follow if Russia did leave soldiers and equipment in Belarus after the exercises, saying that this will not happen. It’s just not worth it, it’s not in their interests. Yes, Lukashenko depends on Russia. But Lukashenko is well aware of the events that happened in South Ossetia and Abkhazia. Lukashenko is trying to be a mediator between Russia and Ukraine on the Minsk process. And that means he’s trying to play his own game. We also understand that economically it is very connected with Russia. But Russia has to reckon with Lukashenko, as of today no alternative to it”, – concluded the national security Advisor of the office of the President of Latvia.

We will remind, today in Belarus start military exercises “Zapad-2017” which will take place from 14 to 20 September. Russia dropped to 13 thousand servicemen, about 70 aircraft and helicopters, and 250 tanks.

As stated in the state border service of Ukraine, the forces that Russia has accumulated for the participation in the exercises “West-2017”, is not enough for incursion into the territory of Ukraine. Guards note that the exercises Russia will use to strengthen its positions in Belarus.

In the gallery, the visitor stabbed the picture Gainsborough