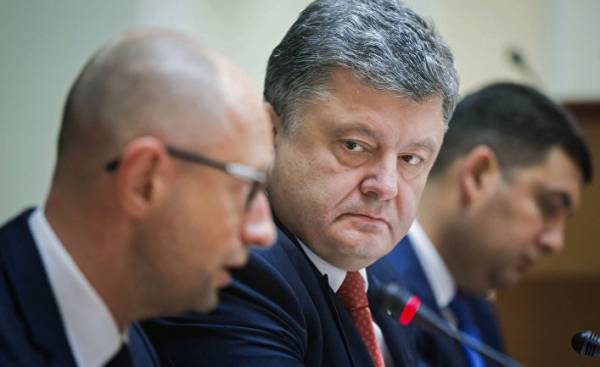 Public administration reform is one of the main countries with economies in transition, implementing comprehensive reforms in various policy areas.

In a world where competing is not the goods or services, and the models and management efficiency, Ukraine has a chance to become competitive government only under condition of building an effective, accountable and transparent Executive branch.

Now, according to the Index of global competitiveness the World economic forum (2015), Ukraine occupies the 130th place (among 144 countries) in the category of “government efficiency”, 103-e — in the category “transparency of state policy” and 115-e — in the category of “burden of government regulation”. The poorest and most corrupt country of Europe, energy dependent and inefficient, burdened by internal and external debts, with the worst in Europe roads and collapsed medicine, etc., etc. — all these are symptoms of a highly inefficient and corrupt system of public administration.

The experience of some of the sectoral reforms in Ukraine only confirms one of the axioms of management: to build is much easier than to rebuild.

Real reform (perestroika) must always go through three stages: two of them — the destruction of the old and building (creating) new. And between these two — the stage of chaos (grave), when the main thing — to keep the situation before the start of the new system. Creative managers often believe that if they know how it should be (and it is not always the case), it is possible to carry out reforms. Although most of the “reformers” are blown on the stage of destruction, faced with the resistance of the system, many of them adapt and accept the rules of the system, the same — just walk away. Minority moving on. About half of them through a phase of chaos (such managers either leave themselves, or their “go”, “What have you done! It’s not what you promised, and why we hired you!”). And everything returns to its previous state, with even worse consequences (for example — almost all the “reforms” in Ukraine, 2014-2015). We can’t afford to build a new state with a clean slate, so have to move difficult and ungrateful by rebuilding what you have. And here we encounter a problem: where to find reformist politicians who are willing and able to hold the public administration system through the stages of destruction and chaos, to find strength, perseverance and competence to survive and to bring the reform to the stage of development and approval of a new? And as a result, with high probability, become the most hated politicians in the country. Which, possibly, later, in 10 years, recognize the reformers and heroes.

Through these stages passed, the reformers of all countries and peoples, we remember either the most successful or losers. Hoover and Roosevelt, Balcerowicz and Walesa, Bendukidze and Saakashvili, Pinochet, Adenauer, Thatcher — all at the time, there were problems with recognition in their own countries, and not all with the time acknowledged reformers and national heroes. The specificity of the public administration reform is the reform of the entire government, so its leader can only be the head of the Cabinet. For this reform, it needs to rely on the team, who know how to do it, and support their leader. Moreover, the government should be the majority of the adherents of the reform and of those, at least, will not interfere.

Moreover, the EU not only provides expert support for the reform, but also willing to financially support her — at the end of last year an agreement was signed between the government of Ukraine and the European Commission on financing the programme “support to the comprehensive reform of public administration in Ukraine” for a total amount of 104 million euros. Reforms in these four areas have different histories and are moving at different speeds. If civil service reform, albeit with some delay and problems, still moves after the enactment of the new Law “On civil service” and the management reform of public finances under the watchful eye of the IMF and the EU, engaged in personally by the Finance Minister Alexander danyluk, the effectiveness of the reform of the other two directions, to put it mildly, far from desirable.

As follows from the experience more or less successful reforms in Ukraine, these reforms, unfortunately, were not implemented by state officials — employees of the ministries and other bodies of Central Executive power. Rather the opposite: civil servants, or simply sabotage the reform, or mend her obstacles. And this is natural from the point of view of the laws of crisis management and change management.

The reforms are successful where there is a reform leader (usually the Minister) and a team of reformers. And after passing the stage of chaos to the team, gradually to join public servants. For example, it was with the team ProZorro and GP “PROSARO” (last — GP “Soundtree Ukraine”): employees of GP at first vehemently resisted the reform of the public procurement system, later joined and strengthened the team of reformers (though in the process some of whom had to get rid of).

That is, for the start of the reforms, except the leader and his “political will” competence and determination, you need a small but cohesive and determined team of reformers, способнаz and готоваz reform through a stage of chaos.

In Ukraine already there are “generals” of the reform of the public administration responsible for the implementation of its directions: the Minister of the Cabinet of Ministers (in the direction of reform and CMU CEPA), Chairman of the National Agency for civil service (civil service reform), Minister of justice (reform of administrative services) and Finance Minister (reform of public Finance management). Already more or less formed even teams of reforms in the directions. And allies in the face of our partners (the EU, Canada and USA) is ready to support reform of its financial and expert resources.

Unfortunately, what the commander (Prime Minister) can’t decide to head the headquarters of the reform. Perhaps because not confident in their rear, or to the team? May not quite sure of its urgency (maybe it goes somehow resolve)? May not have appreciated the power of opponents of reform and consequences of a possible defeat? Or just don’t want to be “hated reformer”?

The system of public administration reform was carried out, since the 80-ies of the last century, in Canada, Brazil, great Britain, New Zealand, Poland, the Baltic States, Slovakia, Slovenia, Croatia and others. All of these countries eventually received a powerful impetus to economic and social development for many years and was among the leaders in the social standards and economic performance in the world.

Ukraine also foolishly losing 25 years, is still marking time and losing valuable time due to indecision of their leaders. In a society already formed a strong social demand for reform. Sooner or later a leader in such reforms, if these heads of state is still not enough leadership and decisiveness.