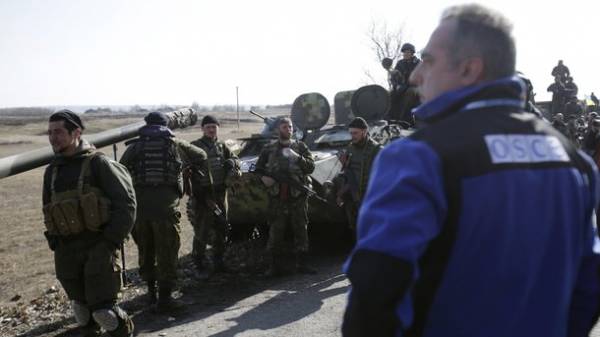 Ukraine and Russia were sent to the headquarters of the UN its resolution on the UN peacekeeping mission in the Donbass.

THE PROPOSALS OF THE RUSSIAN FEDERATION. Russian diplomats submitted a draft resolution on the deployment of “blue helmets” in the Donbass after the announcement of the President of the Russian Federation peacekeepers. Putin voiced the following conditions: the peacemakers shall be used exclusively for the protection of the OSCE mission and placed only along the demarcation line in the Donbas. The entry of peacekeepers should happen after the withdrawal of heavy weapons (from the Ukrainian army, of course) and confirmed all steps with the leadership of the breakaway “republics”.

Somebody saw such a reaction and approval of the appearance of peacekeepers slack master of the Kremlin and the freezing of the conflict in the East of Ukraine, who, on the contrary, considers Putin’s maneuver another “mnogohodovok” the meaning of which will become clear later.

UKRAINE. Commenting on the resolution of the Russians, the Ukrainian foreign Ministry recalled that in March 2015 President of Ukraine Petro Poroshenko has sent to the Secretary General and head of UN security Council appeal on the deployment in Ukraine of a peacekeeping operation under UN auspices.

“Yet it is Russia sabotaged Ukraine’s proposals, refusing to consider our appeal in the security Council and even claiming that Ukraine did not treated”, — noted in the Ministry of foreign Affairs of Ukraine. And stressed that Putin’s proposal is the idea about joining the peacekeeping mission of Russia. But this can not be considered.

“We cannot talk about the presence of military or other personnel of the aggressor party in the territory of Ukraine under the guise of peacekeepers, which is contrary to the principles of UN peacekeeping”, — categorically stated in our foreign Ministry. So part of the “mnogohodovochki” was solved immediately.

Permanent representative of Ukraine to the United Nations Volodymyr Yelchenko announced the main points of the Ukrainian resolution on the peacekeepers. “Surely this mission should be stated that she will be on the whole territory of Donbass, in the first place on the Ukrainian-Russian state border. The fundamental question for us to expand the UN mission of all foreign troops, and they’re alone, the Russian Federation,” — said Yelchenko. According to him, if necessary, will be provided in an alternative version of the resolution. “Another option is to operate on the basis of the Russian project. But this does not mean that everything should remain the way they were written”, — said the diplomat.

EXAMINATION. Political analysts believe that in the case of the composition of UN peacekeeping forces representatives from Russia, the process goes according to the scenario of the Kremlin. And Ukraine will receive in the East the same situation, what was Georgia with South Ossetia until 2008.

“This initiative leads to the freezing of the conflict. If not Russia, then a part of the peacekeepers will include Kazakhstan, Belarus, Venezuela and other countries that support Russia, — the Chairman of the Board of the Centre for sociological studies, Paul Zhovnirenko. — UN peacekeepers enters for the division, leading the fighting. Russia says to deploy peacekeepers only on the Ukrainian-Russian border. But there is no fighting, there is nobody to separate them. Is that Russian troops with their puppets “DNR/LNR”, but it’s not the same”.

Political analyst Vadim Karasev said about the possible transfer of the question of the peacekeeping mission in the Normandy format. “Most likely, the Ukrainian resolution impose a veto by Russia. If the positions of the US and the UK will be on the side of our country, the Americans would block the Russian resolution. Since none of the documents will not receive the approval of the UN security Council, then the matter shall be postponed to the discussion of the “channel four”, — says the analyst. — Then we can expect a compromise on the peacekeepers or maintaining the present status quo in Donbas”.

The escalation of the conflict and the numerous provocations fears the military expert Giorgi Samanishvili in the case of the introduction of the UN peacekeeping mission in the Donbass: “In the case of the first peacekeepers in the occupied territories, the situation may deteriorate. Do not forget that propaganda is working at full steam, according to the latest “manuals” of militants, it is believed that the people of Donbass against any of the missions. Putin’s statement was shot down with the rhythm of the flywheel is propaganda, what to do — no one knows. Fighters can start to preheat the degree of hatred among the inhabitants of the occupied territories to Ukraine in the usual way — by attacks, which is issued for Ukrainian. Also do not rule out attacks on the peacekeepers themselves with the purpose of provocation. But in any case it is necessary to look at the situation. As time has shown, it is changing rapidly”.