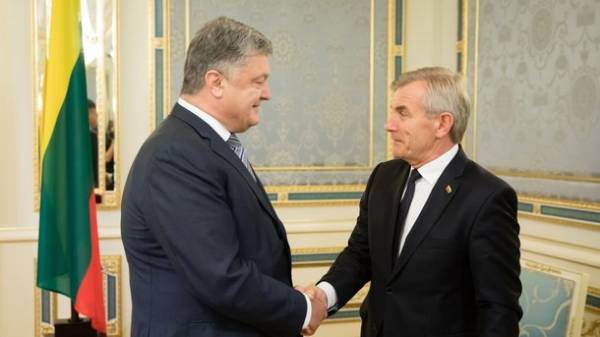 President of Ukraine Petro Poroshenko discussed with the speaker of the Seimas Lithuania Viktoras pranckietis a “Marshall Plan” for Kiev. About it reports a press-service of Administration of the President.

“During the meeting discussed the issues of practical implementation of the initiative of the Parliament of Lithuania “the New European plan for Ukraine for 2017-2020.” (the so-called “Marshall Plan for Ukraine”), which provides for the provision of powerful financial and investment support and assistance for reform. Agreed on the further coordination of the work with a view to its approval and support from the EU”, – stated in the message.

As noted, the President expressed gratitude for consistent position of Lithuania regarding the support for the sovereignty and territorial integrity of Ukraine and condemnation of Russian aggression and illegal occupation of Crimea.

“The sides expressed concern over the continuation of the aggressive policy of the Russian Federation in the context of the militarization of the temporarily occupied Ukrainian Crimea, and Russian military exercises along their common borders. They noted the importance of further coordinated international efforts to counter Russia’s aggressive actions, primarily through continued application and enforcement of appropriate sanctions”, – stated in the message.

Earlier, the Chairman of the Verkhovna Rada of Ukraine Andriy paruby said that “Marshall Plan” for Ukraine today finds more allies in Europe and in America.