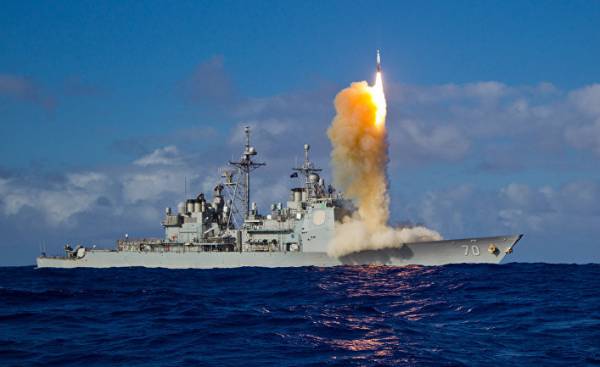 Japan, USA and ROK hold joint military exercises in East Asia, where the tension is growing because of the fact that the DPRK launches missiles. Japan will play a greater role than ever before. In the South China sea will also be sent to the largest patrol ship “Izumo” Maritime self-defense force of Japan.

March 14 in the adjacent waters of Japan and the ROK began joint military exercises the United States, Japan and South Korea, during which the parties will work out a system of defense against ballistic missiles. March 15 began the first trip to Asia, Secretary of state of USA Rex Tillerson (Rex Tillerson).

The joint exercise will involve three ships of the class “aegis” (Aegis), equipped with a defense system against ballistic missiles. The maneuvers were being held in connection with the fact that on March 6, North Korea launched a ballistic missile towards the sea of Japan. Last week in South Korea was a part of the equipment of the us missile defense system THAAD.

China and South Korea expressed strong protest in connection with the joint exercises and deployment of the THAAD system. They issued a statement criticizing these actions. The result Tillerson, who will visit Japan, South Korea and China are in the midst of the above events will be in the center of even more attention.

The press Secretary of the foreign Ministry of China on March 14 criticized the DPRK and the United States, Japan and South Korea: “North Korea stressed that it would continue nuclear development despite past resolutions of the United Nations. USA, Japan and South Korea carry out large-scale military exercises. These exercises will only aggravate the tense situation in the region. They are not good for any of the countries.”

The DPRK has also published the critical statement in the local media. She threatened that if it violated its sovereignty, it will deal merciless and precise shot.

During the joint exercise the ships of the “aegis” of the three countries will fulfill the tactical cooperation to detect and defeat rockets. In addition, the aim also is to demonstrate to the world the convergence of Japan and South Korea, which has been the deterioration of relations, despite the fact that these countries are allies.

These exercises are extremely important also from the point of view that Maritime self-defense force of Japan will play a greater role in the region.

The government of Japan in may will be sent to the Indian ocean and the South China sea, where the growing tension between neighbouring countries in connection with the issue of sovereignty, the largest patrol ship “Izumo”, which will be in the region of three months. In July, the ship will take part in joint exercises the United States and India, which will be held in the Indian ocean. Until about two months he will be in the South China sea.

Japan has no territorial claims in the South China sea, however, she holds the position of freedom of movement. Perhaps the is also meant to exert pressure on China on the issue of the East China sea, where Tokyo and Beijing dispute the sovereignty of certain Islands.

The foreign Ministry of China stated that it does not bother the normal movement of Japanese ships. However, he stressed: “If the intentions of Japan in the South China sea are different, that’s another conversation.”