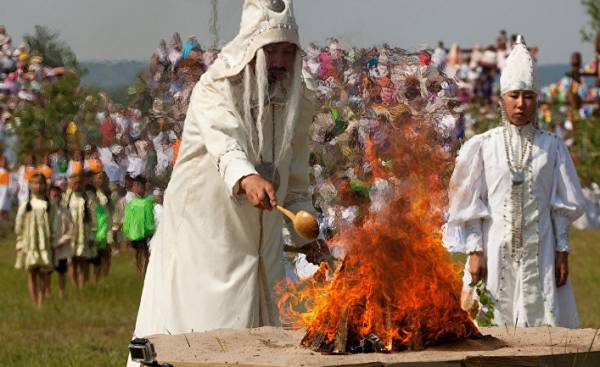 Siberia taught me a good lesson in June and July. If the winter in our village we encountered 50-degree cold, now it’s 35 degrees is very common. Here, on the Central Yakut plain, you can experience the most significant temperature changes in the world.

As in Finland, in Yakutia in summer, people come to life out of the burrows, shed their fur and expose the body.

Heat could be felt here as well as the frost: more afraid of the numbers on the thermometer. Nights are cooler. However, immediately after sunset, flying mosquitoes.

In the heat and celebrated Midsummer day, Ysyakh, which here, in Yakutia, is considered the most important holiday of the year.

Ysyakh is primarily a new year festival, during which pay tribute to the gods of the sun. In the heart of the holiday lies Tengrism, the ancient religion of the Turkic peoples. In Soviet times, the religious component of the holiday was eliminated, but in the last 30 years the tradition began to revive.

For reasons of expediency Ysyakh is celebrated in different areas on different days, so I was able to visit three festivals.

In every region of Yakutia observe their customs. Every family, neighbors and co-workers have their own permanent holiday cabin or at least tent.

The celebration of Ysyakh, which I attended, began with religious ceremonies. People were passing by the venue of the festival by women, who brandished brooms horsehair and lit incense.

Then the person conducting the ceremony, was sacrificed to the gods kumiss made from horse milk, deep-throat sang a song and people raised their hands to the sun.

To receive the blessing, people were crowding the tree of life which symbolizes the different areas of the world.

After the religious ceremonies Ysyakh became a celebration of culture and sport.

The scene was heard the roar of a Jew’s harp and cooing modern hits — in Yakutia the number of pop artists in relation to the number of residents is greatest.

Athletes competed in national sports, the most popular of which are pulling the stick (Mas-wrestling) and Yakut wrestling hapsagay. Yakut national jumps have 11 jumps on one leg, 11 alternating jumping from foot to foot, and 11 jumping with two feet.

The Ysyakh program includes horse racing, but they are only horse-half. Short-legged, the Yakut horses are considered too slow for racing. The audience actively make bets.

The celebration of Ysyakh in Yakutsk entered this year in the Guinness Book of records. The official representative of the Book witnessed the world’s largest gathering of people dressed in national costumes. This record is unlikely to be able to beat anywhere else.

Previously, the record was set at the biggest dance of the Yakut dance osuokhay, which Ysyakh dance until sunrise. Leading dance takes the monotonous songs that sing along with the rest. I think I coped pretty well.

Midsummer festival in our village ended in a mad competition for the construction of the fence. The participants were planed and carried a four-meter blocks and installed them. Undoubtedly, it was a great fence, was 22 logs.

Ysyakh is celebrated sober — alcohol is not even sold.

In Yakutia, starting in 2010, is a strict anti-alcohol policy. More than one hundred villages and towns, the sale of alcohol is completely prohibited, others are limited time sales. Large activities are carried out without alcohol.

The impact of this campaign is quite controversial, and a drunkard, if desired, still be able to get yourself a bottle. On the festival of Ysyakh, the drunk, however, was very small. Local youth can have fun without alcohol.

I’ve done that myself with two 20-hour festivals sober. On the third I drank a glass of cognac — but it only happened in a special place reserved for journalists.