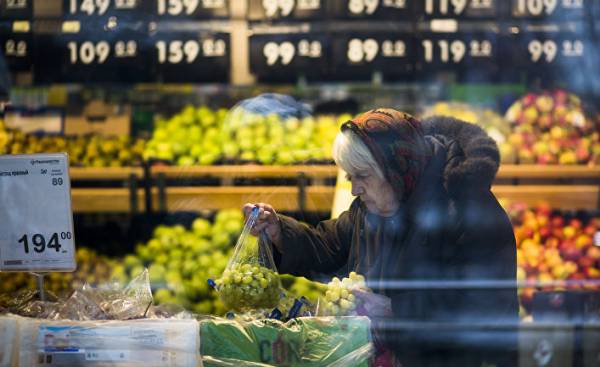 Since July of last year, Russia’s GDP began to grow steadily in the first half of 2017 rose 1.6%. The Russian economy has entered a new stage of slow growth.

In the report of the International monetary Fund (IMF) analysed the economic situation in Russia in the first half and the conclusion is that the Russian economy is starting to recover. At the same time, according to the Ministry of economic development, it is expected that the economy will grow by 2%. According to the world Bank, the economy will grow by 1.5%. The main economic indicators, Russia’s economy continues to stabilize and is already out on the stage of slow growth. It is important to note that the last few years, the Russian economy faced different challenges, and this has had a strong influence on the future of Russian-Chinese economic cooperation.

High inflation is the main problem hindering the country’s economic development and a key factor impeding the development of investment. However, in 2015, the figure dropped from 12.9% to 5.4% in 2016, and now it is 4.1%.From the point of view of material conditions of life of the people, the number of employed people is now breaking all records, and the level of unemployment in the country is the lowest in the history of the country. According to Rosstat, in the first half of 2017 incomes of Russians have ceased to fall.

The main reason for the economic crisis in Russia in 2014 economic sanctions the U.S. and European Union against Russia, they blocked the Russian financial channels in the international market. Besides, oil prices began to fall significantly, reaching $ 30 per barrel. It is worth noting that Russia is very dependent on the export of crude oil and natural gas, so again is mired in an “economic quagmire”.

According to the estimates of the former Minister of Finance Alexey Kudrin in 1999-2008 year coefficient of correlation of oil prices in the international market and growth of Russia’s GDP was $ 0.86, in 2009-2014 this factor achieved is 0.98. Then Russia became especially dependent on world oil prices.

To reduce the impact of Western sanctions and stabilize the macroeconomy in response to the economic crisis, Russia decided to pursue a policy of “import substitution”, to Fund the promotion of local products, to develop the far East region, to implement the strategy of “look to the East”. At the same time, it adopted a number of measures to simplify the creation and development of enterprises, such as: not to raise taxes on additional sources of income for small and medium enterprises in the first four years of their work, and for newly established small or medium enterprises to provide tax holidays for two years.

These measures are quite effective

For example, in the field of agriculture two years ago, Russia imposed restrictions on imports of vegetables and fruits, but due to the fact that the country is not able to provide themselves with these products, there was a strong inflation. For two years the Russian government has developed and promoted the agricultural sector, and at the moment Russia is able to meet the needs of consumers in the country.

Many scientists believe that the fall in oil prices below $ 30 per barrel will not be “an insurmountable obstacle to Russia”. After two years of struggle against crisis the Russian economy has become less dependent and more efficient.

How to achieve fast growth?

The economic downturn does not mean that the economy is in a difficult position. 15 June 2017 during the “Direct line with Putin”, people are most worried about one question: when will the economic crisis in Russia. To which the President replied: “the Russian economy has already reached the stage of “recession”, and enters a new period of “recovery””. The number of Russians living below the poverty line, is still increasing, so this issue bothers people.

The Russian presidential aide Andrei Belousov said that from the beginning of the crisis the level of poverty in Russia increased by five million people, the total number is about 19 million. The total income of this population is 13% below the subsistence level before the crisis was below 10%.

How to improve the lives of the people and at the same time, out of the crisis?— for the Russian government, the question at the moment is in the first place. In may 2015, after Putin was again elected President, he first put forward more than 200 tasks up to 2020 aimed at accelerating economic growth, population growth, increasing levels of education, modernization of the health sector, social sector, improving the quality of life. According to calculations of Russian scientists to achieve these goals, the average annual GDP growth rate must not be less than 5-6%.

Analysts believe that the sanctions the U.S. and Europe against Russia are unlikely to be reversed in the near future, Russian companies will continue to face obstacles in the international market. The Russian economy needs structural changes. Since the beginning of the crisis in Russia the economy is growing very slowly. According to the most optimistic calculations, the growth rate of Russia’s GDP is expected lower than average rate of growth of the world economy. How to join on the path of rapid growth? This is one of the most difficult and topical issues for the Russian government at the moment.

The deepening of Russian-Chinese trade and economic cooperation

Trade and economic relations between the two countries quickly develop, but first and foremost it is necessary to improve the main channels of trade between Russia and China, the problem lies in the fact that the Russian economy remains in need of restructuring.

According to the Main Chinese customs administration, in the period from January to July 2017 between the two countries imported and exported goods in the amount of 39 billion U.S. dollars, the figure increased by 25.7% compared to last year. This amount includes goods exported to China, worth $ 19 billion, compared with the same period last year, the amount increased by 22.2%.

In the process of implementation of the strategy “look to the East” Russia deepens its strategic partnership with China, combining economic potential of the two countries. Russian-Chinese trade and economic cooperation plays a huge role in the recovery of the Russian economy, especially in energy and agriculture.

In may 2014 Russia and China signed agreement worth $ 400 billion to supply natural gas to China for 30 years. In September 2015 in Vladivostok was held the first East economic forum, which was developed and signed a joint project with China and other countries for the sum about $ 200 billion. After that, it was announced that Vladivostok is becoming a “platform of advanced development”, providing preferential policies for foreign investors to speed up joint cooperation of Russia and China.

Russian-Chinese cooperation over the years has shown that the two economies complement each other. The Russian economy will soon begin to recover.