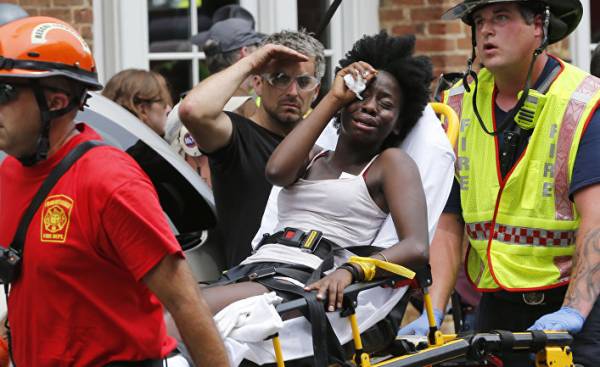 About the protests in Charlottesville last weekend, Roger Simon (Roger Simon) from Pajama Media, which characterizes itself as a “Jewish guy”, well he wrote the following: “the Types that surfaced in Charlottesville on Saturday, are, of course, people are the most disgusting, repulsive and damning kind, they are mostly cruel, it’s evil sociopaths. I wouldn’t mind if all of them gathered together, put on a spaceship and sent to the alpha Centauri”.

Take some “comparison”, Simon continues: “for the sake of argument let’s say that in modern America live 100 thousand people who believe in the superiority of the white race (of course, this is a huge exaggeration, but let’s use it, as I said, for the sake of argument). With the 1920s years our population has more than tripled — to nearly 325 million people. Using a value of 100 of thousands of white racists (a few of which, fortunately, reached Charlottesville), we can calculate that the percentage in the US is negligible — about 0.03%. Horrible people, Yes, but it is in any case not an epidemic, no matter how overactive imagination… But back to business. Exceeds the number of these white racist community in the same way brutal and disgusting antifa movement? And again statistical calculations difficult to implement (both sides love to wear masks). But in this I am inclined to doubt. Anyway, antifa till Saturday acted much more actively. Obviously I say this in no way not in order to justify human scum trapped in Charlottesville. I just made them available for comparison.”

I hope that President Trump has something to say on this issue, but — again — American presidents often frustrated us when it was based on hate violence and rhetoric of a small number of their supporters. Take, for example, our last President. Ferguson, mo (and time), Baltimore, Saint Paul, Baton Rouge, Dallas, Oakland and so on over and over again President Obama did not condemn the aggressive racists from the movement of the BLM (Black Lives Matter — black Lives mattered). On the contrary, Obama and the democratic party has regularly supported the dubious case of the BLM and provided them with political cover.

Despite the constant use of the movement of the violence, vandalism and racist rhetoric, in August 2015 the national democratic Committee adopted a resolution “approving” the BLM. In July 2016 at the funeral of five Dallas police officers killed by a racist, inspired by this movement, President Obama has continued to speak out in defense of the BLM. After the shootings in Dallas, the head of the law enforcement agencies accused President Obama that he is inciting a “war on police.”

It was reported in Politico: “”I think the continuing policy of [the Obama administration] to appease at the Federal level with the Ministry of justice, their policy of appeasement towards violent criminals, their refusal to condemn such movements as Black Lives Matter, actively calling for the murder police, all of this along with a condemnation of the police for all the problems in this country, led to the fact that the events in Dallas have been possible,” said Friday morning in an interview to Fox William Johnson (William Johnson), Executive Director of the National Association of police organizations.”

In addition, the movement of the BLM already said about the purpose of his existence. As noted in 2015 Pavlich Katie (Katie Pavlich): “the time has Come to condemn the movement Black Lives Matter, and to declare openly what it is: this racist, violent hate group, advocating for the murder of police officers. Evidence of this can be found in their rhetoric and written on their shirts”.

French legitimate asks: “How many despots and murderers should justify the movement of the BLM until it is dislodged to the life of America? How many riots and murders it should provoke — often via lies and fabrications?” Apparently, still not enough.

Despite all this, it was enough the only incident involving “White nationalists” — who can’t have even a hint of support from the President trump and his administration — all hotels in Charlottesville are racists suddenly become “the people” trump. Of course, left the experts are regularly called fools of Virginia, “trump’s people”, wanting to baptize any supporter of right-wing racist. Despite all the evidence linking Obama, Democrats and BLM, as I recall, the liberal media never sculpted in to the black racists, the label “people of Obama.”

It should not surprise anyone, and I think the double standards in this matter (and many others) will continue. Instead of trying to prove that trump is a racist event in Charlottesville primarily reveal the depth of corruption of the media left-wing.