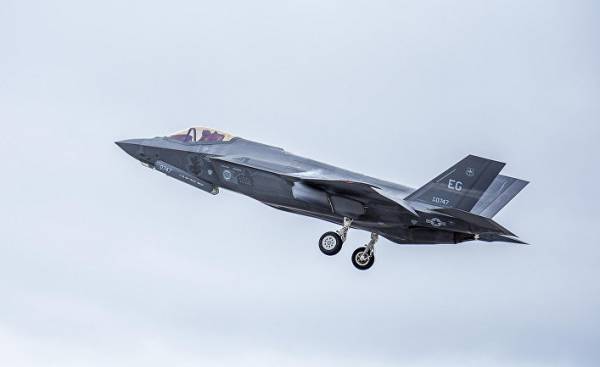 When the air force is preparing for the unlikely scenario of the situation in which an American air force will have to engage in battle with nearly equal forces of Russia or China, it recognizes that the greatest concern to him cause air defenses of those countries. The developers of F-35 aircraft emphasize that although there are no conflicts with these countries and the buyers of these funds is not expected, the air force want to be ready for any unforeseen circumstances.

The F-35 aircraft from the air force, use large polygons and computer modeling, ready to perform combat tasks in the conditions of counteraction of the best examples of the anti-missile technology to the Chinese and Russian production. Thus, the air force strive to prepare for all the enemy threats, which are to be expected in the mid 2020-ies and later.

These checks are aimed at solving the most urgent problems of the modern air defense systems, for example, the Russian production, and overcoming potential threats of the new generation and those threats which do not yet exist, but may appear.

Representatives of the U.S. air force to explain that in 2001, when he was chosen the construction of a single strike fighter, the main threats were concentrated in Europe, is a family of anti-aircraft missile systems s-300. Now a new air defense equipment appears not only in Russia but also in China and throughout Asia.

The air force explains that the digital anti-aircraft missiles of Russian and Chinese production can change the frequency and have great mobility.

Ground threat air defense systems are very serious, as the existing system, according to experts, detect enemy planes in the removal of hundreds of kilometers.

Further, in developed and in future integrated air defense systems apply faster computer processors, integrated into a common network and capable of detecting targets over a wider range of frequencies. These characteristics, as well as the ability to detect aircraft at a greater distance give defenses new opportunities to detect even stealth aircraft, and in some cases they do it with a radar of the circular review.

Recently in mass-media there were messages that the stealth technology is useless against Russian air defense systems. Russian s-300 and s-400 are among the best in the world. In addition, the publication The National Interest reported today that Russia is working on anti-aircraft missile system s-500, which can hit even subtle targets up to 200 kilometers.

When the air force is preparing for the unlikely scenario of the situation in which an American air force will have to engage in battle with nearly equal forces of Russia or China, it recognizes that the greatest concern to him cause air defenses of those countries. The developers of F-35 aircraft emphasize that although there are no conflicts with these countries and the buyers of these funds is not expected, the air force want to be ready for any unforeseen circumstances.

The F-35 aircraft from the air force, use large polygons to check their capacity to overcome current and future air defense systems. But still many work because of the threats of the future are high-tech, modern, and they appear very quickly. According to the designers, here in preparation to counter these threats, great importance is computer simulation and simulators.

The air force plans in 2018 to pose a threat and weapons of the new generation to the first lesson in the school of arms.

The F-22 from Langley air base in Virginia will be able to prepare for scenarios of air combat with the F-35 at air force base Nellis in Nevada.

The pilot of the F-35 can use a radar with active phased antenna array (AFAR) for the detection of enemy air defense systems and to avoid them. Airborne AESA uses a synthesized aperture to create a picture in the air and on the ground. AFAR also provides the F-35 electronic warfare.

The idea of modernization of the F-35 provides for the creation of on-Board systems that can be updated with the emergence of new threats and software. Such equipment as radar AFAR, means of active radio-electronic jamming and defense and some on-Board data handling system can be upgraded to keep pace with emerging threats.

In that case, if the F-35 will not be able fully to evade ground-based air defenses of the enemy, the pilot will have to use speed, maneuverability and their combat skills to defend against enemy strike weapons and systems.

Unified strike fighter can reach a cruising speed of 1,700 kilometers per hour, bringing it to M=1.6. They say that the F-35 in maneuverability and speed are not inferior to F-15 and F-16, but has a vast Arsenal of additional features and capabilities.

In General, the air force plans to buy 1 763 multipurpose fighter F-35A, and eventually they will form the basis of fighter aircraft, with two thousand fighters. Today the air force act 83 F-35A.

In the development and design software single strike fighter has many combat possibilities, which can be improved. Each of them is designed to upgrade the technical characteristics of the car. In the system of the F-35 has more than 10 million individual lines of code.

Soon, the air force on the F-35 will be the most modern version of software called 3F. But engineers have already started work on a new replacement FOR 4F, which will be ready by 2020 or 2021. After the first replacement under the new options will appear at the plane gradually every two years, to equipment of the air force did not lag behind emerging threats.

According to representatives of the air force, the first portion of budget funding FOR Block IV was included in the 2014 budget.

This upgrade (Block IV) will include the unique armaments of the partner countries, such as Britain, Turkey and some countries in Europe, said representatives of the air force.

Block IV will increase the range of weapons of the American fighter. In their calculations, the designers and engineers lay Block 4 opportunities for dealing with those defenses and weapons that may appear the enemy in the period from 2020 to 2040 years and even later.

As for weapons, the modernization variant of the F-35 Block IV will have the most modern systems such as bombs small diameter (Small Diameter Bomb II) and GBU-54. These aircraft weapons will destroy the enemy target in motion.

The small diameter bomb Small Diameter Bomb II uses a guidance system that can operate in three bands: infrared, millimeter-wave and laser. The combination of these sensors allows the weapon to track and hit moving targets in all weather conditions.

A new generation ON 4F will be the development of previous software systems of the aircraft.

In Block 2B used the ideas of modern weapons simulators, the possibility of automatic data transfer, as well as integrated detection system from earlier Block 2A. Block 2B allowed the fighter to provide close air support and launch missiles “air-air” AMRAAM (advanced missile of class “air — air” medium-range), and JDAM (guided bomb with a conventional warhead) and GBU-12 (laser-guided bombs).

After Block 2B, Block 3i appeared, which allows to further improve the combat capabilities of the aircraft. And Block 3F will have improved capabilities for suppression of enemy’s air defense systems.

Block 3F will improve the means of delivery of weapons the F-35 to the target, and the aircraft will gain the ability to drop small diameter bombs, 500-pound JDAM and the launching of missiles “air — air” short-range AIM 9X.

AIM 9X is in service in the air force and Navy, and has a thermal targeting system.

Recently the F-35 was first used missile AIM-9X Sidewinder on the Pacific sea test range, as reported by officials from the Pentagon.

According to the statement, the air force, the F-35 aircraft took off from Edwards air base (California) and made the rocket from a height of 1 800 metres.

In the framework of the F-35 is being developed and weapons for firing offset from the line of sight. That is, such a weapon can strike targets that are not in front of the plane, and having a large side corners.

According to representatives of the military Department, the AIM-9X superior maneuverability due to thrust vector control, as well as added integration with helmet-mounted display that allows them to compete with objectives with large displacement from the line of sight.

Unified strike fighter F-35 completed the first flight trials from 25 mm Gatling guns, placed in the left wing of the aircraft. According to Pentagon officials, the test was held on 30 Oct 2015 in California.

“This was the first of a series of tests carried out with the goal of functional assessment in-flight built-in cannon of the F-35A of caliber of 25 millimeters when performing different tasks in different conditions,” — noted in the published statement of the military Department.

Gatling gun will significantly enhance the capability of the multirole fighter, allowing him to effectively conduct the air battle and provide close air support to ground troops.

The weapon with the index GAU-22/A is constructed and installed on the airplane in such a way that it retained its stealth characteristics.

Four-barrel rapid-fire aircraft gun caliber of 25 mm is designed for firing at the enemy with a high density of the lesion and to quickly destroy targets. According to the company General Dynamics, the gun can do 3 300 rounds per minute.

“Of the four-barrelled 25-mm aircraft gun GAU-22/A was done in three stages: one 30 rounds and two 60 rounds. When placing the gun in the airframe of the aircraft engineers had to hide her inside to reduce the effective surface scattering to the start of shooting”, — reads the statement of the Pentagon.

The first phase of testing included 13 firing ground, held for three months. The purpose of the tests was to check mate the gun with the F-35A.

“After this test, the test team was allowed to begin the second phase of tests to assess characteristics of the gun and it mates with the frame of the plane when firing in the air at different flight conditions and configurations of a fighter,” — said in a statement.

The new gun will also be integrated with the software of the F-35, so that the pilot could see the target on his helmet-mounted display and destroy them.