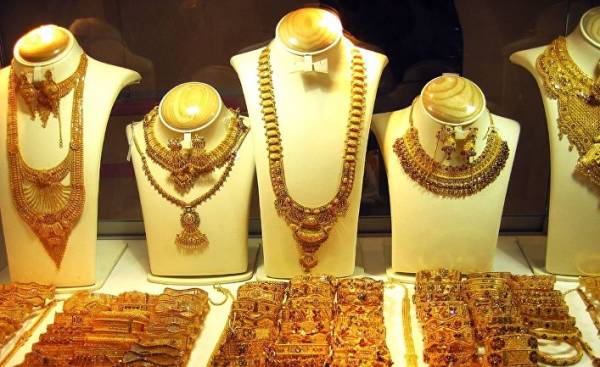 Currently in the Arab world, the rise of marriageable age. The reason is the high cost of dowry, increasing the cost of acquiring the dwelling as well as the costs of organizing the celebration. However, those who insist on respect for religious traditions while creating a family nest, I found an alternative to the high price of gold, known as “Russian gold”. Jewelry reminiscent of expensive metal, however, are not real gold. The advantage of such products is low price and sophistication of the models, making them buy and wealthy citizens.

Russian gold has become part of the tradition in the Jordanian weddings. Against the backdrop of high gold prices and challenging economic conditions a significant portion of Jordanian families began to buy Russian, not pure gold, to facilitate marriage and to relieve the groom’s expense, which he cannot afford. Such decision shall be made by agreement between the bride and groom.

On the other hand, there are those who reject this method, and the wedding was suspended, because the bride’s side opposed to her wearing jewelry is not pure gold. Meanwhile, the “Russian gold” to acquire not only people with low income and wealthy families, because it is made from ornaments, models are difficult to find among the products of real gold.

“Russian gold” composed of gold or contains a small amount of gold and used for the manufacture of female ornaments in a number of countries. Social workers read that one of the reasons for the increase in the number of single women and singles in Jordan is that they can’t afford the gold prices on the global and local markets. As a result, many Jordanians have to postpone the wedding date or cancel it completely.

Jeweler Youssef Naimi says that citizens tend to buy gold jewelry, which is called “Russian gold”, but these products are not real gold and have nothing to do with Russia, and does not represent any value. These ornaments are considered as the so-called accessories.

According to the jeweler, the Jordanians call these products “Russian gold” for the reason that in the early 90-ies of the last century there were a lot of street vendors that sold the accessories, claiming that they are from Russia. Despite the fact that the name has no real basis, it is used until today.

Says Naimi, these products can be locally produced and can be imported from some European and Asian countries, such as Italy, Taiwan and India, but not specifically from Russia. This is confirmed by the assistant Director-General of the Customs Department of Jordan Abdel Wahab Al-Zurara, who claims that there are no customs data indicates that import of such accessories is carried out from Russia. He also said that their name is used in a figurative sense and has no basis in reality.

According to experts specializing in the evaluation of gold jewelry, Ferial al-Hususi, “Russian gold” is not gold at all, and in him there is no gold in principle. It’s just an accessory. The specialist noted that some buyers can become victims of traffickers who will claim that they sell real gold, the prices for these products will be above their real value, but they are not subject to any control or inspection.

As pointed out by al-Khusus, fake gold can be cast in the same form as the present, which makes them very similar. Some gold traders are also victims of fraud by those who sell them products that are allegedly made of gold, but when they break it appears that they are false. In addition, gold traders, especially beginners, it is sometimes difficult to distinguish real gold from a fake, because fake products have the same stigma.

Al-Khusus advises poor couples be limited to the purchase of the Golden ring, instead of entering the bride fooled by means of fakes since it can cause many social problems, the awareness of which is due to the large experience Ferial al-Khusus in the field of expertise of gold jewelry.

Chairman of the Association of manufacturers of gold Osama IMSA claims that perhaps this type of accessories made from copper plated with gold, and they do not represent any value. He noted that the Association is not against the trafficking of such accessories, however, the problem arises when the vendors of these products release goods for real gold.

As for what accessories called “Russian gold”, according to Imsaa, this title pursues commercial goal. It’s not gold and it’s not from Russia, it’s just a generic term, like “American diamond” while no American diamond does not exist, but there is a kind of stone that is used for decorations of real gold, these stones are called cubic Zirconia.

Rashid says: “the Crazy rise in gold prices has pushed me and my fiancée to buy a “Russian gold” and other accessories. It is assumed that she will wear them at the ceremony before our guests, because according to the traditions in our society the bride is supposed to wear gold at a wedding.”

His fiancee Samira explained: “When Rasheed came to Woo me, my family gave him a condition that part of the dowry must include jewelry made of gold worth 2500 dinars (one Jordanian Dinar equals 84,72 of the ruble according to 11.08.2017 — approx. ed.), in addition to furniture, houses and other necessary things for marriage. However, to speed up the wedding, we had agreed to purchase “Russian gold”, which is very similar to the present, and I wear it to the wedding ceremony. I bought several of these products, which, in my opinion, look nicer and more expensive than real gold. In addition, the products have a lovely, graceful form, and no one looking at them cannot tell that they are made of “Russian gold”.

Samira confirms that her parents are insisting on their demands, led them to resort to such out of the situation, and many couples face the same problem. According to the social workers, the difficult economic conditions, which are home to most families, and that the bride’s family usually requires the groom purchase yellow gold as dowry, while the price is increasing, forcing many couples to purchase and to wear on the wedding “Russian gold”.

In many cases, to complete the wedding ceremony, the groom agrees to the bride about this alternative, or the decision together with the bride’s mother, her daughter and fiancé. In most Arab countries the tradition of wearing real gold becomes a reason for the late marriage. As noted by social workers, this tradition has existed for decades, and it is necessary to change the customs, because the current situation is different from what it was in the past.

“I am an ordinary employee who earns an honest living. My salary is 300 dinars and I had already chosen his bride, but her family demanded jewelry worth 5,000 dinars and I was thinking about moving the date of engagement, until I gather the necessary amount. However, the father of my bride took the initiative to solve this problem and make the engagement in the near future. It is suggested to buy products from “Russian gold”, the more that people do not distinguish one kind of gold from another — they all Shine equally,” says Fadi. 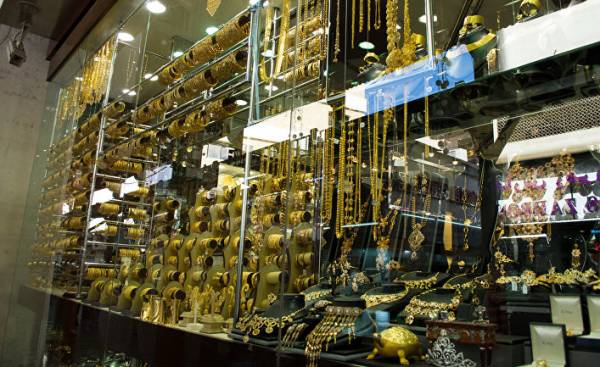 © flickr.com, Ajay Hiree in a jewelry store in Dubai, UAE

According to Hay al-Khuzai, Professor of sociology, University of El-Balka, gold is one of the foundations of marriage, and the issue should be resolved by mutual agreement between the party of the bride and groom, but it must not become an obstacle to marriage. Should not be the case that the groom is unable to buy it because gold is purchased by the couple, regardless of the value of this metal, is not the key to happiness in family life, as a real family life begins after marriage, and the presence of gold or absence in no way affect the family happiness. Husband and wife should find happiness in the psychological, social, economic and emotional stability in the family.

A University student named Sirin believes that “Russian gold” has become the solution for those wishing to be married couples with low income. So, when the girls take such accessories as an alternative to gold, it helps to create a favorable atmosphere for communication between young people, in this case, the gifts become something symbolic and reinforce the bonds of love. In addition, she realizes that with the help of “Russian gold” she can escape the gossip about her and her fiance.

According to Sirin, smart girl the one that uses the difference in the price of real gold on more important things, such as, for example, honeymoon, savings, and any other purpose that she agreed with my fiance.

The phenomenon associated with “Russian gold” lodged in the hearts of men the love of gossip. Many women confirmed that they had been guests at a large number of weddings and I know that people usually gossip about what the gold gifted to the bride is “Russian”.

Someone begins to speak that the bride began to deceive the bride before walked into her home, while others assert that, apparently, he does not love her, because he has not bought her jewelry worthy of her beauty. Sometimes girls begin to Obinitsa messages with your friends, telling them that this girl kept their photos with the “Russian gold” and many more.

Local media reported the scandal, which occurred in a wedding hall in Amman in the summer of 2015 between the groom and bride during the ceremony of gold jewelry. The scandal broke after the bride’s family with experience in the sale of accessories found that it presented “Russian gold”. So, when the groom put on the bride’s decoration, one of her relatives said, “You know what it is “Russian gold”? I swear that it is Russian, I work in this field and know how to distinguish the accessory from real gold”. These words led to a quarrel between the parties of the bride and groom.

The groom in turn tried to convince the bride’s side that he needed the money to prepare the house and organizing the wedding, but they insisted to pause the wedding. The girl’s mother, according to witnesses, said the groom: “I was the first to notice that you’re a fraud, and was against your marriage, but my daughter is stupid and she insisted that you were married!”

In the end, all the invited guests left the hall for the celebration, and on their faces we could read the surprise. Finally, the groom shouted to the woman, found that gold is not present: “May Allah destroy your house, as you ruined mine!”

Jeweler Osama IMSI believes that the high cost of dowry can not be a reason for cheating among couples who are getting married. To buy fake gold you need the consent of both parties, that is, the achievement of mutual understanding between them. Many people realize that they need to buy a wedding ring made of real gold, and there is no need to laugh at ourselves, buying a large quantity of fake gold that has no value.

Another jeweler says: “We are accused that we are the cause of conflict between families, when some young people decide to buy fake gold and present it to their brides as a present.” However, the problem is not those who sell gold, or can provide an invoice indicating that the gold isn’t real, and that many brides are faced with financial problems.